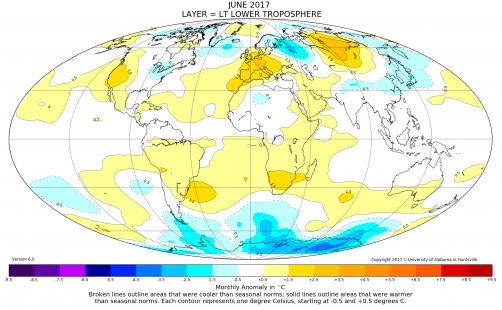 Cooling in the Southern Hemisphere led to an average global temperature drop of about two tenths of a degree Celsius in June, according to Dr. John Christy, director of the Earth System Science Center (ESSC) at The University of Alabama in Huntsville (UAH). The global average of 0.21 C warmer than seasonal norms was the coolest value since July 2015 and the start of the 2015-16 El Niño Pacific Ocean warming event.

Compared to seasonal norms, the coldest place on Earth in June was in the eastern Antarctic near Dome C. Temperatures there averaged 4.43 C (about 7.97 degrees Fahrenheit) colder than seasonal norms.

Compared to seasonal norms, the warmest place on Earth in June was near the town of Inarigda in central Russia. Temperatures there averaged 3.07 C (about 5.53 degrees Fahrenheit) warmer than seasonal norms.

The satellite-based instruments measure the temperature of the atmosphere from the surface up to an altitude of about eight kilometers above sea level. Once the monthly temperature data are collected and processed, they are placed in a "public" computer file for immediate access by atmospheric scientists in the U.S. and abroad. Temperatures in the tropics are essentially “normal” relative to the 30-year average.

The complete version 6 lower troposphere dataset is available at: