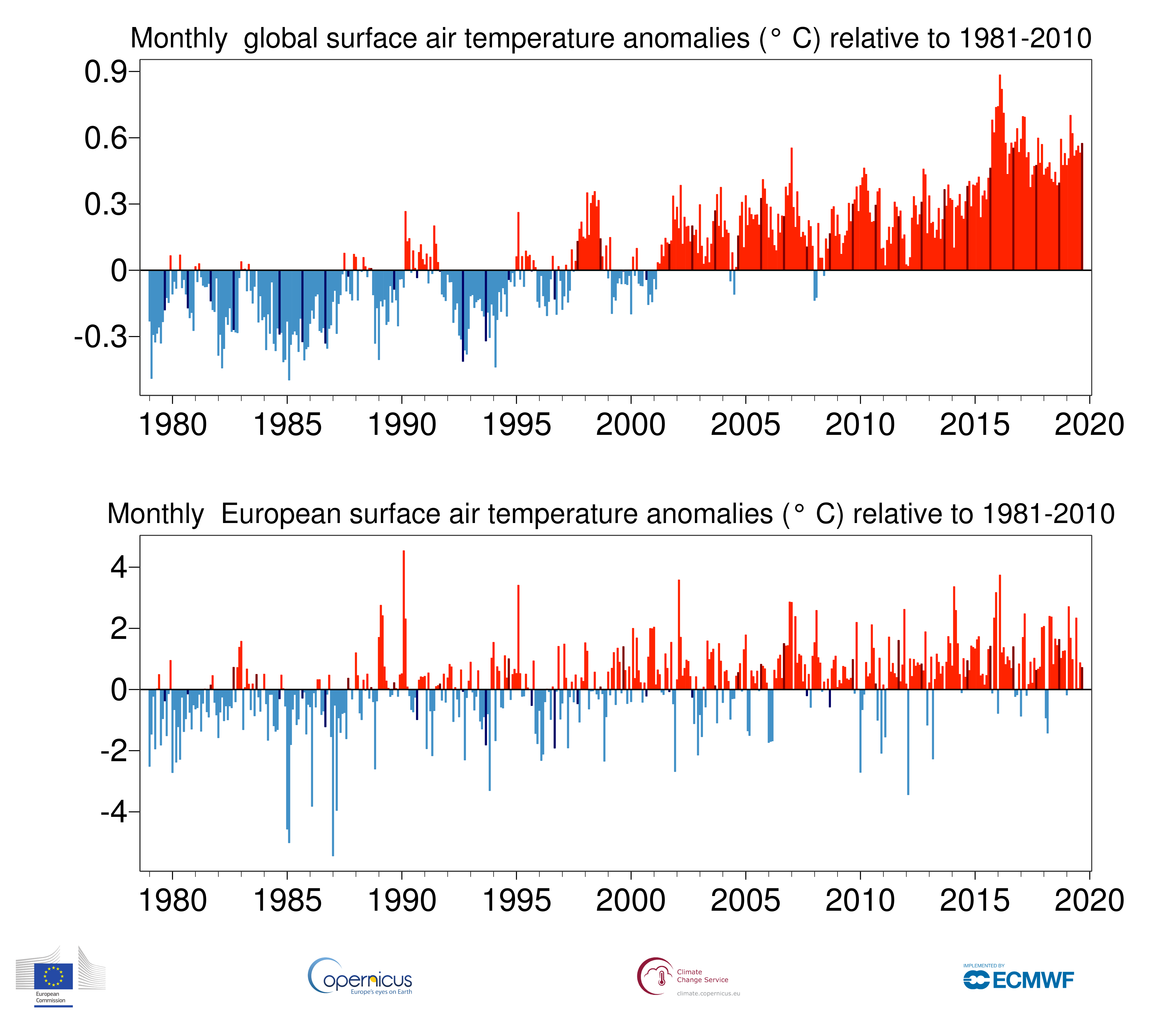 CAUTION: There appears to be a problem with the raw satellite data for September 2019. These September results are very preliminary and should be used with caution.

September’s globally-averaged, bulk-layer atmospheric temperature anomaly of +0.61°C (+1.10°F) represented the warmest September reading of the past 41 Septembers in our satellite record. The jump from August was substantial (+0.23°C) and ranks among the largest month-to-month changes. (Several previous jumps were greater than 0.3°C however.) The warmth was global in extent with warmest September temperatures posted for both hemispheres and the tropical belt. This month-to-month heating is possibly related, at least in part, to the tropical Pacific Ocean’s loss of heat energy to the atmosphere in the recent months as El Niño conditions declined. The impact of additional greenhouse gases in the atmosphere over the last 41 years plays a role as well in terms of the slow, longterm rise, though the magnitude of this effect is uncertain. Though this is the warmest September departure from average recorded by satellites, other months, especially those in the heart of the El Niño cycle (Feb-Apr) achieved departures exceeding 0.7 °C.

Globally, locations with sustained warmer-than-average temperatures for the month appeared over the SE and NE Pacific Ocean (the latter known as the warm “blob” by coastal residents there). The Arctic warmth in the western hemisphere was associate with the warmest local temperature anomaly in Northern Greenland of +3.2°C. Other warm spots were central South America eastward across the South Atlantic to South Africa, parts of the Middle East and much of central China.

The planet’s coldest departure from average this month was -2.9 °C in western Russia near Khmelevka on the Kazakshstan border. Other cool areas were seen on the south Greenland Plateau, South Indian Ocean, NW Pacific Ocean and portions of Antarctica.

The complete version 6 lower troposphere dataset is available here: http://www.nsstc.uah.edu/data/msu/v6.0/tlt/uahncdc_lt_6.0.txt Archived color maps of local temperature anomalies are available on-line at: http://nsstc.uah.edu/climate/ Neither Christy nor Spencer receives any research support or funding from oil, coal or industrial companies or organizations, or from any private or special interest groups. All of their climate research funding comes from federal and state grants or contracts.