The global temperature anomaly for May 2018 changed only slightly from April, with the Southern Hemisphere dropping to its coolest measurement in five years. However, we do see some regional hints of changes to come. The tropical tropospheric temperature moved slightly into positive territory indicating, as NOAA has announced (http://www.cpc.ncep.noaa.gov/products/analysis_monitoring/lanina/enso_evolutionstatus-fcsts-web.pdf), that the cool tropical Pacific condition known as La Niña is over and that we may see-saw back to the warm pattern of El Niño this coming winter. Stay tuned.

The complete version 6 lower troposphere dataset is available at http://www.nsstc.uah.edu/data/msu/v6.0/tlt/uahncdc_lt_6.0.txt 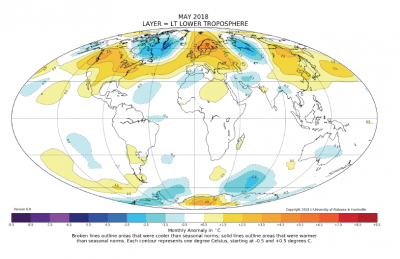