This short foot exercise can help prevent common injuries like shin splints, plantar fasciitis, stress fractures, bursitis, and tendonitis in the Achilles tendon. Patrick McKeon, a professor in the Ithaca College School of Health Sciences and Human Performance, explains how to do the exercise properly. 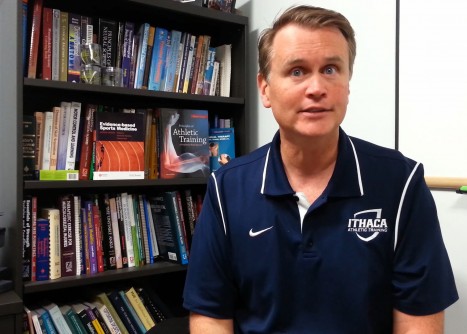 Newswise — As your cold-weather footwear makes the seasonal migration from the back of your closet to replace summer’s flip flops and bare feet, don’t underestimate the benefits of padding around naked from the ankles down.

Barefoot activities can greatly improve balance and posture and prevent common injuries like shin splints, plantar fasciitis, stress fractures, bursitis, and tendonitis in the Achilles tendon, according to Patrick McKeon, a professor in Ithaca College’s School of Health Sciences and Human Performance.

The small, often overlooked muscles in the feet that play a vital but underappreciated role in movement and stability. Their role is similar to that of the core muscles in the abdomen. “If you say ‘core stability,’ everyone sucks in their bellybutton,” he said. Part of the reason why is about appearance, but it’s also because a strong core is associated with good fitness. The comparison between feet and abs is intentional on McKeon’s part; he wants people to take the health of their “foot core” just as seriously.

"Those interactions become a very powerful tool for us,” he said. When that feedback loop is broken, though, it can lead to the overuse injuries that plague many an athlete and weekend warrior alike.

Shoes are the chief culprit of that breakdown, according to McKeon. “When you put a big sole underneath, you put a big dampening effect on that information. There's a missing link that connects the body with the environment," he said.

Muscles serve as the primary absorbers of force for the body. Without the nuanced information provided by the small muscles of the foot, the larger muscles over-compensate and over-exert past the point of exhaustion and the natural ability to repair. When the extrinsic muscles are no longer able to absorb the forces of activity, those forces are instead transferred to the bones, tendons, and ligaments, which leads to overuse injuries.

It’s not that McKeon is opposed to footwear. “Some shoes are very good, from the standpoint of providing support. But the consequence of that support, about losing information from the foot, is what we see the effects of [in overuse injuries]."

The simplest way to reintroduce the feedback provided by the small muscles of the foot is to shed footwear when possible. McKeon says activities like Pilates, yoga, martial arts, some types of dance, etc. are especially beneficial.

"Anything that has to deal with changing postures and using the forces that derive from the interaction with the body and the ground [is great for developing foot core strength],” he said.

McKeon also described the short-foot exercise, which targets the small muscles by squeezing the ball of the foot back toward the heel. It’s a subtle motion, and the toes shouldn’t curl when performing it. The exercise can be done anywhere while seated or standing, though he recommends first working with an athletic trainer or physical therapist to get familiar with the movement.

He notes the exercise seems to have especially positive results for patients suffering from ankle sprain, shin splints, and plantar fasciitis. It’s even been shown to improve the strain suffered by individuals with flat feet.

The payoff could be more than just physical, as there could be financial savings. With strong feet, McKeon suggests that – depending on the activity – consumers may not need to invest hundreds of dollars in slick, well-marketed athletic sneakers (though he doesn’t recommend going for the cheapest of cheap sneakers, either). People with a strong foot core can actively rely on the foot to provide proper support, rather than passively relying on the shoes alone.

“You might be able to get a $50 pair of basketball shoes that don’t have the typical support that you'd expect. Because you have strong feet, you're just using the shoes to protect the feet and grip the ground," he said.

The easiest way to get started on strengthening the small muscles of the foot, though, is to kick off your shoes in indoor environments.

“The more people can go barefoot, such as at home or the office, is a really good thing,” McKeon said.