By using bacterial flagella as a template for silica, researchers have demonstrated an easier way to make propulsion systems for nanoscale swimming robots. 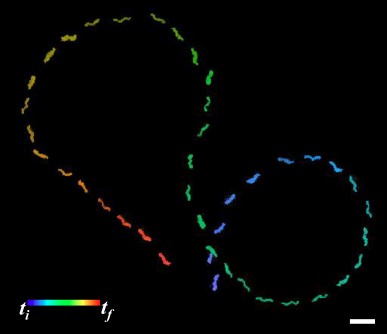 Trajectory of a templated helical silica nanoswimmer manually controlled to move in an approximate figure-eight pattern; scale bar is 5 μm.

Newswise — WASHINGTON, D.C., November 30, 2017 -- A feature of science fiction stories for decades, nanorobot potential ranges from cancer diagnosis and drug delivery to tissue repair and more. A major hurdle to these endeavors, however, is finding a way to cheaply make a propulsion system for these devices. New developments may now propel nanoswimmers from science fiction to reality thanks to unexpected help from bacteria.

An international research team has demonstrated a new technique for plating silica onto flagella, the helix-shaped tails found on many bacteria, to produce nanoscale swimming robots. As reported this week in APL Materials, from AIP Publishing, the group’s biotemplated nanoswimmers spin their flagella thanks to rotating magnetic fields and can perform nearly as well as living bacteria.

“We have shown for the first time the ability to use bacterial flagella as a template for building inorganic helices,” said MinJun Kim, professor of mechanical engineering, Lyle School of Engineering at Southern Methodist University and one of the authors of the paper. “This is quite a transformative idea and will have a great impact on not only medicine but also other fields.”

Compared to larger forms of aquatic motion, nanoswimming hinges on an understanding of the Reynolds number, the dimensionless quantities that relates fluid velocity, viscosity and the size of objects in the fluid. With a Reynolds number of one-millionth our own, bacteria must use nonreciprocal motion in the near absence of inertial forces. Using helical tails made of a protein called flagellin, many species of bacteria navigate these microscopic conditions with relative ease.

“If we were shrunk down to the size of a bacteria, we would not be able to use the breast stroke to move through water,” Kim said. “If bacteria were the size of us, they could swim 100 meters in about two seconds.”

Other recently developed methods for constructing these helical structures employ complicated top-down approaches, including techniques that involve self-scrolling nanobelts or lasers. The use of this specialized equipment can lead to very high startup costs for building nanorobots.

Instead, Kim’s team used a bottom-up approach, first culturing a strain of Salmonella typhimurium and removing the flagella. They then used alkaline solutions to fix the flagella into their desired shape and pitch, at which point they plated the proteins with silica. After that, nickel was deposited on the silica templates, allowing them to be controlled by magnetic fields.

“One challenge was to make sure we had helices with the same chirality. If you rotate a left-handed helix and a right-handed helix the same way, they will go in different directions,” Kim said.

The team took their nanorobots for a spin. When exposed to a magnetic field, the nanorobots kept up the pace with their bacterial counterparts and were projected to be able to cover 22 micrometers, more than four times their length, in a second. In addition to this, the team was able to steer the nanoswimmers into figure-eight paths.

While Kim said he sees potential for nonconducting nanoscale helices in the area of targeted cancer therapeutics, he added that with his team’s work, one might plate conductive materials to flagella and produce helical materials for electronics and photonics. 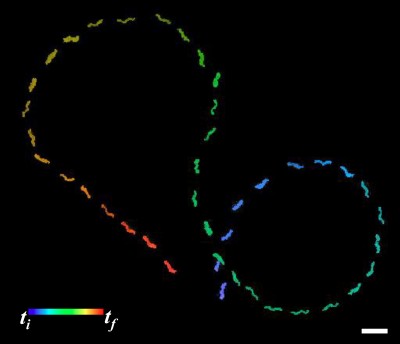