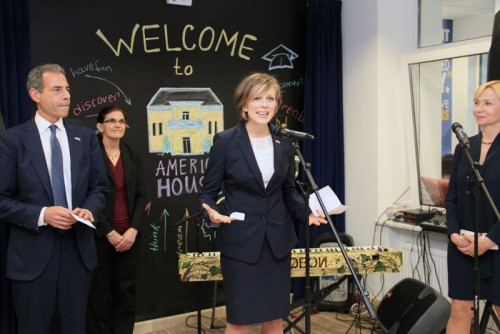 Christi Anne Hofland speaks to media at the opening of America House in Kyiv, Ukraine in May 2015. 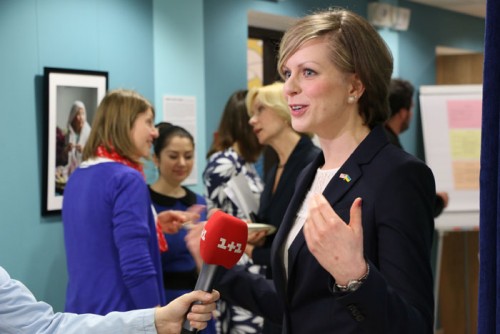 A slideshow from America House in Kyiv, Ukraine.

America House is an island of peace in a nation facing its most prolonged crisis since its post-Soviet independence began in 1991. Drawn by a keen interest in the United States and a hunger for civil reform, nearly 17,000 curious Ukrainians have visited America House since the U.S. Embassy opened it in May.

“Many Ukrainians see the U.S. as the country that possesses the democratic ideals they are striving for in their country,” said Hofland, adding that Ukrainians also come to the center to develop their English language skills – a key to Ukraine’s economic development – and to access resources and training to develop their ideas.

"People come to discuss Ukraine's most pressing issues. It's also a place to sing, laugh, and have some relief from the crisis that has affected every corner of their lives,” said Hofland, who majored in art with minors in entrepreneurship and dance. “We believe that conversations are key to innovation and change and we provide a platform for conversations to take place. Before America House there wasn’t an ideal space for these conversations.”

Just last week America House hosted Anne Applebaum, a columnist for the Washington Post and Slate who directs the Transitions Forum at the Legatum Institute in London, on a panel with Ukrainian journalists to discuss ways journalists can counter propaganda.

"After that, we had another panel about upcoming local elections in Kyiv. Many people are still poorly informed about how the election process works in Ukraine," Hofland said.

For Hofland, who earned a dual master’s degree in international studies and public administration from University of Washington, the work ideally blends her interests, experience and education.

“It’s all the things I love and all my experiences in education, culture, and the arts applied to diplomacy and international relations in a country whose future I care deeply about,” she said. “People say you can’t get a job in the arts. It’s not true.”Hofland finds herself at the vanguard of U.S. international diplomacy.

“This is a new model for American spaces abroad and there is a real need – especially considering what’s going on in Ukraine. It demonstrates how diplomacy and people-to-people engagement can be so effective,” said Hofland.

Foreign Studies FascinationHofland’s fascination with international studies began at age 11 when she spent six months with her family in Kharkiv, Ukraine, where her father, John Hofland, was a Fulbright Scholar (before becoming director of Gonzaga’s theatre program). The Gonzaga-in-Florence program allowed her to visit much of Western Europe and parts of Africa. Through a 10-month Fulbright Fellowship in Odessa, Ukraine, in 2008-09, she started a drawing program at a children’s hospital and taught methods of art pedagogy in schools, orphanages, children’s centers, and universities.

Following her Fulbright and a two-year stint teaching English at Ukrainian Catholic University in Lviv that allowed her to tour widely in Europe and parts of Africa, her UW graduate studies offered further international experience and an internship at the U.S. Embassy in Ukraine.

Leatha taught Hofland’s senior business incubation class, and remembers the “Experience Art” project she developed with another student that finished second in the annual competition.

“Christi Anne always was the character because she was the artist,” said Leatha, who remembers praise Hofland received from a Spokane Arts Commission internship and a New Venture Lab project that helped the Spokane YMCA decide to maintain a downtown presence. “She made a presentation that blew the socks off the YMCA Board. Even before she graduated, she was just one of those outstanding people that everyone wants to be around because of her energy and personality.”

Karen Mobley, former arts director for the City of Spokane, directed one of Hofland’s internships.

“Christi Anne is, and always has appeared to be, fearless,” Mobley said. “It has been wonderful to watch her grow from a theatre and art student with interest in business and leadership to the new role she has on the world stage in Ukraine.”

“Have passion, think outside the box, listen carefully, and then do what you want,” Hofland told students. “Along the way, adapt, persist, and have fun!”

Hofland is doing just that in her pioneering work in Ukraine.

“It’s really about people and connecting people, so I’m excited to be involved,” she said. 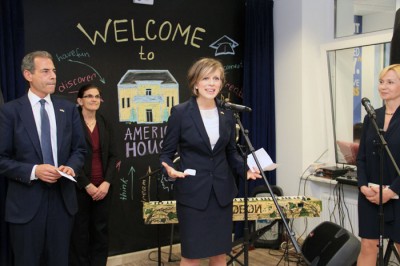 Caption: Christi Anne Hofland speaks to media at the opening of America House in Kyiv, Ukraine in May 2015. 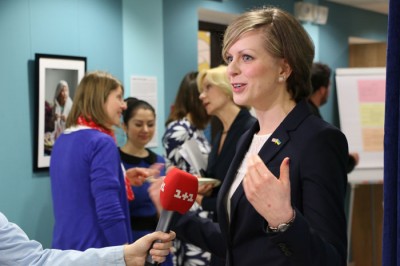