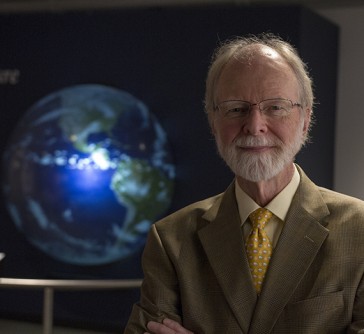 “Climate change poses a great challenge to global communities. We are recognizing these two great scientists for their enormous contributions to fighting climate change through increasing our scientific understanding of how Earth’s climate works, as well as bringing together that knowledge for the purpose of policy change,” Julia Marton-Lefèvre, chair of the Tyler Prize Committee, said Tuesday.

A professor of biological oceanography who earned a bachelor’s degree in biology from Gonzaga in 1966, McCarthy was honored for his pioneering research on marine nutrient cycles, which has significantly increased understanding of human activity on Earth’s climate, and for his work engaging with some of the world’s best environmental researchers and international policy leaders to assess the global impacts of climate change.

McCarthy said he was glad he was sitting down when the call came about winning the award.

“If I look at this list of past recipients of the Tyler Prize, they are my heroes, they are the people I always look to and most admired for their accomplishments in this area. So, it’s really quite humbling to be a part of that group,” said McCarthy, who spearheaded development of the International Geosphere Biosphere Programme. The science produced by this effort was a key component of the Nobel Peace Prize-winning Intergovernmental Panel on Climate Change (IPCC), which McCarthy co-chaired in 2001. McCarthy also served as president of the American Association for the Advancement of Science.

“His ability to effectively, and eloquently communicate the importance and risks of the climate crisis are unparalleled,” said former Vice President Al Gore, who shared the 2007 Nobel Prize with the IPCC. Established in 1973 by the late John and Alice Tyler, the award carries a $200,000 prize to be shared by the recipients.

In an interview, McCarthy – a recipient of Gonzaga’s Distinguished Alumni Merit Award in 1993 – said he was also honored to return to his alma mater in 2008 to deliver the annual O’Leary Distinguished Scientist Lecture, which honors the late Father Timothy O’Leary, S.J., Gonzaga priest and chemistry professor from 1933 until his death in 1975.

“That was a very special honor because I credit Father O’Leary with my passion for science. He was a very, very influential person in my undergraduate education. As a result of his encouragement and my just falling in love with the material that he was teaching, it really gave me a sense of opportunity for a career that was always in the back of my mind,” McCarthy said. “It was a particularly important intersection for me to keep in mind people like Fr. O’Leary as one of my mentors in life. I am sure I would not have gone as far as I have or been as successful without that opportunity.”

McCarthy remembers taking organic chemistry from Fr. O’Leary, a course many students dreaded but had to pass to gain admission to medical school.

“I fell absolutely in love with it. It was probably my favorite course in college. I credit him for that. I always felt a little out of place as I enjoyed it,” he said. “I was enthralled with it. It just came to me in a way that was embarrassing at times.”

McCarthy said his GU undergraduate education influenced his decision to pursue a doctorate from Scripps Institution of Oceanography.

“One of the reasons that I decided to pursue graduate studies in ocean science is I had such a terrific experience not only in biology but chemistry, biochemistry, zoology, botany, genetics, ecology and physics at Gonzaga and I didn’t want to restrict my career opportunities by saying ‘I’ll be a biochemist or a zoologist.’ I wanted a career to draw from all of those fundamental sciences,” he said. “The confidence to do that came from the classes I took in the natural sciences. I’ve often thought that about that and about how different it could have been had I been at another school and if I had not been inspired or felt the world of science was not for me. I feel blessed having had that experience.”

As a sophomore, McCarthy also was in the inaugural class of Gonzaga-in-Florence, Italy, the University’s flagship study abroad program, an experience he also credits as a part of his success.

“I had an incredible introduction to art history, and really enjoyed the philosophy, history and literature courses I took in Florence. They whet my appetite for intellectual curiosity and made me want to pursue an academic career,” he said. “That rounding out of my education with the humanities and the arts was also an important part of what Gonzaga did for me.”

“Most people, even well-read, educated people, have not had the background of science to understand in any technical way what I think is important about the Earth today and how it’s changing,” he said. “Scientists tend to think, ‘well these decisions society makes should be fully informed by science and once you have the science you should make the decisions.’ But it’s much more complicated than that.”

To effectively inform public policy change, scientists must put themselves in the shoes of decisionmakers, he said.

“Being able to communicate the science or relate its importance even in a general way, I think the understanding based on humanities and the arts is absolutely essential to that,” he said. “It’s very hard to stand in other people’s shoes. You can’t do that from the perspective of just a scientist. What’s important to people why is it important to them? That takes patience and a perspective that is not one that comes out of the natural sciences.”

He is optimistic about humankind avoiding the most serious consequences of climate change.

“One reason for that comes from this privilege I have had from being in an academic setting interacting with young people today who are aware of this problem and what must be done,” he said. “The choices they make – whether they are a business person, academic, civil servant, no matter what they are doing – they will be in a position to drive us toward a solution.”

A simple way for people to think of climate change is as a “2-percent problem,” he said.

If all of us could reduce our consumption of carbon-based fuels by 2 percent a year – through greater efficiency or changing energy sources or insulation – climate change would be solved.

“We can do it. We need to convey that sense of optimism that we know how to do it,” he said. “For the average person in this country this is not a big reach, 2 percent a year.”

In addition, he sees cities and states as the governmental entities most likely to lead climate change solutions.

“Cities – Seattle, Portland, San Francisco – where mayors have to be accountable to the public, they are not partisan the way our national politics are,” he said. “Increasingly, the public is saying, ‘figure out how to move from being a source of the problem to a source of the solution.’ It’s heartening to see that is beginning to take hold in many states and cities. The roles of cities and states are particularly important when leadership is lacking at the national level.”

McCarthy and Falkowski will be officially presented with the Tyler Prize in a ceremony May 3 at the Willard Intercontinental Hotel in Washington, D.C.