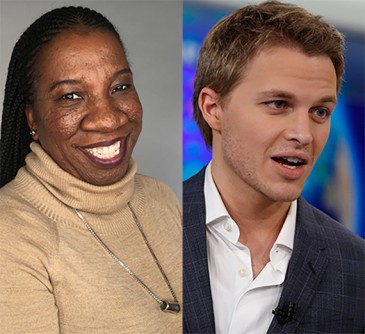 Newswise — SPOKANE, Wash. – Gonzaga University proudly announces that New York activist Tarana Burke, originator of the “Me Too" movement, and journalist Ronan Farrow, who helped break the story exposing multiple accusations of assault and harassment by Hollywood producer Harvey Weinstein, will share their perspectives on their work and the movement at 7 p.m., Friday, April 20 at the McCarthey Athletic Center.

Gonzaga President Thayne McCulloh invites the Gonzaga community and the public to attend, listen, and be inspired by Burke, who is among those recognized as Time magazine’s 2017 Person of the Year: The Silence Breakers, and Farrow, who received global recognition for his culture-shifting series of articles on Harvey Weinstein published in The New Yorker.

“This contemporary issue affects all of us. My hope is that this event provides an opportunity to engage with leaders at the forefront of this social justice movement, to better understand the epidemic of systematic sexual harassment and abuse, and to more deeply appreciate the profound cultural change the #MeToo movement represents,” President McCulloh said.

A sexual assault survivor herself, Burke first used the phrase “Me Too” as part of her work building solidarity among other survivors years before it became a viral hashtag. A powerful rallying cry that has swept the world, #MeToo amplifies the voice of victims of sexual abuse and inspires solidarity, healing, and social change.

Burke, senior director of programs at Brooklyn-based Girls for Gender Equity, has dedicated more than 25 years of her life to social justice and to laying the groundwork for a movement that was initially created to help young women of color who survived sexual abuse and assault.

Farrow is an investigative journalist who writes for The New Yorker – which published his Harvey Weinstein stories following a 10-month investigation – and makes documentaries for HBO. He has been an anchor and reporter at MSNBC and NBC News, and his writing has appeared in publications including The Wall Street Journal and The Washington Post. He is the winner of a 2018 George Polk Award, and has been nominated for the National Magazine Award, among other commendations. A Yale Law School educated attorney and a member of the New York Bar, he attended Oxford University as a Rhodes Scholar. He is also a former State Department official who worked in Afghanistan, Pakistan, and the Middle East. His upcoming book, “War on Peace: The End of Diplomacy and the Decline of the American Influence,” publishes April 24 and is currently available for pre-order.

This presentation marks the seventh Gonzaga Presidential Speaker Series event. More information will be forthcoming before tickets go on sale. Tickets for the event will be available through TicketsWest and the McCarthey Athletic Center starting March 15. Please direct ticket questions to Angela Ruff at (509) 313-3572. Media please contact Mary Joan Hahn at (509) 313-6095.