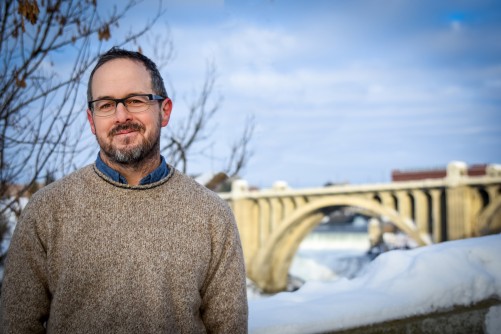 The first Eastern Washington resident to hold the position, Marshall is in his 17th year teaching at Gonzaga, where he directs the English department’s writing concentration. He started and continues to curate the Gonzaga University Visiting Writers Series. In its ninth year, the series has become a cultural gem for the region by stimulating interest in literature and reading through dynamic encounters with some of the nation’s most accomplished and respected writers whose voices express new and different perspectives.

A tireless advocate for the arts, Marshall has been dedicated to bringing humanities experiences to underserved populations. He received the 2015 Humanities Washington Award for Scholarship and Service and was appointed last spring as Gonzaga’s Robert K. and Ann J. Powers Professor Chair of the Humanities.

“Poetry matters – not just to poets, professors, and students: poetry matters to everyone,” he said. “I was a first-generation college student, and because of that I understand the skepticism that many have for the arts. But I’ve also come to realize that the inner life that the arts and humanities can nurture is important to living deliberately and introspectively. So I am interested in how poetry and all of the arts can help us find our best selves.”

“Gonzaga University is proud of Tod Marshall’s appointment as Washington State Poet Laureate. Through his teaching and writing Marshall exemplifies the potential of humanities to enhance the freedom and imagination of all people,” O’Connell Killen said. “Through his work Marshall carries forward as part of Gonzaga’s mission the project of promoting the arts as powerful resources for creativity and the common good.”

“Not only is Tod a nationally acclaimed author, he is also dedicated to creating community through his art and to serving the community in which he works, especially those without privilege. This is demonstrated by his volunteer work in schools and his sponsorship of the Gonzaga University Visiting Writers Series,” Mermann-Jozwiak said.

The Washington State Poet Laureate Program is jointly sponsored by the Washington State Arts Commission and Humanities Washington. Poets Laureate work to build awareness and appreciation of poetry – including the state’s legacy of poetry – through public readings, workshops, lectures, and presentations in communities statewide. Laureates are selected through an application and panel review process that evaluates a proposed project plan, writing acumen, and experience in promoting poetry.

Marshall said he looks forward to sharing his passion for poetry through this position.

“When I meet people throughout the state, I hope to reinforce a message that as children they probably took for granted: their voices, their words, their songs of the self, are important and need to be heard,” he said. “I am excited and honored by this appointment; the previous laureates have done such amazing work that I am also a little intimidated!”

He aims to help people find their own voices in poetry, and make poems that matter to them.

“By the end of my term, I plan on collecting these writings from around our state into a book that will celebrate how the citizens of Washington make poetry,” Marshall said.

Marshall, who will be introduced as the Laureate in Spokane on Feb. 4, earned a master of fine arts degree from Eastern Washington University and a Ph.D. from the University of Kansas. “Dare Say” was the 2002 winner of the University of Georgia’s Contemporary Poetry Series. “The Tangled Line” was a finalist for the Washington Book Award. Marshall also published a collection of his interviews with contemporary poets, “Range of the Possible” (Eastern Washington University Press, 2002), which was named to the New York City Public Library Poetry Book List for 2003, and an accompanying anthology of the interviewed poets’ work, “Range of Voices” (EWU Press, 2005). In 2005, he was awarded a Washington Artists Trust Fellowship. “Bugle” won the Washington State Book Award in 2015.