A Way to Make Better Catalysts for Meds, Industry and Materials 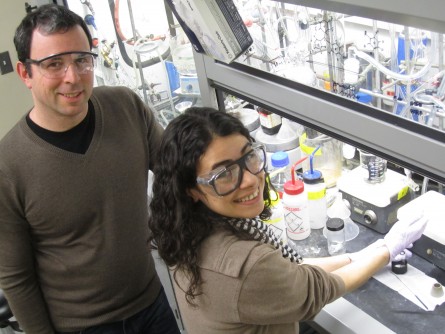 University of Utah chemists Matt Sigman and Anat Milo conducted a study in the journal Nature showing how vibrations in chemical bonds can be used to improve predictions of how chemicals will react – a method that can be used to design better catalysts used to hasten reactions used to make new materials, medicines and industrial products.

Newswise — SALT LAKE CITY, March 12, 2014 – University of Utah chemists discovered how vibrations in chemical bonds can be used to predict chemical reactions and thus design better catalysts to speed reactions that make medicines, industrial products and new materials. “The vibrations alone are not adequate, but combined with other classical techniques in physical organic chemistry, we are able to predict how reactions can occur,” says chemistry professor Matt Sigman, senior author of the study in the Thursday, March 13, issue of the journal Nature. “This should be applicable in a broad range of reactions. It streamlines the process of designing molecules for uses in new drugs, industrial chemicals and new materials.” Catalysts are chemicals that speed reactions between other chemicals without changing the catalyst itself. Postdoctoral researcher Anat Milo, the study’s first author, says use of the new method “can assist the design of reactions with fewer byproducts and much less waste, and the reactions would be more efficient. We are able to directly form the product we want.” She and Sigman conducted the study with Elizabeth Bess, a University of Utah Ph.D. student in chemistry. The research was funded by the National Science Foundation.

Shining Infrared Light on Bond Vibrations Chemical bonds tie atoms together within molecules. But the bonds are not static. They vibrate. Those vibrations reflect changes in distance between atoms in the molecule. For example, in water (H2O) the sole oxygen atom is bound to two hydrogen atoms, and the two bonds constantly change in length. “You can think of it like a spring,” Sigman says. “You put two different weights on the end of a spring, and the spring vibrates once you put energy into it” by pushing or pulling. In chemical reactions, the energy is added with heat, light or electricity.

We cannot see these vibrations with our eyes, but this bending and stretching of chemical bonds can be seen if infrared light is bounced off the molecules – a method called infrared spectroscopy. “This method is an extension of our eyes: wavelengths our eyes cannot detect, we use an instrument to detect,” Milo says. An infrared laser is aimed at a sample of a chemical – gas, liquid or solid – and certain wavelengths are absorbed. The wavelengths of the absorbed light reveal how the target molecule’s chemical bonds vibrate, which in turn tells about the types and positions of atoms in the molecule, the kinds and strength of bonds among atoms and the symmetry of the molecule, Milo says. “It’s an important structure identification technique to identify the kinds of bonds in a molecule,” Sigman says. Infrared spectroscopy is a well-established method with decades of predictable results. So it now can be simulated in computers and produce results that reflect real experiments. Sigman, Milo and Bess performed such simulations in their study using the university’s Center for High Performance Computing. “We took several molecules with known bond vibrations, and we used the relationship of these molecules to each other to build a model mathematically of the relative relationship between the bond vibrations in different molecules,” Sigman says. “We then built a mathematical relationship between these molecules that provides us with the ability to predict how other molecules will react based on their particular vibrations.” To show the method worked, the researchers performed three case studies, each a scenario with a different class of chemicals reacting with each other. They used computer simulations to predict the outcome of the reactions, and then experimentally verified them with real chemical reactions in the laboratory. One case study involved how chemicals known as bisphenols reacted with acetic anhydride. A small protein known as a peptide served as a catalyst to speed the reactions. The chemists simulated bond vibrations on different bisphenols to predict whether, when reacted with acetic anhydride and the catalyst, the resulting molecule would be “left-handed” or “right-handed” – a chemical property called chirality. Chirality is important because when we consume a food or medicine, it must have the correct “handedness” or chirality “to essentially handshake with the molecules in your body” and do what it is supposed to do, Milo says. For example, a right-handed drug molecule may work, while the left-handed version of the same medicine may not. “We managed to predict the handedness of the molecules accurately” 95 percent of the time by analyzing bond vibrations, Milo adds. The second case study was similar to the first, but involved predicting the “handedness” of chemicals made when a catalyst was used to convert a double carbon-carbon bond to a single carbon-carbon bond in a chemical named diarylalkene. In the third case study, the chemists used the method to predict whether a catalyst reacts with one side or the other side of a double carbon-carbon bond – two carbon atoms connected by two bonds instead of one – in what is called a Heck reaction, which is commonly used to make pharmaceuticals. “It works like a champ,” Sigman says.

Real-World Reactions How can the new method be used for practical purposes? “You would compute infrared vibrations for a specific class of molecules that you are interested in reacting,” Sigman says. “You then take a handful of those molecules and you run the reaction and get the results.” “Then you take the infrared vibrations you think are important and determine the relationship between those vibrations and the reaction results,” he adds. “The resulting mathematical equation allows you to make new predictions about how other chemicals in the class will react.” Sigman is collaborating with a major pharmaceutical company to use the new technique to improve chemical reactions for drug manufacturing. “Let’s say you want to synthesize a molecule,” he says. “You have various methods to try, but you don’t know which one will work. Our approach allows you to predict if the particular set of reagents – chemicals reacting with each other – will give the desired results.” Milo added that the new technique “is able to provide predictions that are not possible with classical chemistry methods.” For example, it allows chemists to simultaneously examine “steric” and electronic effects in reactions – something Sigman says now must be done separately. Steric effects are how the size and shape of atoms in a molecule affect how a chemical reaction works. Electronic effects involve how electrons in the atoms are shared within the molecule. Sigman says it is important that the new method can look at both kinds of effects at once “because most modern reactions involve both properties.”

Videos of bond vibrations may be downloaded from:https://vimeo.com/album/2764811

Before the embargo expires, the case-sensitive password is BenzoicVibe Caption for videos: Two videos show two kinds of bond vibrations in a molecule of benzoic acid. The first video shows how a double chemical bond between a carbon atom (gray) and oxygen atom (red) is stretched after the molecule has absorbed energy in the form of infrared light (upper right). The second video shows the bending of single bonds between atoms of carbon (gray), oxygen (red) and hydrogen (white) (bottom right). University of Utah chemists have discovered how such vibrations in chemical bonds can be used to predict chemical reactions and thus design better catalysts to aid reactions that make medicines, industrial products and new materials. Credit: Anat Milo, University of Utah.