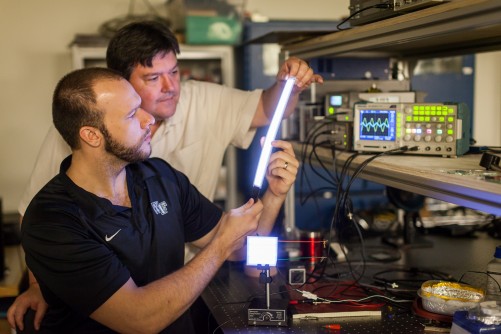 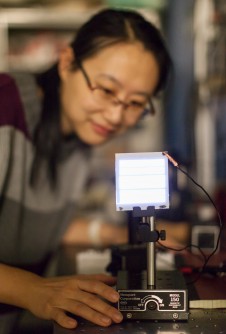 Newswise — Say goodbye to that annoying buzz created by overhead fluorescent light bulbs in your office. Scientists at Wake Forest University have developed a flicker-free, shatterproof alternative for large-scale lighting.

The lighting, based on field-induced polymer electroluminescent (FIPEL) technology, also gives off soft, white light – not the yellowish glint from fluorescents or bluish tinge from LEDs. “People often complain that fluorescent lights bother their eyes, and the hum from the fluorescent tubes irritates anyone sitting at a desk underneath them,” said David Carroll, the scientist leading the development of this technology at Wake Forest. “The new lights we have created can cure both of those problems and more.”

The team uses a nano-engineered polymer matrix to convert the charge into light. This allows the researchers to create an entirely new light bulb – overcoming one of the major barriers in using plastic lights in commercial buildings and homes. The research supporting the technology is described in a study appearing online in advance of publication in the peer-reviewed journal Organic Electronics.

The device is made of three layers of moldable white-emitting polymer blended with a small amount of nanomaterials that glow when stimulated to create bright and perfectly white light similar to the sunlight human eyes prefer. However, it can be made in any color and any shape – from 2x4-foot sheets to replace office lighting to a bulb with Edison sockets to fit household lamps and light fixtures.

This new lighting solution is at least twice as efficient as compact fluorescent (CFL) bulbs and on par with LEDs, but these bulbs won’t shatter and contaminate a home like CFLs or emit a bluish light like LED counterparts.

“If you wanted blue lights, discos would still be popular. You want lights that have a spectral content that is appealing to us inside of a building,” Carroll said. “You want a light that won’t shatter and create a hazmat situation while your children are around.”

Carroll’s group is the first to make a large-scale FIPEL that can replace current office lighting and is based on natural white light. Beyond office and home lighting, Carroll sees potential uses for large display lighting, from store marquees to signs on busses and subway cars.

FIPELs also are long-lasting; Carroll has one that has worked for about a decade.

Wake Forest is working with a company to manufacture the technology and plans to have it ready for consumers as early as next year.

Carroll is the Director of the Center for Nanotechnology and Molecular Materials at Wake Forest University. Center scientists have developed innovative technology including highly efficient plastic solar cells; Power Felt, a fabric that can use body heat to charge small electronics; and a combination solar-thermal heat pump. About Wake Forest UniversityWake Forest University combines the best traditions of a small liberal arts college with the resources of a large research university. Founded in 1834, the school is located in Winston-Salem, N.C. The University’s graduate school of arts and sciences, divinity school, and nationally ranked schools of law, medicine and business enrich our intellectual environment. Learn more about Wake Forest University at www.wfu.edu. 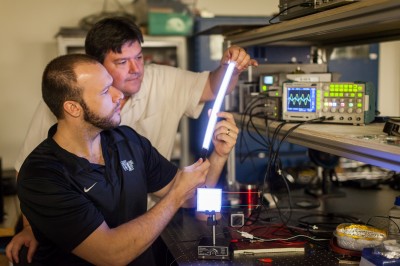 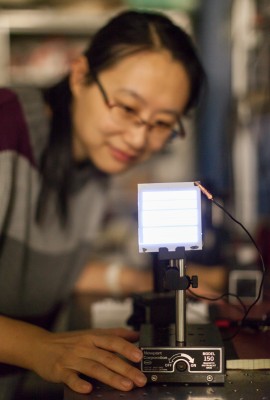