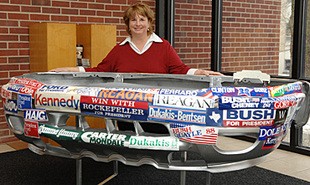 Newswise — Iowans see evidence of the presidential campaign literally all around them as the Jan. 3 caucuses draw near, even on car bumpers during their daily commutes. Patti Brown studies those bumper stickers more closely than most.

Her project provides a complete history and analysis of political bumpers stickers from United States presidential campaigns. It includes a political blog documenting her research and welcoming outside opinion at http://bumpertobumper.squarespace.com/, and a sculpture currently housed in the main entrance to ISU's Hamilton Hall.

Brown's creation features two Ford pickup bumpers, bolted together and covered with 65 presidential campaign stickers from Herbert Hoover (back when bumper stickers were metal plates) through the 2004 campaign. Although Brown includes none from current presidential candidates, she documents their latest creations and provides analysis in a section of the blog titled "a bumper crop of politicians' BS (bumper stickers!)."

Ironically, it wasn't a bumper sticker put on her car, but rather one from "Feminists for Life" that was removed from her bumper while she was in class one day, that gave her the idea for the project. She replaced that bumper sticker and also added one saying, "I Caucus for Darfur," and began to observe reaction.

"It's really interesting to see the reaction of people to bumper stickers you have on your car," Brown said. "And I thought, let's just apply this whole thing to examine the effectiveness of the political campaign bumper sticker. So I started taking notice of the different logos, color schemes, the signature fonts of the candidates who are running for the presidential nominations. And I was fascinated by them -- both from a visual communications standpoint, as well as an advertising effectiveness one."

"It's an incredibly powerful project because it's about personal communication in the public domain," said Newell. "We're so used to seeing ads that are placed by candidates, or by a candidate's interest group, and there's no personal stake in them. But when you put a bumper sticker on a car, you're really stepping up and making an announcement. And that's the same thing that makes the Iowa Caucus system so different from any other race -- you have to walk into a room and make your preferences known."

"A campaign bumper sticker shows that you, as a voter, have some active engagement in both the electoral process and also in your community," she said. "If one person has a campaign bumper sticker on their car and neighbors who haven't made up their minds see that, it serves as a symbol or sign to maybe think or consider that candidate because they know you're interested in that candidate. It could also have a boomerang effect if they don't like you."

Political bumpers stickers have come a long way from the first ones in the 1920s, which were made of cardboard or tin and added to a space on the bumpers of Model A Fords with string or wire. According to Brown's blog, the first modern, adhesive-backed bumper stickers were made in 1946 by Forest P. Gill, a silkscreen printer from Kansas City, who found use for a new sticky-backed paper and DayGlo ink that was left over from World War II. Brown interviewed Gill's son-in-law, Mark Gilman, who is the chairman of the board of Gill Studios, Inc., in Shawnee Mission, Kan. She learned that political bumper stickers account for 12 percent of the company's reported $50 million business during a major political year.

And yet the bumper sticker, as we've known it, is changing. President George W. Bush's 2004 campaign established a new trend in terms of size, shape and message. Some of the most popular Bush stickers mirrored the trendy European look " smaller and round with a one-letter brand, "W." The new look stickers were able to be stuck in car windows, and they took up less space on bumpers.

Among the current candidates, only Barack Obama seems to be capitalizing on this trend.

"From an advertising perspective, this is a real interesting development of logoing the president in that we became 'Brand W' with Bush," Brown said. "And it's fascinating to see what's happening with Obama's look. Obama's name with the 'O' " they've really played off of that as a circle that looks like a horizon. His logo, which was designed by a Chicago firm, is emblematic of a horizon, the start of a new day, or hope. So there's also sort of that real iconic branding."

And it is Brown's hope that her blog also will become the icon of all things related to political bumper stickers.