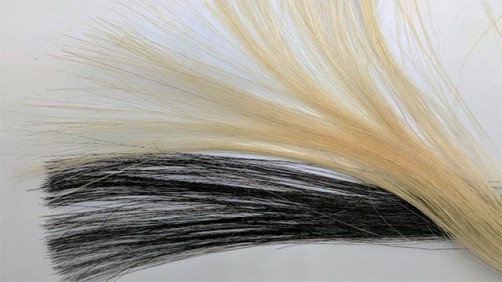 Hair before (blonde) and after (black) being dyed with the novel graphene-based hair dye.

Newswise — EVANSTON, Ill. --- It’s an issue that has plagued the beauty industry for more than a century: Dying hair too often can irreparably damage your silky strands.

Now a Northwestern University team has used materials science to solve this age-old problem. The team has leveraged super material graphene to develop a new hair dye that is non-toxic, non-damaging and lasts through many washes without fading. Graphene’s conductive nature also opens up new opportunities for hair, such as turning it into in situ electrodes or integrating it with wearable electronic devices.

The study was published online today (March 15) by the journal Chem. Jiaxing Huang, professor of materials science and engineering in Northwestern’s McCormick School of Engineering, led the research.

Dying hair might seem simple and ordinary, but it’s actually a sophisticated chemical process. Called the cuticle, the outermost layer of a hair is made of cells that overlap in a scale-like pattern. Commercial dyes work by using harsh chemicals, such as ammonia and bleach, to first pry open the cuticle scales to allow colorant molecules inside and then trigger a reaction inside the hair to produce more color. Not only does this process cause hair to become more fragile, some of the small molecules are also quite toxic.

Huang and his team bypassed harmful chemicals altogether by leveraging the natural geometry of graphene sheets. While current hair dyes use a cocktail of small molecules that work by chemically altering the hair, graphene sheets are soft and flexible, so they wrap around each hair for an even coat. Huang’s formula also incorporates edible, non-toxic polymer binders to ensure that the graphene sticks -- and lasts through at least 30 washes, which is the commercial requirement for permanent hair dye. An added bonus: graphene is anti-static, so it keeps winter-weather flyaways to a minimum.

“It’s similar to the difference between a wet paper towel and a tennis ball,” Huang explained, comparing the geometry of graphene to that of other black pigment particles, such as carbon black or iron oxide, which can only be used in temporary hair dyes. “The paper towel is going to wrap and stick much better. The ball-like particles are much more easily removed with shampoo.”

This geometry also contributes to why graphene is a safer alternative. Whereas small molecules can easily be inhaled or pass through the skin barrier, graphene is too big to enter the body. “Compared to those small molecules used in current hair dyes, graphene flakes are humongous,” said Huang, who is a member of Northwestern’s International Institute of Nanotechnology.

Ever since graphene -- the two-dimensional network of carbon atoms -- burst onto the science scene in 2004, the possibilities for the promising material have seemed nearly endless. With its ultra-strong and lightweight structure, graphene has potential for many applications in high-performance electronics, high-strength materials and energy devices. But development of those applications often require graphene materials to be as structurally perfect as possible in order to achieve extraordinary electrical, mechanical or thermal properties.

The most important graphene property for Huang’s hair dye, however, is simply its color: black. So Huang’s team used graphene oxide, an imperfect version of graphene that is a cheaper, more available oxidized derivative.

“Our hair dye solves a real-world problem without relying on very high-quality graphene, which is not easy to make,” Huang said. “I feel optimistic about this application.”

“People could apply this dye to make hair conductive on the surface,” Huang said. “It could then be integrated with wearable electronics or become a conductive probe. We are only limited by our imagination.”

So far, Huang has developed graphene-based hair dyes in multiple shades of brown and black. Next, he plans to experiment with more colors.