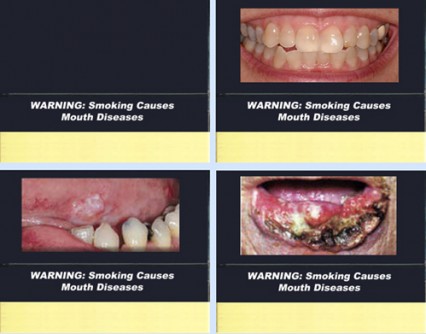 Researchers surveyed smokers intentions to quit after viewing four cigarette packages, including one with a warning label only and three with photographs of the negative consequences of smoking.

Newswise — Marketing researchers at the University of Arkansas, Villanova University and Marquette University surveyed more than 500 U.S. and Canadian smokers and found that the highly graphic images of the negative consequences of smoking have the greatest impact on smokers’ intentions to quit. The most graphic images, such as those showing severe mouth diseases, including disfigured, blackened and cancerous tissue, evoked fear about the consequences of smoking and thus influenced consumer intentions to quit.

“These results suggest that there appears to be little downside on intentions to quit from using extremely graphic pictorial depictions of the negative health outcomes due to smoking,” said Scot Burton, co-author of the study and marketing professor in the Sam M. Walton College of Business. “Our research shows that strong, negative graphic imagery – and fear evoked from such imagery – influences smokers’ intentions to quit. We also found this to be the case even though recall of the written messages on package labels was reduced by the more graphic images. In other words, smokers were influenced primarily by the images and not by the written message.”

Burton, Jeremy Kees and John Kozup, both marketing professors at the Villanova University, and Craig Andrews, marketing professor at Marquette University, developed the study to help officials at the U.S. Food and Drug Administration and the U.S. Department of Health and Human Services better understand what types of pictorial warnings are most effective and why they are effective. These agencies are responsible for implementing the 2009 Family Smoking Prevention and Tobacco Control Act, which requires graphic pictorial warning labels on cigarette packages by 2011. According to the law, “color graphics depicting the negative health consequences of smoking” must accompany cigarette package message statements, such as “Smoking Causes Mouth Diseases.”

Smoking causes many health problems, from emphysema and lung cancer to a variety of cardiovascular diseases. For this study, the researchers chose its effect on oral diseases, the most externally visible health consequence. They started by using images that ranged from highly graphic – vivid and powerful images of advanced mouth cancer – to less graphic – photographs of stained teeth caused by nicotine. In all, the graphic pictorial warnings were categorized as low, moderate or highly graphic.

In the primary study, 511 adult smokers, all members of a web-based research panel, were shown one of four different types of warning information on cigarette packages. These included one of the three photographs along with this written message: “WARNING: Smoking Causes Mouth Diseases.” The fourth package included the written message with no picture. The warning information covered approximately 40 percent of the entire package. Participants were asked questions concerning their opinions about the cigarette package and intentions to quit smoking.

“However, it is worth noting here that recall of the stated warning is likely to be influenced by multiple exposures to the warnings,” Kees said. “For instance, the graphic pictorial warnings may negatively affect recall initially because smokers are more ‘shocked’ by the warnings, but the stated message may be better remembered over time.”

The researchers found that the graphic images evoked fear, which in turn served as the primary underlying mechanism explaining the effects of the pictorial warnings. As depictions of the consequences of smoking were presented more graphically, smokers reported higher levels of fear, Burton said. Also, the findings were consistent across variations in the amount of time participants were exposed to the packages, which suggested that even a relatively limited exposure to the warning label might achieve the desired effect to motivate smokers to quit.

“We believe our study provides some valuable implications for health policy,” Burton said. “As public health officials and policy makers in the U.S. and around the world consider potential changes to warnings on cigarette packages, the addition of pictorial warnings, especially more graphic depictions of the consequences of smoking, to text-based messages appears beneficial. These data show that at least moderately graphic pictures should be used.”

The researchers’ study will be published in the fall issue of the Journal of Public Policy & Marketing. A copy of the study is available upon request.