Newswise — Oct. 11, 2017 - When you picture a horse, you may imagine it grazing contentedly in a grassy pasture. Grazing lets horses move around naturally outdoors and socialize with other horses. And grass is an easily available, nutritious feed that horses like eating. If you have the land, providing pasture for horses is less costly than buying hay.

Horses in the Upper Midwest usually graze on cool-season perennial grasses such as Kentucky bluegrass. Perennial grasses grow year after year without being replanted. Cool-season grasses provide good forage because they grow well in the spring and fall. Most also easily survive cold winters.

Unfortunately, when it gets hot many cool-season grasses go through a summer slump. This reduces both the amount and the quality of grass available for grazing. Perennial warm-season grasses do well in hot conditions, but they do not survive cold winters. As a result, they can’t be grazed in the Upper Midwest.

A new study by Krishona Martinson and colleagues at the University of Minnesota shows that warm-season annual grasses have good potential for use in horse pastures. “Annual grasses need to be replanted from seed each year, so they involve more work than perennial grasses, but they provide horse owners more summer grazing options,” noted Martinson. Martinson is Equine Extension Specialist at the University of Minnesota.

To study grazing potential, the researchers planted small plots of annual warm-season grasses. They wanted to see how much feed each grass type provided (the yield), their nutritive value, and which types the horses preferred.

The grasses included varieties of teff, sudangrass, sorghum sudangrass, and both Japanese and Siberian millet. Martinson said, “These grasses were chosen for their potential to yield well in the local climate and some had previously been grown for hay or grazed by cattle in the region.” Ryegrass, an annual cool-season grass, was also planted to serve as a comparison.

The horses were allowed to graze freely among all the grass types for four-hour periods. Grazing was allowed when the grasses were young and again after the grasses had a chance to regrow. Researchers carefully evaluated the grasses before and after grazing to find out what grasses the horses preferred. This sequence was repeated several times over the course of two summers. The researchers also did lab testing to analyze the grasses’ nutritive content.

Sudangrass and sorghum-sudangrass showed the greatest yields and regrew the most after grazing. Siberian millet was the lowest yielding grass. Horses most preferred the annual cool-season ryegrass, but among the warm-season grasses, they highly preferred teff and sudangrass.

All of the grasses were found to supply adequate nutrition for horses. Most also had high nitrate levels, which can be toxic to horses. “Nitrate levels should be closely monitored in warm-season grasses prior to grazing,” Martinson concluded.

This study also revealed a finding that can help some horses. Horses with some health conditions are usually kept from grazing on pasture, Martinson noted. This is because certain nutritional contents of the grass can trigger disease symptoms. The warm-season grasses proved to have less of the problematic contents than cool-season grasses. Happily, this means that warm-season annual forages may offer these horses the chance to graze in grassy pastures once again.

You can read more about this study in Agronomy Journal.  This research was partially funded by the Minnesota Agricultural Experiment Station. 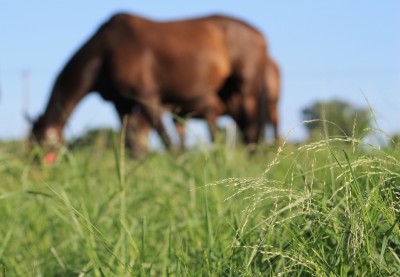 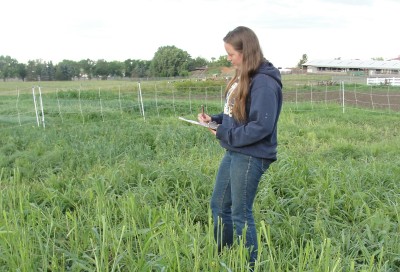