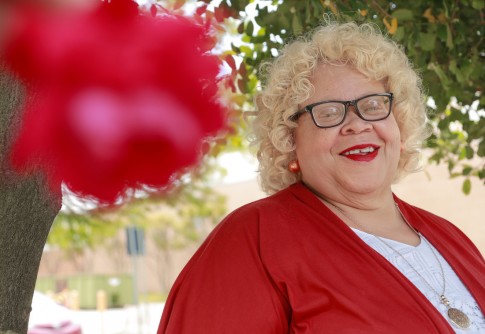 Vickie Austin graduates from the University of Arkansas at Little Rock after leaving high school at 15 after the birth of her first child.

Vickie Austin graduates from the University of Arkansas at Little Rock after leaving high school at 15 after the birth of her first child.

Newswise — At age 15, Vickie Austin left high school in Wynne, Arkansas, after becoming pregnant with her first child, though she always intended to finish her education.

Fast forward 41 years, and Austin, 61, a May 11 graduate of the University of Arkansas at Little Rock with a Bachelor of Arts degree in sociology and a minor in psychology and a strong desire to help others.

In the fall, she will begin a master’s degree program in rehabilitation counseling at Arkansas State University in Jonesboro, but Austin doesn’t intend to wait until she finishes her master’s degree to start helping others.

“As I work on my master’s degree, I want to do some things with my bachelor’s degree,” Austin said. “I really want to focus on volunteering. My concern is with children and older citizens, but my passion is helping the entire family.”

The mother of four, grandmother of 10, and great-grandmother of one developed a deep desire to help troubled families. She will also do some volunteering with people living in nursing homes after her younger sister spent three years living in a nursing home while she fought breast cancer.

“I talked to a lot of the other nursing home residents. One man told me that my sister was lucky to have siblings who visited her so often. He had brothers and sisters who lived within 35 miles, and they never visited him,” she said. “I’m concerned about helping people. I may not be the person who can make decisions for the people living in nursing homes, but I can still be there to listen.”

After raising her children on her own and babysitting many grandchildren, Austin’s return to education started in 2008. At age 50, she left the only town she ever lived in to move to Little Rock to enroll in the Little Rock School District’s Adult Education program, a move that served as a large inspiration to her family.

“Our mother decided it was time to put herself first and set out to accomplish everything that others told her she wouldn’t be able to because of being a teen mother, high school dropout, and being legally blind,” said La’Tasha Ursery, Austin’s daughter. “It wasn’t easy for her in the beginning. Once she got the swing of being in school, she got access to larger print items and anything that could help with her eyesight. She began to soar in the program and overcome barriers she had been denied.”

Once her oldest grandchild entered high school, Austin decided she wanted to finish her long-term goal of earning her GED certificate before her grandchild graduated.

Although she originally intended to just get her GED, Austin saw the value in pursuing higher education. She received her associate degree from University of Arkansas-Pulaski Technical College in 2014 before enrolling at UA Little Rock, where three of her four children went to college.

“A high school diploma was all I was looking for, and, Lord, look at me now,” Austin said. “There are a lot of people my age who think they are too old to go back and get a GED, and I had friends who told me I was too old to get my GED, but I made it.”

While at UA Little Rock, Austin said she was particularly inspired by Dr. David Briscoe, a professor of sociology who encouraged her to major in sociology.

“He inspired me to go into sociology,” she said. “I’m concerned about family matters, people who have been abused, and people affected by crime. Dr. Briscoe is the one who told me that if you look at everyone as a person who has feelings and needs, you learn how to communicate better.”