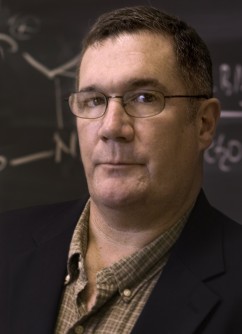 Gregory L. Hillhouse, professor in chemistry at the University of Chicago, died March 6, 2014, at the age of 59.

Newswise — Gregory L. Hillhouse, University of Chicago chemistry professor and a devoted mentor to students, died March 6 of cancer at his home in Chicago. He was 59.

“Greg was a pillar of excellence in our department and the University,” said Richard Jordan, chairman of the department of chemistry. “As a world class researcher, dedicated mentor and role model for his students, and engaged citizen of the University community, he epitomized what the University is all about. His research will inspire new lines of inquiry in inorganic chemistry for decades and the influence he had on his students will reverberate for generations. He was a great friend and superb colleague who will be sorely missed by many.”

John Boyer, dean of the College, said Hillhouse was “a profoundly dedicated teacher and mentor to thousands of College students over the course of his career. He also made many significant contributions to the improvement and enrichment of our curricular programs. He cared deeply about the success and the welfare of our students, in and out of the classroom."

Much of Hillhouse’s work focused on creating organometallic compounds to stabilize and isolate reactive intermediates, molecules that are proposed to exist briefly during a larger catalytic reaction process.

In 2001, Hillhouse used his synthetic creativity to dismiss the notion that it was impossible for late transition metals like nickel to form multiple bonds to elements like nitrogen. The result was a molecule that he affectionately referred to as “Double Nickel,” which possessed an indisputable nickel-nitrogen double bond.

The result was a major shift in the way chemists think about multiple bonding with late-transition metals. “Textbooks before 2001 said it was impossible to make those molecules, but Greg broke the rules,” said Daniel J. Mindiola, professor of chemistry, University of Pennsylvania, who coauthored the pivotal article with Hillhouse while a postdoctoral associate at Chicago.

Hillhouse also had a long-standing interest in the chemistry of nitrogen in transition metal compounds, which originated from his doctoral thesis. In 2013, he received the American Chemical Society’s National Award in Organometallic Chemistry. The compounds Hillhouse and his students created are models for otherwise unobservable intermediates in catalytic reactions. As such, they provide a window into a wide range of important processes, such as the regulation of the biological signaling molecule nitric oxide (one function of which is to control the dilation of blood vessels); the operation of automotive catalytic converters; the combustion of rocket fuel; and the production of aziridines, a compound used for time-released drug delivery.

In addition to changing textbooks, Hillhouse changed lives. “Greg was unusually effective in his mentorship of undergraduate and graduate students toward successful careers in science,” said fellow organometallic chemist T. Don Tilley, professor of chemistry at the University of California, Berkeley.

“His enthusiasm for chemistry inspired several of us to enter academia. He never considered his role as mentor to have an expiration date,” said his former student Milton “Mitch” Smith, PhD’90, professor of chemistry, Michigan State University.

“He was a fantastic mentor. He never set a dividing line between himself and the group members, and he really dedicated himself to his students,” said Mindiola. In addition to teaching techniques, “he was also meticulous about scientific writing, and that has been important in my career.”

Hillhouse also mentored Jonas Peters, BS’93, as an undergraduate. A former Marshall Scholar at the University of Nottingham, Peters now is the Bren Professor of Chemistry at the California Institute of Technology.

Former students honored Hillhouse with two awards, the 1997 Quantrell Award for Excellence in Undergraduate Teaching and the 2011 Norman Maclean Faculty Award, which recognizes extraordinary contributions to teaching and to the student experience of life within the University community.

Just as he was passionate about chemistry and students, Hillhouse was passionate about life in general. Chicago students knew him as a fiercely competitive intramural athlete who was both an excellent basketball player and the leader of many champion summer softball teams. He even played pickup basketball with President Barack Obama, but “we didn’t know who he was at the time; he was just one of the guys,” said veteran teammate Surrey Walton, an economist at the University of Illinois at Chicago whose family called Hillhouse “Uncle Greg.”

He carried his creativity, enthusiasm, and generosity of spirit into his avocations of painting, cooking, and collecting fine wine. An accomplished chef who enjoyed entertaining his friends, he spent every Saturday night through much of the 1990s cooking classic, butter-laden French meals for residents at Open Hand Chicago, a charity now called Heartland Alliance-Vital Bridges, according to Walton. Hillhouse even found a way to unite his passions for sports and rich French cooking. The name of his two-time champion intramural basketball team? “Old World Fat.”

Hillhouse is survived by a cousin, Denise Burckhalter and her husband Charles. He was preceded in death by his mother, Christine B. Kinsler, and his stepfather, Joseph D. Kinsler.