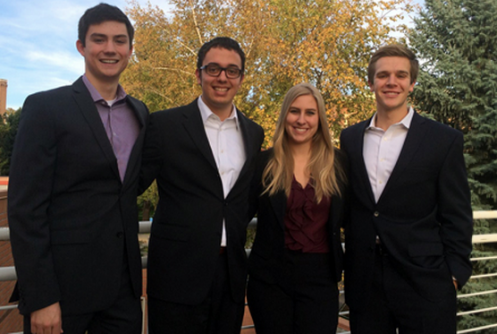 Newswise — SPOKANE, Washington – A team of four Gonzaga University accounting students is thanking Zag Nation this Thanksgiving. An eleventh-hour burst of support from Gonzaga and its friends last week has powered the team to the finals of the prestigious PricewaterhouseCoopers National Accounting Case Competition in New York City in January.

After winning the local site competition, Gonzaga and the other teams had two days to post a video to the PWC Facebook page. The Gonzaga team won by receiving the most votes for its video by midnight (EST) Friday, Nov. 21.

At one point last week, the Zags trailed by more than 800 votes before Gonzaga students, faculty, staff, alumni, and friends – including local TV stations, the City of Spokane and Seattle Seahawks’ Coach Pete Carroll – rallied to give the team a victory by a margin of more than 500 points.

“This puts Gonzaga in very elite company to be a PWC Case finalist because there are only five,” said Gary J. Weber, Ph.D., director of Gonzaga’s Master of Accountancy Program and coordinator of accounting. “This is particularly impressive because this is the first year that we have participated in this competition.”

To get to the finals, the Gonzaga team competed against nearly 5,000 other students from 95 colleges and universities nationwide.

Gonzaga was among 90 schools to host the competition.

The students expressed their thanks in a message to the Gonzaga community this week.

“Together with you, we leveraged our combined Zag network—a powerful thing that should never be underestimated. Gonzaga was the smallest school in this competition and we were able to win against institutions several times larger. That is due in no small part to your help all week long,” the students noted. “Our team cannot thank you enough for rallying around us last week in true Zag fashion. We as a team never quit because we had a strong belief in the Gonzaga community. You did not let us down, Zag Nation! We will do our very best to make you proud in New York City!”

“I am often asked what is special about Gonzaga. Examples like this are often the essence of my answer. In this case a group of our students excelled in a competition against other schools, qualifying as a national semi-finalist in a prestigious competition. Then the entire GU community, including its alumni and its friends, came together to send them on to the finals. Stories like this demonstrate what makes Gonzaga such a special place,” Anderson noted.