Growing Food in the Dark 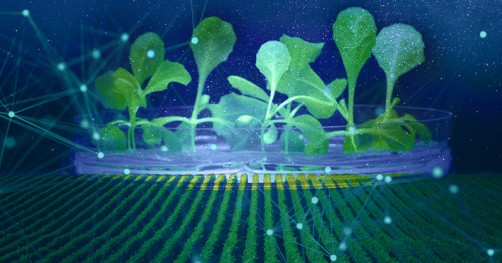 Researchers from University of Delaware and the University of California Riverside are reimagining ways to grow food, leveraging electrolyzer technology and acetate to grow crops without photosynthesis. 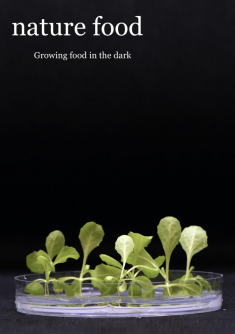 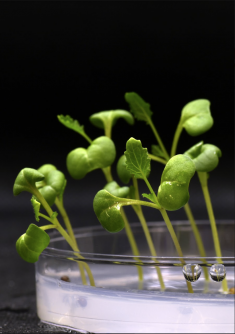 Researchers from University of Delaware and the University of California Riverside are reimagining ways to grow food, leveraging electrolyzer technology and acetate to grow crops without photosynthesis.

Newswise — Photosynthesis is the process that enables plants to take sunlight and carbon dioxide and convert it into chemical energy to grow. Crop plants, however, are only about 1% efficient at doing this, requiring large swaths of land to meet food demand.

As our global population grows, humanity is increasingly pressed to produce more food within the same land area because — let’s face it — the Earth isn’t getting any bigger.

But what if there was a way to break these terrestrial ties?

Researchers at the University of Delaware and the University of California Riverside are working on technology to produce food without sunlight through artificial photosynthesis. The collaborative effort, reported June 23 in Nature Food, could be the one small step needed to enable a giant leap in reimagining how food can be produced on Earth, and maybe even in space.

“If we get rid of the need for sunlight, then we can grow multiple layers of crops at once, similar to the way mushrooms are grown, and create a sort of food factory,” said Feng Jiao, the Robert K. Grasselli, Ph.D. Professor of Chemical and Biomolecular Engineering at UD.

In the work, the researchers used a two-step carbon dioxide electrolyzer system to produce a chemical compound called acetate. Electrolyzers are devices that use electricity to convert raw materials like carbon dioxide into useful molecules and products. Acetate is a common ingredient found in household items, such as vinegar, cosmetics and hair care products. But here, acetate was used to cultivate yeast, mushroom-producing fungus and photosynthetic green algae in the dark, without photosynthesis.

The UD-developed electrolyzer efficiently converted 57% of the carbon molecules found in carbon dioxide to acetate using a copper catalyst, creating a highly concentrated acetate stream that could be used as plant food. The UCR researchers evaluated nine crop plants (lettuce, rice, cowpea, green pea, canola, tomato, pepper, tobacco and Arabidopsis, a member of the mustard family that includes cabbage and radishes) and found the plants were able to take up carbon from this externally supplied acetate through major metabolic pathways.

Further, the researchers found that, when coupled with an external solar cell to power the electrolyzer, the approach required just one-fourth the energy to grow the same amount of food created by sunlight and natural photosynthesis. For example, the algae grew about four times more energy efficiently with this method compared to photosynthesis, and yeast was able to be cultivated about 18 times more energy efficiently than typical methods involving sugar.

The collaborative research project grew out of a chance meeting in fall 2018 when Jiao was giving a talk at the University of California Riverside about his use of electrocatalysis to convert carbon dioxide to other chemicals and products.

In the audience, Jinkerson, UCR assistant professor of chemical and environmental engineering and of botany and plant sciences, perked up when Jiao mentioned that one of the end products he could make using this method was acetate. Jinkerson approached Jiao after the presentation.

“Robert was looking for technology to grow food without photosynthesis,” Jiao said.

The two research groups quickly teamed up to see if the acetate created through Jiao’s electrochemical systems could serve as both a carbon and energy source so that plants could grow without the benefit of photosynthesis from direct sunlight.

According to Sean Overa, a fourth-year chemical engineering doctoral student at UD and a co-first author on the paper, the tricky part of the electrocatalysis side of the work was figuring out the right concentration of acetate to use.

“We found out pretty quickly that typical products derived from carbon dioxide electrolyzers have way too much salt content to support food-producing organisms, such as algae, fungus or plants,” he said.

At UCR, Jinkerson’s research team tested the acetate on photosynthetic algae to see whether it would support the growth of food-producing plants in the dark. The team’s results showed the method produced algae at yields comparable to those found with typical growth mediums.

The method was about four times more energy efficient than natural photosynthesis at converting carbon dioxide to plant biomass.

“We were able to grow algae completely in the dark,” said Overa. Meanwhile, lettuce showed the best incorporation of the acetate out of all the food crops.

The researchers also studied where the acetate went inside the plant. The results showed that all of the plants tested were able to incorporate acetate, and they were fairly willing to digest and use the carbon molecules. In some plants, the acetate showed up in the plant’s amino acids. In others, it was found in sugars the plant used as energy for growth.

“It showed us that there are digestive pathways that could be unlocked inside of many plant species that could allow them eventually to completely grow on acetate,” said Overa.

Future work could include exploring ways to bioengineer plants to grow solely on acetate and further optimizing the electrolyzer system’s ability to produce increasingly concentrated acetate from carbon dioxide.

The researchers said the approach could potentially lead to more efficient food production. For instance, by liberating agriculture from complete dependence on the sun, artificial photosynthesis opens the door to countless possibilities for growing food under the increasingly difficult conditions imposed by anthropogenic climate change. Drought, floods and reduced land availability would be less of a threat to global food security if crops for humans and animals grew in less resource-intensive, controlled environments.

“Using solar energy to power our process could allow for more food or animal feed to be produced on a given area of land. Widespread adoption of this type of approach could help to meet the rising demand for food without expansion of agricultural lands,” said Jinkerson.

Overa agreed. “For countries that are prone to famine or maybe don't have as much arable land, the technology could lower the burden of food growth if we can get the plants to grow wholly on acetate,” he said.

Crops could also be grown in cities and other areas currently unsuitable for agriculture, and even provide food for future space explorers, the researchers said.

Other co-authors on the paper from UCR include co-first authors Elizabeth Hann and Marcus Harland-Dunaway, as well as Andres Narvaez, Dang Le and Martha Orozco-Cárdenas.