Lawrence Hamilton, professor of sociology at the University of New Hampshire, discusses his most recent research about environmental views of Gulf Coast residents who were most affected by the Deepwater Horizon disaster and oil spill. 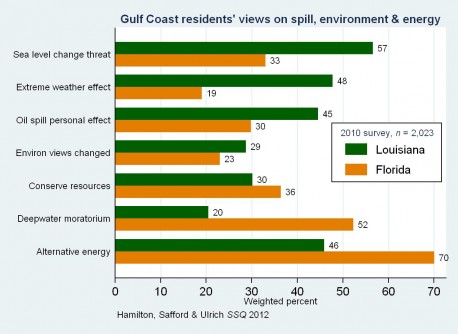 Newswise — DURHAM, N.H. -- University of New Hampshire researchers have found that residents of Louisiana and Florida most acutely and directly affected by the BP Deepwater Horizon disaster -- the largest marine oil spill in U.S. history -- said they have changed their views on other environmental issues as a result of the spill.

"If disasters teach any lessons, then experience with the Gulf oil spill might be expected to alter opinions about the need for environmental protection. About one-fourth of our respondents said that as a result of the spill, their views on other environmental issues such as global warming or protecting wildlife had changed," said Lawrence Hamilton, professor of sociology at the University of New Hampshire.

“This proportion rose to 35 percent among those most affected economically by the spill. People reporting changed views also expressed greater concern about sea level rise due to climate change, more support for a moratorium on deepwater drilling, and were more likely to favor alternative energy rather than increased oil exploration,” Hamilton said.

Hamilton and his colleagues Thomas Safford, assistant professor of sociology, and Jessica Ulrich, a doctoral student in sociology, present their findings in the journal Social Science Quarterly in the article “In the Wake of the Spill: Environmental Views Along the Gulf Coast.”

The research results are based on surveys of 2,023 residents of the Gulf Coast conducted in the aftermath of the explosion on the BP Deepwater Horizon oil rig in April 2010. Telephone interviews were conducted with 1,017 residents of Louisiana’s Plaquemines and Terrebonne parishes and 1,006 residents of Florida’s Bay, Gulf, and Franklin coun-ties. Most of the interviews took place between the successful capping of the well in July 2010, and the completion of a final relief well in September 2010. All told, an estimated 4.4 million barrels of oil escaped from the well, some of it washing ashore on wetlands, barrier islands, and beaches of Louisiana, Mississippi, Alabama, and the Florida Panhandle.

Louisiana residents more often reported that the spill had major effects on them and their families. They also saw more serious consequences from extreme weather, and greater threats from sea level rise caused by climate change. However, they were less likely than Florida residents to favor a moratorium on deepwater drilling, increased use of alternative energy, or conservation of natural resources.

“The deepwater moratorium was meant to reduce the risk of further oil spills in the immediate future. Alternative energy development or conservation might have longer-term benefits, reducing the risk both of oil spills and increased flooding. Thus, we see a contrast between Louisiana residents’ greater exposure to environment-related disasters and weaker support for these environmental protections,” Hamilton said.

While Louisiana has welcomed oil and today benefits to the tune of roughly $65 billion a year, Florida earns a similar amount from tourism. Floridians have actively opposed offshore oil drilling, which is currently banned in state waters.

“The pattern of responses from coastal Louisiana, where many more people reported effects from the spill, extreme weather, or threats from climate-related sea-level rise—but fewer supported a deepwater moratorium, alternative energy, or resource conservation—reflects socioeconomic development around oil and gas. Specialization has been channeled partly by physical characteristics of the Louisiana coastline itself,” Hamilton said.

“Florida’s Gulf Coast geography supported development in different directions, so today there are fewer oil-related jobs but much amenity development also at risk from spills and climate effects. From a perspective shaped by this different coastal landscape, steps that might reduce such risks while slowing oil and gas development appeared more attractive,” he said.

VIDEOLawrence Hamilton, professor of sociology at the University of New Hampshire, discusses his most recent research about environmental views of Gulf Coast residents who were most affected by the Deepwater Horizon disaster and oil spill.http://www.youtube.com/watch?v=xkcTsWJt9c4Credit: UNH Video Services

A map of oil and gas platforms on the Gulf Coast, the site of the Deepwater Horizon disaster, the oiled shoreline resulting from the oil spill, and the five parishes/counties that were surveyed by UNH researchers.http://www.unh.edu/news/img/lhamilton_oilgasplatforms.jpgCredit: Lawrence Hamilton