Newswise — Offshore ledges, sinkholes or springs collectively known as carbonate karst “blue holes” are ecological hotspots that have evaded mainstream scientific research because they are too deep (425 feet or more) and exceed the depth limits of technical scuba diving. Some also have very small openings (less than 6 feet wide), preventing efficient access by submersibles, which also are prohibitive due to their tendency to re-suspend the fine grained sediments, creating a blinding, disorienting environment. As result, the exploration of many of these sites has been pioneered by a very limited number of technical diving enthusiasts or sports fishermen who have closely-guarded their locations for decades.

Researchers from Florida Atlantic University’s Harbor Branch Oceanographic Institute are among a team of scientists from Mote Marine Laboratory and Aquarium, Georgia Tech (Georgia Institute of Technology) and the United States Geological Survey (USGS) who are getting a unique glimpse into these blue holes thanks to gutsy divers and a maneuverable 500-pound autonomous, benthic lander designed especially to descend deep into blue holes.

Supported by the U.S. National Oceanic and Atmospheric Administration (NOAA) Ocean Exploration and Research, the research team recently completed an expedition into the Green Banana Blue Hole (Green Banana) in the Gulf of Mexico Outer Continental Shelf, discovering that “ocean blue holes are not created equally.” Together with hand-picked, elite deep rebreather scuba divers, the research team helped to unravel the structure and behavior of these marine environments by examining geochemistry, hydrodynamics, and biology using state-of-the-art technologies. The mission reinforces the links between the oceans and coasts via the submarine aquifer, improves environmental stewardship by informing marine ecological protection initiatives, and provides fundamental new insights into chemical and biological processes that may mimic other extreme, otherwise inhospitable environments in the Universe.

“There is a fundamental gap in our scientific understanding of deep blue holes because these cave-like sinkholes are extremely inaccessible,” said Jordon Beckler, Ph.D., who participated in the mission and is an assistant research professor at FAU’s Harbor Branch and a fellow of FAU’s Institute for Sensing and Embedded Networks Systems Engineering (I-SENSE). “As we recently discovered, these environments harbor complex ecosystems that are clearly biodiversity hotspots. To conserve, protect and manage these ecosystems, it is necessary to gain a thorough knowledge of blue hole locations, physical structure, and any potential aquifer connectivity, and in turn, how these characteristics affect their biogeochemical properties and ecological diversity.

The research team’s recent exploration of the Green Banana revealed some similarities with the “Amberjack Hole,” (Amberjack) explored by the researchers twice since May 2019. They are both chock full of  “life” at the surface, as exhibited by sharks, fishes, crabs, corals and sponges. However, this life gradually decreases with descent downwards from the rim as light and dissolved oxygen decrease. The sediments of both blue holes physically funnel organic material to the base of the blue hole, resulting in a sediment “debris” pile highly enriched in organic carbon and inorganic nitrogen and phosphorous nutrients — the building blocks for life — as well as hydrogen sulfide, an inevitable byproduct of microbial respiration generated in organic-rich marine environments.

Stark differences between the two holes presented themselves via the keen senses of the divers and several advanced technologies. Amberjack has a seasonally stable, stratified, sulfidic bottom water layer with a similarly stable but unique microbial community. These findings were recently submitted as part of a publication led by collaborating scientist Nastassia Patin, Ph.D., formerly of Georgia Tech and now a postdoctoral associate at the Cooperative Institute for Marine and Atmospheric Studies, University of Miami/NOAA and coauthored by Beckler and collaborators. The researchers were not surprised by these findings because of the measured high input fluxes of sulfide and nutrients coming from the sediments. This latest finding was based on both benthic lander and sediment core measurements.

In contrast, advanced electrochemical analyses within the Green Banana showed that potentially toxic hydrogen sulfide was only detected periodically within the water column. This finding suggests that the Green Banana water column, unlike the Amberjack, is somehow flushed of the sediment-derived hydrogen sulfide and nutrients. In fact, the divers reported feeling vertical flows, and video evidence arguably shows the upward flow of particulate material. Overall, this evidence suggests that the Green Banana is subject to periodic flushing, either via tidal, groundwater flow, or even induced by biological migration.

“One of the most interesting findings is that the Green Banana bottom-water benthic chlorophyll signal is relatively low during the day, but increases ten-fold within 30 minutes of sunset only to decrease again right after sunrise,” said Beckler. “This somewhat counterintuitive result suggests the phytoplankton may rise to the surface to obtain light during the day, but when light is no longer available at night, they instead concentrate near the sediment surface at night to obtain nutrients fluxing from sediments. For all we know, this mass migration may actually even be a driving force for the apparent water column mixing.”

These results may have important implications. It is known that the Green Banana sediments are still pumping out nutrients at similar rates as in the Amberjack, but the nutrients are detected to a much lesser extent in the Green Banana water column, which means the nutrients may be escaping the blue hole and fertilizing the Gulf of Mexico continental shelf. These results also may have important consequences for phytoplankton in the Gulf of Mexico, including blooms of the Florida Red-tide species Karenia brevis, which have been previously detected in bottom-water layers in the vicinity of these blue holes prior to emerging nearshore.

For the Green Banana mission, the team deployed the divers and the autonomous benthic lander originally developed by Martial Taillefert, Ph.D., Georgia Tech and later adapted by FAU’s Harbor Branch for use in surveying blue holes. The lander was equipped with new sensors and made more maneuverable for deployment by divers, as opposed to only by a crane on a ship in the previous generation. Novel to this expedition, the lander was outfitted with a new oceanographic instrument. Developed by Analytical Instrument Systems, Inc., this in situ electrochemical analyzer X (ISEA X) enabled measurements of dissolved oxygen, hydrogen sulfide, other sulfur-based redox chemical analytes, and dissolved metals every few seconds. This device enables previously-unforeseen insights into microbial respiratory processes employed by organisms in these extreme environments where there is low oxygen.

Tech divers descended into the base of the Green Banana reaching depths of approximately 420 feet. They carefully maneuvered the lander into place onto the debris pile for optimal positioning so that it would autonomously make sediment measurements and collect benthic water samples for laboratory testing. Divers also collected sediment cores and were equipped with Go-Pro cameras to record macrofauna surveys and general logistics. The work was performed using Mote Marine Laboratory’s research vessels: a 37-foot Yellowfin yacht used for rapid transit to the study site to support diving operations and the deployment of small equipment, while the 46-foot Newton was used to deploy the benthic lander.

“Diving into the Green Banana Blue Hole was quite challenging due to poor visibility, having to deal with fishing line entanglement as well as addressing other technical issues; however, this is precisely why we continuously train and practice different scenarios to prepare us for situations just like this one,” said Marty Watson, who led the team of divers who were responsible for placing the benthic lander into the Green Banana. “The project was a huge success and I’m extremely proud to volunteer my expertise as a deep diver working for research and exploration teams supporting an amazing group of scientists who are all focused on one common goal — making our world a better place.”

Between all project partners, a vast number of measurements will eventually be made over the next several months on collected water column and sediment samples, including biological surveys via video and acoustics, nutrients, redox chemical analytes, radiological isotopes that may indicate flow, anions, dissolved organic carbon, carbonate system chemistry, chlorophyll a, and microbial community taxonomic and functional gene composition. In addition, the FAU team has the challenging task of analyzing all of the data collected by the autonomous instrumentation on the benthic lander. Caption: Matt Quinan prepares the benthic lander as scuba diver Drew Dye prepares to guide it down into the “Green Banana” Blue Hole in the Gulf of Mexico. 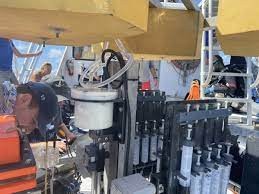 Caption: The 500-pound autonomous benthic lander was equipped with new sensors and made more maneuverable for deployment by divers, as opposed to only by a crane on a ship in the previous generation. 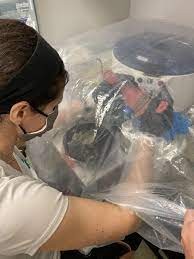 Caption: Lynn Wilking analyzes sediments from the “Green Banana” Blue Hole in a laboratory onboard the research vessel.