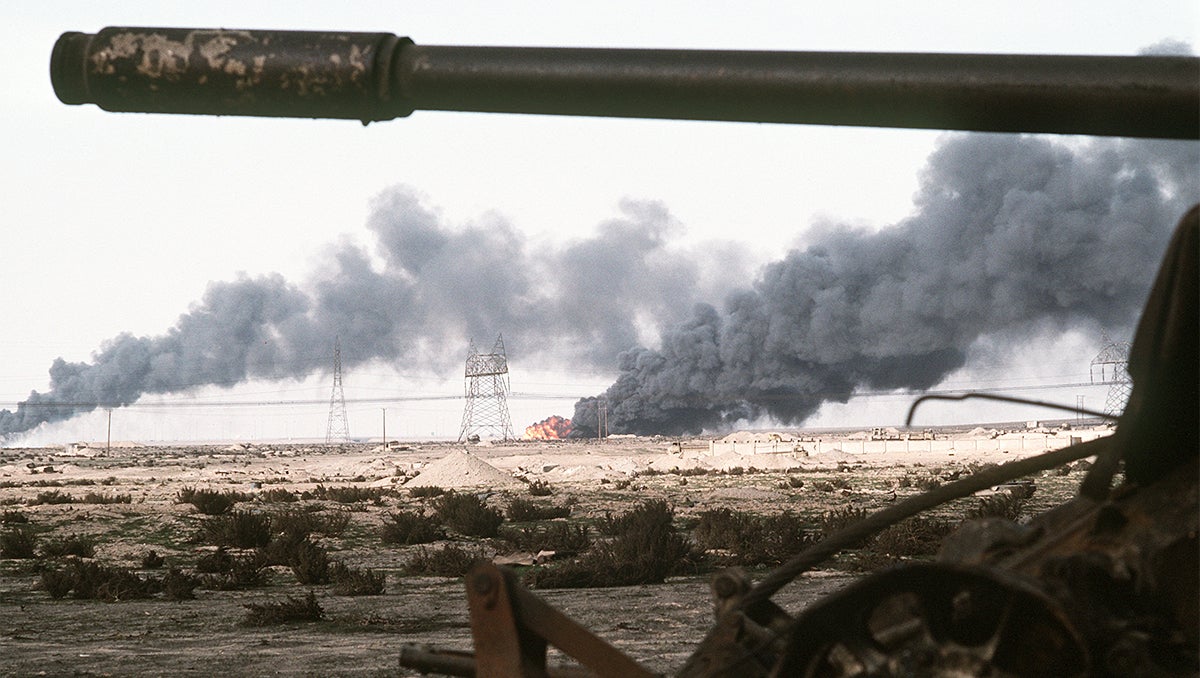 A Kuwaiti oil field set afire by retreating Iraqi troops burns in the distance beyond an abandoned Iraqi T-55A tank following the Persian Gulf War in 1991.

Newswise — WASHINGTON – A brain imaging study of veterans with Gulf War illness (GWI) and patients with chronic fatigue syndrome (CFS) (sometimes called myalgic encephalomyelitis), has shown that the two illnesses produce distinctly different, abnormal patterns of brain activity after moderate exercise.  The result of the Georgetown University Medical Center study suggests that GWI and CFS are distinct illnesses, an outcome that could affect the treatment of veterans with Gulf War illness.

The findings were published today in the journal Brain Communications.

While it is estimated that CFS affects 0.2-2% of the U.S. population, GWI is a multi-symptom illness that affects about 25% to 30% of the approximately 700,000 military personnel who participated in the 1990-1991 Persian Gulf War.

The two illnesses share many symptoms, including cognitive and memory problems (often described as “brain fog”), pain, and fatigue following mild to moderate exercise.  Some medical institutions, including the U.S. Department of Veterans Affairs (the VA), list CFS as a symptom of GWI (called chronic multisymptom illness associated with service in the Gulf War by the VA).

“Our results strongly suggest that GWI and CFS represent two distinct disorders of the brain and therefore CFS is not a symptom of GWI,” says Stuart Washington, PhD, a post-doctoral fellow and first author on the study. “Combining of two different disorders could lead to improper treatment of both.”  Washington works in the laboratory of James Baraniuk, MD, professor of medicine at Georgetown.

In the study, functional magnetic resonance imaging (fMRI) revealed that the brains of veterans with GWI and those of patients with CFS behaved differently when performing the same memory task after moderate exercise.  Veterans with GWI showed a decrease in brain activity in the periaqueductal gray, a pain processing region within the brainstem, and in the cerebellum, a part of the brain responsible for fine motor control, cognition, pain, and emotion.

On the other hand, patients with CFS showed increased activity in the periaqueductal gray and in parts of the cerebral cortex related to maintaining vigilance and attention.  In healthy subjects, these areas of the brain had no changes at all.

A previous study published by this same research group also suggested that the two illnesses are distinct. It showed that exercise causes different changes to the molecular makeup of cerebrospinal fluid in veterans with GWI and patients with CFS.

“Now that CFS and GWI have been shown to affect different regions of the brain, these regions can be more closely examined using neuroimaging and other techniques to further our understanding of the similarities and differences between the two illnesses,” says Baraniuk. “Once this new information is adopted broadly, diagnoses and treatments for both disorders should improve.”

The authors wish to thank the veterans and patients who participated in this research.

The authors report no competing interests.

About Georgetown University Medical Center As a top academic health and science center, Georgetown University Medical Center  provides, in a synergistic fashion, excellence in education — training physicians, nurses and other health care professionals, as well as biomedical scientists — and cutting-edge interdisciplinary research collaboration, enhancing our basic science and translational biomedical research capacity in order to improve human health. Patient care and clinical research is conducted with our clinical partner, MedStar Health. GUMC’s mission is carried out with a strong emphasis on social justice and a dedication to the Catholic, Jesuit principle of cura personalis -- or “care of the whole person.” GUMC comprises the School of Medicine, the School of Nursing & Health Studies, Biomedical Graduate Education, and Georgetown Lombardi Comprehensive Cancer Center. Designated by the Carnegie Foundation as a "very high research activity university,” Georgetown is home to a Clinical and Translational Science Award from the National Institutes of Health, and a Comprehensive Cancer Center designation from the National Cancer Institute. Connect with GUMC on Facebook (Facebook.com/GUMCUpdate) and on Twitter (@gumedcenter).