4-Jun-2012 12:00 PM EDT, by Perelman School of Medicine at the University of Pennsylvania contact patient services 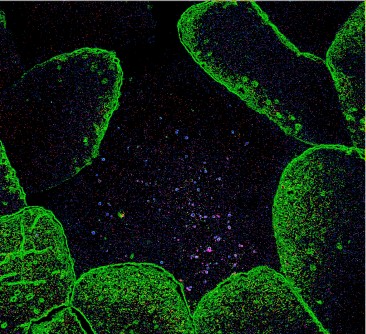 PHILADELPHIA – The healthy human intestine is colonized with over 100 trillion beneficial, or commensal, bacteria of many different species. In healthy people, these bacteria are limited to the intestinal tissues and have a number of helpful properties, including aiding in the digestion of food and promoting a healthy immune system.

However, when it comes to commensal bacteria, location is key. While commensal bacteria in the intestine provide positive effects, several chronic human diseases, including HIV/AIDS, inflammatory bowel disease, viral hepatitis, and obesity are associated with the spread of these intestinal commensal bacteria to the blood stream and other peripheral tissues, which can cause chronic inflammation. ‘Good bugs’ that promote normal health can ‘turn bad’ if found in the wrong location.

In earlier work, researchers from the Perelman School of Medicine at the University of Pennsylvania found that barrier surfaces -- the skin, gut, lung – are guarded by immune cells and limit the inner body’s exposure to viruses, bacteria, and parasites, as well as allergens and pollutants. But, how immune cells play a role in limiting the location of commensal bacteria to intestinal and other barrier sites remains unclear.

Now, David Artis, PhD, associate professor of Microbiology, and Gregory F. Sonnenberg, PhD, a postdoctoral researcher in the Artis lab, have identified that immune cells, called innate lymphoid cells, are resident in the intestinal tissues of healthy humans, mice, and non-human primates, and are critical in limiting the location of commensal bacteria. If the innate lymphoid cells are depleted in mice, commensal bacteria move to peripheral tissues and promote inflammation. The research appears this week in Science.

Supporting experiments in animal models, Alcaligenes-specific immune responses were associated with patients with Crohn's disease or progressive hepatitis C virus infection, two debilitating human diseases linked to the spread of commensal bacteria to systemic tissues. “The identification of systemic Alcaligenes-specific immune responses in these patient populations suggests that, coupled with other groups of bacteria, the spread of Alcaligenes to tissues outside the intestine may be contributing to chronic inflammation and disease progression,” suggests Sonnenberg.

Innate immune cells may become impaired in chronic human diseases, resulting in the spread of Alcaligenes bacteria and pathologic inflammation, which may represent a novel pathway to target in human disease, say the investigators.

“Although it’s still early days for this line of research, these findings suggest that targeting innate lymphoid cell responses or directly targeting specific groups of commensal bacteria may be useful in the treatment of some chronic inflammatory diseases,” adds Artis.

The Perelman School of Medicine is currently ranked #2 in U.S. News & World Report's survey of research-oriented medical schools. The School is consistently among the nation's top recipients of funding from the National Institutes of Health, with $479.3 million awarded in the 2011 fiscal year.

Penn Medicine is committed to improving lives and health through a variety of community-based programs and activities. In fiscal year 2011, Penn Medicine provided $854 million to benefit our community.