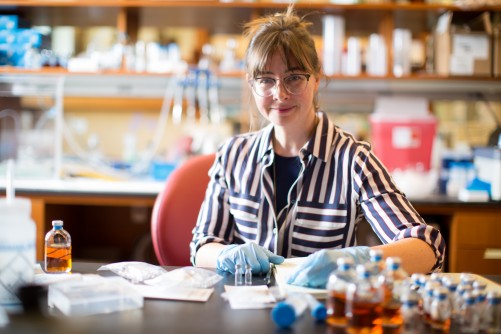 Newswise — November 1, 2017—(Bronx, NY)—Albert Einstein College of Medicine researchers report that the composition of people’s gut bacteria may explain why some of them suffer life-threatening reactions after taking a key drug for treating metastatic colorectal cancer. The findings, described online today in npj Biofilms and Microbiomes, a Nature research journal, could help predict which patients will suffer side effects and prevent complications in susceptible patients.

“We’ve known for some time that people’s genetic makeup can affect how they respond to a medication,” says study leader Libusha Kelly, Ph.D., assistant professor of systems & computational biology and of microbiology & immunology at Einstein. “Now, it’s becoming clear that variations in one’s gut microbiome—the population of bacteria and other microbes that live in the digestive tract—can also influence the effects of treatment.”

Irinotecan is one of three first-line chemotherapy drugs used to treat colorectal cancer that has spread, or metastasized, to other parts of the body. However, up to 40 percent of patients who receive irinotecan experience severe diarrhea that requires hospitalization and can lead to death. “As you can imagine, such patients are already quite ill, so giving them a treatment that causes intestinal problems can be very dangerous,” says Dr. Kelly. “At the same time, irinotecan is an important weapon against this type of cancer.”

Irinotecan is administered intravenously in an inactive form. Liver enzymes metabolize the drug into its active, toxic form that kills cancer cells. Later, other liver enzymes convert the drug back into its inactive form, which enters the intestine via bile for elimination. But some people harbor digestive-tract bacteria that use part of inactivated irinotecan as a food source by digesting the drug with enzymes called beta-glucuronidases. Unfortunately, this enzyme action metabolizes and reactivates irinotecan into its toxic form, which causes serious side effects by damaging the intestinal lining.

To minimize irinotecan-related toxicity, doctors have tried using oral antibiotics to kill bacteria that make the enzymes. But antibiotics kill protective gut microbes as well, including those that counteract disease-causing bacteria. A 2010 study in Science involving mice found that drugs that selectively target E. coli beta-glucuronidases can reduce irinotecan’s toxicity.

In the current study, Dr. Kelly and her colleagues investigated whether the composition of a person’s microbiome influenced whether irinotecan would be reactivated or not. The researchers collected fecal samples from 20 healthy individuals and treated the samples with inactivated irinotecan. Then using metabolomics (the study of the unique chemical fingerprints that cellular processes leave behind), the researchers grouped the fecal samples according to whether they could metabolize, or reactivate, the drug. Four of the 20 individuals were found to be “high metabolizers” and the remaining 16 were “low metabolizers.”

Fecal samples in the two groups were then analyzed for differences in the composition of their microbiomes, with a focus on the presence of beta-glucuronidases. The researchers found that the microbiomes of high metabolizers contained significantly higher levels of three previously unreported types of beta-glucuronidases compared to low metabolizers.

“We hypothesize that people who are high metabolizers would be at increased risk for side effects if given irinotecan, but that will require examining the microbiomes of cancer patients—something we are now doing,” says Dr. Kelly.

The findings suggest that analyzing the composition of patients’ microbiomes before giving irinotecan might predict whether patients will suffer side effects from the drug. In addition, as suggested by the 2010 mouse study, it might be possible to prevent adverse reactions by using drugs that inhibit specific beta-glucuronidases.

“Another intriguing idea is to give patients prebiotics,” says Dr. Kelly. “Beta-glucuronidases have an appetite for the carbohydrates found in the inactive form of irinotecan. If we feed patients another source of carbohydrates when we administer irinotecan, perhaps we could prevent those enzymes from metabolizing the drug.”

Beta-glucuronidases in the gut might also interact with commonly used drugs including ibuprofen and other nonsteroidal anti-inflammatory drugs, morphine, and tamoxifen. “In these cases, the issue for patients may not be diarrhea,” says Dr. Kelly. “Instead, if gut bacteria reactivate those drugs, then patients might be exposed to higher-than-intended doses. Our study provides a broad framework for understanding such drug-microbiome interactions.”

The study is titled, “Human microbiome signatures of differential colorectal cancer drug metabolism.” The other contributors are first author and Ph.D. candidate Leah Guthrie, Sanchit Gupta M.D., M.S. (who worked on this project while an Einstein medical student), and Johanna Daily, M.D., M.S., all at Einstein.

The Kelly lab is supported by the National Science Foundation. The authors declare no competing interests.

About Albert Einstein College of Medicine

Albert Einstein College of Medicine is one of the nation’s premier centers for research, medical education and clinical investigation. During the 2016-2017 academic year, Einstein is home to 717 M.D. students, 166 Ph.D. students, 103 students in the combined M.D./Ph.D. program, and 278 postdoctoral research fellows. The College of Medicine has more than 1,900 full-time faculty members located on the main campus and at its clinical affiliates. In 2016, Einstein received more than $160 million in awards from the National Institutes of Health (NIH). This includes the funding of major research centers at Einstein in aging, intellectual development disorders, diabetes, cancer, clinical and translational research, liver disease, and AIDS. Other areas where the College of Medicine is concentrating its efforts include developmental brain research, neuroscience, cardiac disease, and initiatives to reduce and eliminate ethnic and racial health disparities. Its partnership with Montefiore, the University Hospital and academic medical center for Einstein, advances clinical and translational research to accelerate the pace at which new discoveries become the treatments and therapies that benefit patients. Einstein runs one of the largest residency and fellowship training programs in the medical and dental professions in the United States through Montefiore and an affiliation network involving hospitals and medical centers in the Bronx, Brooklyn and on Long Island. For more information, please visit www.einstein.yu.edu, read our blog, follow us on Twitter, like us on Facebook, and view us on YouTube.