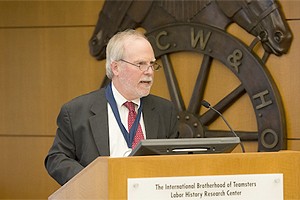 Newswise — Eric Arnesen, a specialist in the history of race, labor, politics and civil rights was officially installed yesterday as the George Washington University’s James R. Hoffa Teamsters Professor in Modern American Labor History, in a ceremony attended by leaders of both the labor union and GW at the International Brotherhood of Teamsters Labor History Research Center.

“Professor Arnesen is a renowned labor historian whose deep knowledge and expertise have made him a leading scholar in his field,” George Washington President Steven Knapp said. “He’s also active in the larger public discussion of labor and labor policy.”

Dr. Arnesen’s work exists at the crossroads of labor and civil rights as they pertain to U.S. history and public policy. His published works include “Brotherhoods of Color,” which explores traditions of black trade unionism and labor activism, and “Waterfront Workers of New Orleans,” an examination of race, politics and Southern labor in the late 19th and early 20th centuries. His current project, a biography of African-American labor and civil rights leader A. Philip Randolph, further demonstrates the connection between labor rights and black equality—a connection the Teamsters also understood.

“[Randolph’s] life was dedicated fighting on both fronts, in his mind these issues were virtually one and the same,” Dr. Arnesen said. “When battling racial exclusion in the newly developed AFL-CIO in the early 1960s, Randolph needed allies, and the International Brotherhood of Teamsters came to his defense.”

Anti-discrimination, Dr. Arnesen noted in his remarks, had long been a Teamsters policy, and one the union emphasized repeatedly during the civil rights movement. That history, and the history of American organized labor in general, must be preserved and passed on, Teamsters General President James P. Hoffa said.

“As society has changed, there are fewer and fewer people that have a shared background with unions, and so the traditions of unions are not passed on as they used to be,” said Mr. Hoffa, who received the President’s Medal in January 2014. “How do we educate people about the great role that unions play in society?”

The Teamsters research center, backed by a $2 million contribution from the labor organization in 2007, is a venue to explore those very roles the American labor movement and the Teamsters have played, Mr. Hoffa said. Teamsters’ records serve as a foundational collection to the archive, which opened in 2010 and includes photos, historical documents, memorabilia, books, ledgers, tools and archival materials dating to the labor union’s founding in 1903.

The task of sharing labor’s history, Dr. Arnesen said, should not stop at the archive’s doors.

“It should not be confined to our students alone,” Dr. Arnesen said. “GW, I believe, has been at the forefront of encouraging those of us who are teachers and researchers to address concerns beyond the ivory tower. I look forward to many, many more years of collaboration ahead to promote the history of the Teamsters and the history of American labor.”

Dr. Arnesen earned a bachelor’s degree from Wesleyan University, and a master’s degree in African American studies and a doctorate in history from Yale University. He arrived at GW in 2009.