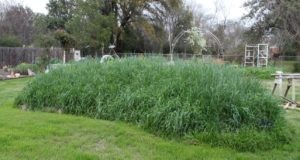 Hugelkultur mounds should be planted with a cover crop such as ryegrass or clover prior to garden establishment to prevent erosion.

Hügelkultur, German for “hill culture,” is the practice of composting large woody material, such as tree logs, to create a raised garden bed, said Masabni, who is based in Overton. Other excess garden waste, including prunings, hedge clippings and brushwood can be utilized to create the no-till bed for plants.

Masabni said hügelkultur is a good way to compost without the hard work of tilling and bed preparation every year. He collaborated with Bridget Corbett, a Master Gardener in Denton, on a hügelkultur project to provide valuable information about the method for growers.

“I joke when I call it the lazy man’s composting,” he said. “As time goes by and the log rots, the deep soil of the bed becomes rich with soil microorganisms, earthworms and microbes. It’s a great way to employ a low-maintenance, no-till strategy for your home garden.”

To create a hügelkultur garden, Masabni said a trench about eight to 10 inches deep and two to three feet wide must be dug to hold larger material such as logs that will create the base support for the mound. Logs should be covered with progressively smaller woody debris from small tree limbs to twigs.

Compost materials, such as grass clippings, hay and manure are then added on top of the woody materials. Poke the compost materials into the cracks and crevices between the logs and brushy material until it is fully covered.

Cover the compost material with the dirt removed to create the ditch, and dig a small trench along the uphill side of the mound.

Masabni said to immediately plant a cover crop, such as ryegrass, clover or wheat to prevent erosion. The soil and plant roots should not be disturbed except to harvest root crops or to pull weeds.

“You always want the mound covered with something that will provide roots to prevent soil erosion,” he said. “The good thing about hügelkultur is you plant your crop and then cut back the plant when it stops producing. Just leave the roots to hold the soil and become part of your compost then plant something else on the mound.”

“The mounds are very well suited to handle summer conditions here in Texas,” he said. “You still have to water because the surface dries but underneath the logs soak up water and provide good moisture to plant roots, especially for mature plants.”

Single crops can be planted in the hügelkultur, Masabni said, but it also performs well with multiple plant varieties, including vegetable crops, herbs and flowers.

“Hügelkultur is a method that people are becoming familiar with and trying more and more,” he said. “It’s a great method for gardeners who want a low-maintenance garden. Once you’ve built the mound, you just plant your crops, water them, maybe practice some weed control and harvest season after season.”