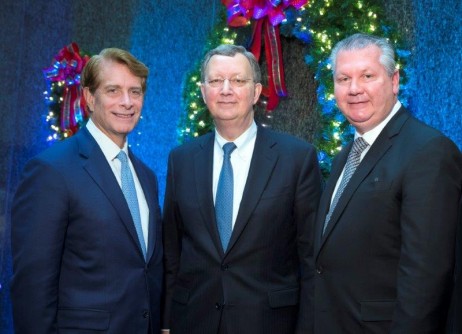 Newswise — Hackensack Meridian Health, New Jersey’s most integrated health care network, is honored to announce the dedication of the Justice Marie L. Garibaldi Medical Plaza at Hackensack University Medical Center and the formal investiture of Joseph E. Parrillo, M.D., chair of the Heart and Vascular Hospital at Hackensack University Medical Center, as the recipient and steward of the Endowed Chair in honor of the late Supreme Court Justice.

Endowed chairs are among the highest honors conferred in academia and the $15 million in support of endowments at Hackensack University Medical Center reinforces its role as one of the top-ranked academic medical centers in the country.

“Justice Garibaldi truly understood the magnitude of endowing a chair to advance medicine and the next generation of cardiologists,’’ said Robert C. Garrett, co-CEO of Hackensack Meridian Health. “We honor her integrity, countless contributions to our health care network and the state judicial system and know her legacy lives on in this generous donation.’’

Dr. Parrillo was recognized for his outstanding academic achievements, excellence in clinical practice and prolific research which can be found in more than 1,000 publications he has authored or co-authored.

“I am so grateful to be the first guardian of the Justice Marie L. Garibaldi Endowed Chair for the Chairman, Heart & Vascular Hospital and for all that it stands,’’ said Dr. Parrillo. “Through my stewardship, I vow to cherish this great honor.’’

At the ceremony, Dr. Parrillo commented: “Endowed Chairs and Professorships provide a sense of continuity and common purpose in scholars and educators who work in a single field from one generation to the next.  Endowed Chairs are a means to enrich and vitalize institutions, and to attract and retain leading researchers and scholars to join institutions such as ours.  Top centers require both physical capital such as buildings and equipment – and human capital (such as clinicians, scholars and educators) which are supported by endowed chairs.  Donors are vital to providing both physical and human capital, as evidenced by Justice Garibaldi’s donation gift.

This endowed chair will support research and scholarship. Research is very powerful.  It is research that decreased the death rate from heart attack from 40% in 1970 to 5% in 2017 by documenting the importance of opening a blocked coronary artery.  Research demonstrating the value of early administration of antibiotics has reduced mortality in septic shock from 50% to 20%.  And research has shown the life-saving value of implanting a defibrillator device in patients at high risk of heart arrhythmias.  The Garibaldi Chair will support research at Hackensack that employs medical databases to improve further our treatment of heart attacks, heart failure, shock, structural and valvular heart disease, and rhythm disturbances.  Endowed chairs play an important role in assuring that lifesaving research will continue and flourish.”

Dr. Parrillo’s involvement in academia has led to significant medical findings. Examples of his work can be found in more than 1,000 publications he has authored or co-authored. His outstanding achievements have led to numerous professional honors and awards such as the Cornell University Medical Center College Alpha Omega Alpha Award for Teaching Excellence and the Distinguished Clinical Educator Award from the National Institutes of Health (NIH). Dr. Parrillo has received the NIH Director’s Award, the highest civil service employee honor, for creating a superior Critical Care Medicine Department, which has greatly enhanced research at the NIH. He has also received the Distinguished Investigator Award and the Lifetime Achievement Award from the American College of Critical Care Medicine.

Additionally, the network has more than 160 patient care locations throughout the state which include ambulatory care centers, surgery centers, home health services, long-term care and assisted living communities, ambulance services, lifesaving air medical transportation, fitness and wellness centers, rehabilitation centers, and urgent care and after-hours centers. Hackensack Meridian Health has 33,000 team members, and 6,500 physicians and is a distinguished leader in health care philanthropy, committed to the health and well-being of the communities it serves.

The Network's notable distinctions include having one of only five major academic medical centers in the nation to receive Healthgrades America's 50 Best Hospitals Award for five or more consecutive years, four hospitals among the top 10 in New Jersey, including Hackensack University Medical Center which is ranked No. 1 by U.S. News and World Report. Other honors include consistently achieving Magnet® recognition for nursing excellence from the American Nurses Credentialing Center, recipient of the John M. Eisenberg Award for Patient Safety and Quality from The Joint Commission and the National Quality Forum, a six-time recipient of Fortune's "100 Best Companies to Work For," one of the "20 Best Workplaces in Health Care" in the nation, and the number one "Best Place to Work for Women." Hackensack Meridian Health is a member of AllSpire Health Partners, an interstate consortium of leading health systems, to focus on the sharing of best practices in clinical care and achieving efficiencies.