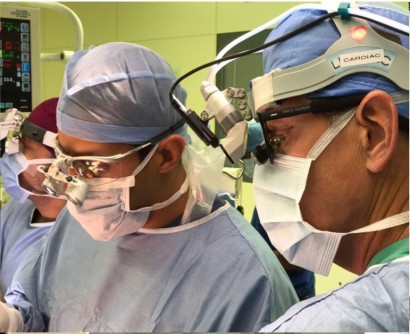 “We take a group consisting of a nurse, anesthesiologist and a perfusionist to Cairo as a part of a mission to take care of patients who are otherwise unable to have surgery,” said Dr. Anderson. “Part of the mission is to teach the staff and the physicians cardiac surgical techniques, as well as the role of the anesthesiologist, perfusionist and the nurses. Our focus is not just to operate, but to teach as well.”

This was Dr. Anderson’s eleventh mission to Cairo.  Traveling with Dr. Anderson from Hackensack University Medical Center included anesthesiologist Daniel Fitzpatrick, M.D., and perfusionist Garland Dance. Kala Varughese is a former cardiac surgical nurse who also traveled with the team. The team was in Cairo for eight days and consulted with 35 patients. The team performed 13 cardiac surgery cases, the most in one mission, at a military hospital in Cairo in conjunction with the Egyptian military.

“We performed regular coronary bypass operations, valvular operations and minimally invasive operations,” added Dr. Anderson. “When we schedule these visits, the word spreads in Cairo and Egypt that we are coming. People line up outside of the clinic with their medical charts in hand. We see them all and evaluate each case, selecting the ones that are the most acute and operate on those patients.  The next time we come back, we often see the same people over again as they move their way up in line.”

Dr. Anderson has performed more than 100 cases since he began organizing these missions. He says he has witnessed a lot of positive changes in the medical staff as well as at the facilities in Cairo.

“When we first started, they didn’t count instruments or sponges and they really didn’t have any concept of sterile technique,” said Dr. Anderson. “We taught them these procedures. The perfusionists, those who run the heart/lung machine, generally aren’t formally trained. They are nurses who tend to learn on the job.   We’ve been helping them to teach all of their perfusionists as well as their anesthesiologists. Each one of us has a role in terms of training the staff. I have been teaching them how to perform minimally invasive surgery and general cardiac surgery.”

With more than 25 years of cardiothoracic surgery experience, Dr. Anderson joined Hackensack University Medical Center in January of 2017 from Albert Einstein Healthcare Network in Philadelphia, where he served as co-director of the Heart and Vascular Institute, and chief of the Division of Cardiothoracic Surgery and Regional Cardiothoracic Surgery Program.

“Hackensack University Medical Center is proud to support Dr. Anderson and his team with this initiative,” said Ihor S. Sawczuk, M.D., president, Hackensack University Medical Center.  “Our team members are performing life-saving procedures on people who otherwise would not have access to world-class health care. They are also imparting their knowledge to the physicians and nurses in Cairo by teaching state-of-the-art procedures and techniques, helping them to achieve better outcomes for their patients.”

“These missions are very gratifying on numerous levels,” added Dr. Anderson.  “From the patients perspective many are highly complex cases that no one there is able to perform.  To be able to offer these patients treatment is very rewarding. Often, patients who have seen us come back to visit us to say thank you again. It has become like a family.  My team and I are honored to take care of these patients who generally would not be able to have surgery or have a good prognosis.”

The Egyptian military is considering sending a team to Hackensack University Medical Center later this year to observe Dr. Anderson and his colleagues at the medical center.