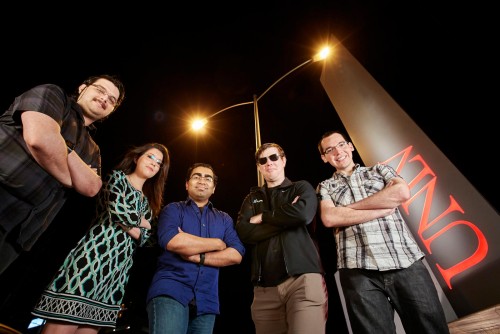 Sometimes it pays to be creative.

This is the first year the “Smart Cities Hackathon,” organized by media platform ReadWrite, was held in conjunction with CES and the City of Las Vegas. More than 300 software developers and designers from around the world participated in the competition, which is aimed at creative problem solving using only computer wits, city public works data, and a handful of new technological devices provided by program sponsors.

It took Team Wingin' It just 10 of the allotted 24 hours to create software that can help the city quickly identify streetlight outages that need repair — a process currently done either manually by a city technician dedicating countless hours to the task or by relying on resident reports. Las Vegas is now looking to implement the team's invention.

“The contest’s main premise was how do you create a safe city,” said team captain Gonzalez, a Ph.D. student in mechanical engineering. “This will increase safety. We’ll have more lighting for pedestrians, cars. Lights won’t be out and unserviced for a long time.”

The team’s name — Wingin’ It — was borne of its humble beginnings.

Gonzalez, who juggles on- and off-campus jobs along with teaching, volunteerism, and her robotics-focused YouTube channel Supershok Labs, initially declined an invitation to participate. But as the competition drew closer, the lure of a free CES badge plus the buzz among science circles proved too hard to resist.

Gonzalez and Varghese scrambled to invite three more friends for a single team meeting just days before the hackathon.

The  five-member team showed up on game day with the intention of working on a project related to energy efficiency in a home — an idea sparked months earlier by an electricity bill that prompted Gonzalez to request and review City of Las Vegas energy records to figure out what had caused her to suddenly rack up a $300 charge.

Team Wingin’ It arrived early, grabbing items from sponsor tables piled high with Amazon Tap (a bluetooth speaker that uses Alexa, a computerized voice system similar to iPhone’s Siri), IBM and Honeywell graphical user interface software, Intel devices, and other top-notch technology goodies. But it was at the City of Las Vegas’ booth, which offered only a staffer armed with open data and ideas about how to use it, that things clicked.

Gonzalez hurried across the conference hall to her team’s station to start downloading the data and begin running simple Excel formulas: “I immediately noticed an anomaly. At night, when there should be energy use reported, there was very little or none at all. In the daytime, when the light should be off, sometimes there would be energy usage. So I realized it might be because of faulty lights.”

The findings were a new revelation for the city, Gonzalez said: “In order for them to know of an anomaly, someone has to manually sit there and monitor it. Or a regular citizen has to report it by calling or filing a complaint through their online system. But that doesn’t always work,” said Gonzalez, who received an error message while testing the site by submitting a fake report.

Drawing on their experience as computer scientists and engineers, the team split up tasks and got to work setting up a server, conducting a visual analysis of data, setting up Alexa using one member’s Amazon account, writing dialogue and commands for computerized voice, and running repeated trials on millions of lines of streetlight data compiled by the city over two years.

Within hours, the team created software that with the click of a button would allow a city public works employee, regardless of his or her level of tech savvy, to quickly produce a list of streetlight outages ranked from oldest to most recent. The list includes the meter ID, street name, and outage report date. What’s more, the employee can access the information verbally by speaking to Alexa, which volunteers to email or read the report aloud.

If the user declines, Alexa humorously scolds the user's choice because “safety is important.” Alexa’s calm, soothing robotic voice then dismisses the user with a flippant pop-culture phrase: “Bye, Felicia!”

“I wish we could have programmed it so she says it with more attitude,” Gonzalez said, laughing.

City officials say the invention makes it possible for them to analyze outages and identify possible problems in near real time.

The project takes Gonzalez, who loved robots growing up, back to her roots. And one of her life’s goals is to help others enjoy technology as much as she does.

“Team Wingin’ It’s project was made for your average home user to use without having technical knowledge. We said let’s make sure a regular person who talks to Alexa will get only the information they want,” she said. “I think it’s great because we (society) should be using technology to better our lives. And everybody from every age to every aspect of knowing or not knowing technology should be able to enjoy it. Some people will enjoy using it, some people will enjoy setting it up. I feel like technology should be used to better society, not hurt it.”