Even people aged 50 to 80 who do use a patient portal aren’t using it fully, U-M/AARP National Poll on Healthy Aging finds

25-May-2018 9:00 AM EDT, by Michigan Medicine - University of Michigan contact patient services 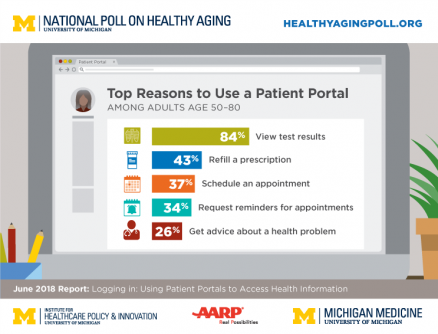 For the half of adults aged 55 to 80 who have used a health provider's secure patient portal, these are the main things they're using the site for.

Newswise — ANN ARBOR, MI – These days, Americans can manage many facets of their lives through the Internet. But a new poll suggests that many older adults still aren’t using online systems to communicate with the doctors and other health care providers they rely on – despite the widespread availability of such systems.

Only about half of people aged 50 to 80 have set up an account on a secure online access site, or “patient portal,” offered by their health care provider, according to the new findings from the National Poll on Healthy Aging.

Age matters too: people over age 65 were more likely than people in their 50s and early 60s to say they don’t like using the computer to communicate about their health, or to say they’re not comfortable with technology in general.

In fact, among older adults who hadn’t yet set up access to a patient portal, 52 percent cited concerns about communicating online about health information. Fifty percent said they didn’t see the need for this kind of access to their health information. About 40 percent just hadn’t gotten around to setting up their access yet; these tended to be adults in their 50s and early 60s.

The poll of 2,013 older adults was conducted by the University of Michigan Institute for Healthcare Policy and Innovation, and sponsored by AARP and Michigan Medicine, U-M’s academic medical center.

For the past several years, the federal government has required hospitals, health systems and other health care providers to offer patient portal options to their patients if they want to earn extra funding from Medicare. The requirements include timely access to records and test results that are part of a provider’s electronic health record system.

Among those who had set up an online portal access to their health provider, most (84 percent) had viewed their results from blood tests or other tests.

But when asked about other portal functions, the numbers dropped off sizably. For instance, only 43 percent had refilled a prescription online, only 37 percent had used a portal to schedule an appointment, and only 26 percent had gotten advice about a health problem from their provider online.

“The health care system has provided patient portals as an efficient way for patients to communicate with their providers. But many older adults are uncomfortable with electronic interactions substituting for a phone call or in-person conversation,” says U-M’s Sarah J. Clark, M.P.H., co-associate director of the poll and an associate research scientist at the U-M Medical School.

“Many older adults still prefer telephone contact with their providers,” says poll director and U-M Medical School professor Preeti Malani, M.D., noting that 47 percent of poll respondents said calling was a better way to explain their request. “We hope providers, and health systems, will take these findings into consideration when designing the ways patients can interact with them.”

The poll’s results highlight the concerns that might be keeping older adults from setting up and logging in to the patient portals available to them.

“’Convenience’ is in the eye of the beholder, and traditional methods of communication with providers still feel more comfortable, accessible, and secure for many older Americans,” says Alison Bryant, Ph.D., senior vice president of research for AARP. “There are great opportunities for us to empower both patients and their caregivers through these technologies, however.”

Another sign that older adults may be missing out on potential portal functions showed up when respondents were asked who else they have authorized to see their health information. Of those who have a portal account, 43 percent said they had authorized someone else to log in to see their information – mostly spouses and partners but also adult children and other family members, some of whom may be their caregivers.

Among those who hadn’t authorized another user, 22 percent said they didn’t know how to set this up, and 35 percent said they prefer to keep their information private. The other 43 percent said they don’t have anyone else who helps with their medical care.  The importance of family support was also highlighted in a recent review paper on older adults and patient portals written by a University of Washington team and published in the journal Medical Informatics.

As patients age and have more complex health needs, providers may want to help their patients understand that they can authorize their loved ones to have such access. A recent IHPI study found that “health supporters” such as adult children are willing and able to help people with chronic illness, but often feel left out by both patients and providers.

The poll results are based on answers from a nationally representative sample of 2,013 people ages 50 to 80. The poll respondents answered a wide range of questions online. Questions were written, and data interpreted and compiled, by the IHPI team. Laptops and Internet access were provided to poll respondents who did not already have it.