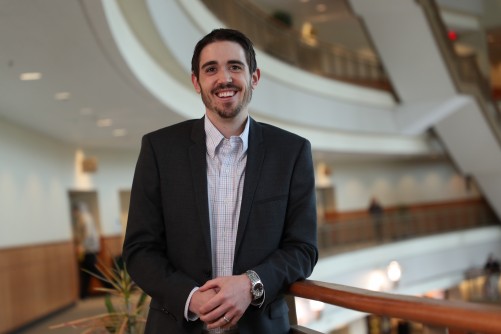 Newswise — WACO, Texas (March 9, 2018) – On average, you will spend about a third of your life sleeping or attempting to sleep. For many, this means more than 25 years of your life will be spent in bed. Given this startling proportion, wouldn’t you like to know more about what helps, hinders and happens while you are asleep?

Michael K. Scullin, Ph.D., director of the Sleep Neuroscience and Cognition Laboratory at Baylor University, spends the majority of his time researching and teaching about such topics.

“One reason I am passionate about studying sleep is because you can't really introspect too much about it, as with nearly everything else in psychology,” Scullin said. “With sleep, you're unconscious at the time you are doing it. Sure, you can wake up and say ‘Oh, how did I sleep last night?’ but when you're actually engaging in the sleeping process, you can't do that. As a result, sleeping becomes an enigma. When you have the right equipment, you can begin to design experiments to figure out what exactly the brain is doing when we sleep and why is it important.”

Below Scullin addresses several common beliefs about sleep and the science that proves or disproves them.

For a time, a rumor circled around that one’s brain cannot handle the mental strain of dying in a dream, and if you die in a dream, you will die.

“That's just not substantiated because people report dying in their dreams, and they report it while they're still alive,” Scullin said. “Your brain can actually handle a lot, and there’s one theory that says nightmares are a functional adaptation to help us survive. It is potentially really functional for your brain to have those stressors in its offline state to help prepare you for situations. A lot of people think that nightmares are bad, and yes, they can be a clinical problem. But when they aren’t to that level, they can help us prepare for stressful situations.”

Sleep apnea and snoring are linked, although not with a 1:1 ratio; some people snore without sleep apnea, but snoring is the biggest risk-factor of sleep apnea, Scullin said. Snoring is caused by an obstruction to one’s breathing pathways. In many cases, individuals who snore wake up gasping for air. That’s an observed sleep apnea, said Scullin. If someone is observing those things, he recommends visiting a clinical sleep physician.

“What if you stopped breathing every few minutes while you were awake during the day?” asked Scullin. “Would you be okay with that? Not only are you not getting enough oxygen to regions of your body, but it puts a lot of stress on your heart. Untreated sleep apnea traumatically increases your risk for heart problems and heart disease. The great thing is, however, if you get treatment, those risk factors all drop down to normal.”

FACT: If you cannot fall asleep in 20 minutes, you should get out of bed.

Seems contradictory, right? In fact, research shows that getting out of bed can improve your ability to fall asleep. Why?

“If you’re lying in bed and can’t fall asleep, you are forming a negative association between your bed and sleep,” Scullin said. “The solution is getting out of bed and going to do something boring without the lights on. Then when you feel sleepy, go back to bed. This way, you only associate your bed with the feeling of sleepiness.”

MYTH: After a night of great “recovery sleep,” you fully restore damage from pulling an all-nighter.

“A really interesting neuroimaging study has been able to show that that sleep deprivation significantly impairs the frontal lobe’s ability to function,” Scullin said. “Your frontal lobe is responsible for memory, decision-making, paying attention and more. The study took individuals who had pulled an all-nighter and then allowed them to get a full night of recovery sleep. When they put them back into the scanner, scientists found that the frontal lobe only partly recovered.”

Most people skip on sleep during weekday nights and then oversleep on the weekend, but this throws off your circadian rhythms, your body’s natural sleeping patterns, said Scullin. This means that when Sunday night comes around, you may have “Sunday night insomnia” – trouble falling asleep because you've trained your body to go to bed later.

MYTH: During a full moon, people have twice as many sleep problems.

A few years ago, there was a big media ‘boom’ claiming that there were more sleep disturbances during a full moon. According to Scullin, the scientific community was skeptical, and labs across the world pooled their data to discover the truth. They found no association between full moons and sleep quality. Why, then, did this myth surface?

“Those who claim they don’t sleep well during full moons probably don't sleep very well on other nights as well, but they only realize it or think about it happening when it is a full moon,” Scullin said. “There is something called the confirmation bias where an individual holds a hypothesis about how the world works, and then he or she will look for instances that confirm the hypothesis. Oftentimes they forget every other instance that contradicts their claim. We think that is what caused the moon-sleep phenomenon.”

FACT: You can fall asleep while driving without realizing it.

People swerve on the road for many reasons – texting, drinking, eating – but not many realize that some individuals swerve because of ‘micro-sleeps.’ According to Scullin, people often operate under the impression that this would never happen to them, but what they don’t realize is that this a frequent occurrence that one has no control over.

“We have a similar biological need for sleep as we do hunger and thirst,” Scullin said. “For thirst, we have to have access to water; for hunger we have to have access to food. But for sleep our body can shut down whenever it needs to. If this happens, our brain will occasionally do this for 3 to 5 seconds if you're really tired – and especially if you're involved in some long monotonous task such as driving down a long highway.”

FACT: Some people’s bodies are paralyzed for minutes whenever they wake up.

Imagine waking up, seeing your biggest fear and being unable to move. Unfortunately, this is a reality for some individuals. Sleep paralysis occurs when brain functions get mixed-up, said Scullin. In rapid eye movement (REM) sleep the brain paralyzes the rest of the body so one doesn't act out his or her dreams, and this is very important.

Some people experience this for a few seconds, others for a couple of minutes. Some people also hallucinate when the part of your brain that is dreaming “crosses over” into your consciousness. These hallucinations are triggered when one is so sleep deprived that the brain is trying to get deep sleep, but it cannot fully wake up immediately afterwards. According to Scullin, there does not seem to be any big clinical issue with sleep paralysis or hallucinations, and they seem to go away over time and in development.

The only way to reliably measure your sleep is to have electrodes attached to your scalp, measuring your brain waves in a sleep clinic. But sleep evaluations are expensive and usually only worth the cost for individuals with sleep apnea or other ongoing sleep problems.

The good news? Baylor’s sleep lab pays volunteers to get their sleep analyzed, and scientists like Scullin are always looking for participants.

FACT: The latest you should consume caffeine is six hours before bed.

In a placebo-controlled study, scientists manipulated whether participants had caffeine one, two, four or six hours before bed, and for each of those conditions they had a placebo control. When the subject’s sleep was measured, they found that in every group, it was harder to fall asleep and sleep quality wasn’t as good as those without caffeine.

For those who think caffeine has no effect on the body, Scullin points out a bigger problem.

“If you can sleep right after drinking a cappuccino, it probably means that you are so terribly sleep-deprived that even with drugs in your system that are intended to keep you awake, your brain is saying ‘I don’t care; I’m putting you to sleep.’”

For more about Scullin and his research, visit the Baylor Psychology and Neuroscience website.

Michael K. Scullin, Ph.D., serves as director of the Sleep Neuroscience and Cognition Laboratory at Baylor University. His research investigates how sleep physiology impacts memory, education, health and aging. He is interested in how people use memory to fulfill daily intentions (a special kind of memory called “prospective" memory) as well as how lifestyle choices including exercise, diet and medication adherence affect cognitive and neural functioning.

The College of Arts & Sciences is Baylor University’s oldest and largest academic division, consisting of 25 academic departments and seven academic centers and institutes. The more than 5,000 courses taught in the College span topics from art and theatre to religion, philosophy, sociology and the natural sciences. Faculty conduct research around the world, and research on the undergraduate and graduate level is prevalent throughout all disciplines. Visit www.baylor.edu/artsandsciences.