Link to full release with images:http://http://www.washington.edu/news/2017/03/21/hans-dehmelt-nobel-laureate-and-uw-professor-emeritus-has-died-at-age-94/

Newswise — Hans Georg Dehmelt, Nobel physics laureate and professor emeritus at the University of Washington, died in Seattle on March 7, 2017, after a long illness. He was 94 years old. Dehmelt was a celebrated scientist who, in a research career spanning more than half a century, developed methods to isolate atoms and subatomic particles and measure their fundamental properties with high accuracy.

For these endeavors, Dehmelt shared the 1989 Nobel Prize in Physics with Wolfgang Paul at the University of Bonn and Norman Ramsey of Harvard University. That announcement, which came hours before sunrise in Seattle on the morning of Oct. 12, 1989, made Dehmelt the UW's first Nobel laureate. He celebrated by telephoning local physician Diana Dundore, whom he had been dating for several years, to ask her a question.

"He called me up in the middle of the night and asked, 'Will you marry me?'" said Dundore. "We'd had a joke that we would get married if he won the Nobel Prize, and that was his way of delivering the news."

Dundore and Dehmelt wed shortly thereafter and remained together the rest of his life.

The 1989 Nobel Prize honored Dehmelt and his co-recipients for precision. They had each developed highly accurate techniques to study atoms and subatomic particles. Dehmelt had built the first Penning trap, a type of "ion trap" to isolate particles and hold them in place using an array of electrical and magnetic fields. The Penning trap was first used to study charged atoms — called ions — and later subatomic particles like the electron.

Once a particle or ion was captured by the trap, Dehmelt and other physicists could observe the behavior of a particle in near isolation, without any interfering forces from nearby particles. That way, they could make detailed measurements of a particle's various properties. The trap also let scientists observe and measure the minute, discrete changes to an atom or subatomic particle due to quantum mechanics, the complex array of probabilistic rules governing all matter.

"Hans Dehmelt put the UW Department of Physics on the map as a nationally competitive, top tier department," said UW professor Blayne Heckel, chair of the Department of Physics. "His legacy of table-top, high-precision, fundamental physics experimentation remains a strength within the department. The electron trap technology developed by Professor Dehmelt is currently being employed at UW by a new generation of researchers in an experiment to measure the mass of the electron neutrino."

Among other achievements, these methods allowed Dehmelt and his collaborators to observe "quantum jump" events where an isolated atom changes energy states; measure the magnetic properties of a single electron to the accuracy of 2 parts per 10 billion; and hold an electron in suspension for several years. Today, researchers continue to apply Dehmelt's methods and discoveries in efforts to develop quantum computers.

He worked closely with UW colleagues, such as physics professor emeritus Robert Van Dyck, and mentored young scientists such as 2012 Nobel laureate David Wineland, who was a postdoctoral researcher in Dehmelt's UW laboratory in the 1970s.

"Hans Dehmelt is well remembered for proposing that it would be possible to isolate a single elementary electron and to measure its magnetism," said Van Dyck. "He was also fond of reminding us that a few very wise and prominent physicists said this was impossible. Not only did we succeed, even well beyond our own expectations, but this work produced at that time the best level of agreement between any research measurement and the theory that predicted the given result."

A career spent reaping the rewards of precision began with a childhood love of tinkering. Dehmelt was born on Sept. 9, 1922, in Goerlitz, Germany, and raised in Berlin. He attended the Gymnasium zum Grauen Kloster. As a child, Dehmelt was fascinated with radios, and he earned his doctoral degree in physics at University of Goettingen in Germany in 1950.

In 1952, Dehmelt immigrated to the United States to work as a postdoctoral researcher at Duke University. In 1955, he came to the UW as a visiting assistant professor. Two years later he joined the faculty as an associate professor and was promoted to full professor in 1961. Dehmelt was elected to the American Academy of Arts and Sciences in 1977 and to the National Academy of Sciences in 1978. In 1995, he received the National Medal of Science from President Bill Clinton. Dehmelt remained at the UW until his retirement in 2002.

Outside of the laboratory, Dehmelt enjoyed attending ballet performances. He and Dundore met at a reception for the Pacific Northwest Ballet. Dehmelt also loved classical music, particularly works by Beethoven and Stravinsky. For years, he practiced yoga to relax, and in retirement he and Dundore took daily walks around Seattle.

Dehmelt was preceded in death by his first wife, Irmgard Lassow; his son Gerd; his sister Brigitte and brother Bernard. In addition to Dundore, who lives in Seattle, survivors include his grandson Leif Dehmelt, who is a cell biologist in Germany; and a great-granddaughter. 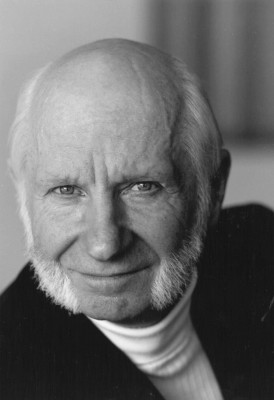 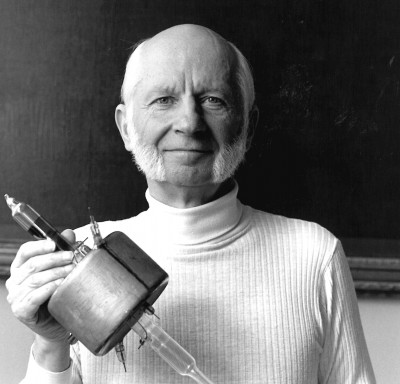 Caption: Hans Dehmelt with one of his traps.