A University of Wisconsin-Milwaukee student from a middle class background combined scholarships and jobs to pay for all his college.

2-Aug-2016 11:05 AM EDT, by University of Wisconsin-Milwaukee
favorite_border 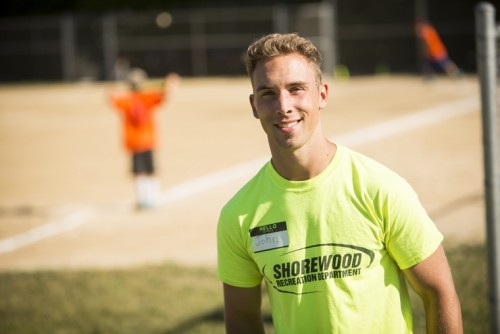 One of John Parlier's three jobs was working with a youth baseball program in the summer.

What’s better than graduating with honors?

How about graduating with honors and no student debt?

Newswise — University of Wisconsin-Milwaukee criminal justice major John Parlier accomplished both feats when he graduated in May 2016. And he already has money in the bank for graduate school – as a result of scholarships and the three jobs that helped pay for his undergraduate education. It also helps, he said, that he lived with his family two blocks from campus and finished his degree in three years.

With six younger siblings and hard-working middle class parents, Parlier knew he had to make some careful decisions about financing his college education.

“I had scholarship offers from Marquette, St. John’s and Washington University in St. Louis, but even with those gigantic scholarships, I would have ended up needing $10,000 or $15,000 more. When I put everything in balance, I decided UWM was the best place for me. Three years later, I can say that was a good decision.”

His three jobs over his college career included working summers for the youth baseball program in a nearby suburb, delivering pizzas year round and serving as athletic director for Catholic East Elementary School.

In the fall, Parlier plans to start graduate work in criminal justice at UWM, and then apply to the police academy in Madison in the fall of 2017 (the first year he is eligible). He wants to complete as much of his graduate work as possible before heading to the academy. He plans, he said, to complete the master’s degree through online courses or working out his schedule so he can commute back to Milwaukee.

Parlier’s career goal is to become an investigator, either as a police detective or for a federal agency such as the FBI.

A bit of that interest grew out of watching television police shows, he admitted with a smile: “I’d be lying if I said that didn’t entice me a little, but obviously that’s not the way it is in real life.”

Most of his interest came from his favorite subjects in high school – sociology and social studies.

“What I wanted was a practical job that required the social sciences, and criminal justice is essentially sociology with legal terms thrown in.”

The mental and physical challenges of the job also appealed to him, as well as the chance to make a difference.

“I like thinking that every day I’m working toward making the community a better place, a safer place.”

He credits UWM’s criminal justice program and classes he took through the university’s Honors College for giving him a realistic view of modern policing.

“We talked a lot about the issues – crime and race. I got a better understanding of marginalized communities, how they’re viewing police and what changes need to be made.”

A study-abroad trip to Japan, where law enforcement focuses on community policing, also gave him new insights, as did an Honors College course on Black Lives Matter.

“Those Honors College classes were right up my alley since I’m someone who learns best from dialogue and talking to individuals. I was in a class with 15 people having a conversation.”

The diversity of classmates and topics also impressed Parlier. “That was a great class. I had good conversations with different classmates on police work … What does the community think in terms of ‘serve and protect.’ To do that right, everyone has to feel you’re serving and protecting them, not just a select few.”