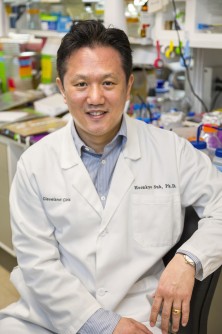 From the nominees submitted in each competition, the foundation selects 10 investigators to receive a Hartwell Individual Biomedical Research Award, which will provide support for three years at $100,000 direct cost per year. In addition, for each funded nominee, the participating institution will receive a Hartwell Fellowship to fund one postdoctoral candidate who exemplifies the values of the foundation. Each Hartwell Fellowship provides support for two years at $50,000 direct cost per year.

Each year, the Hartwell Foundation announces its Top Ten Centers of Biomedical Research. Selected institutions hold an internal competition to nominate three principal investigators for a Hartwell Individual Biomedical Research Award to pursue early-stage, innovative pediatric research that has not yet qualified for significant funding from outside sources.

“We are honored to be chosen as a top 10 research center of excellence in children’s health among this illustrious group,” said Lynn T. Singer, deputy provost and vice president of academic affairs, “especially as it demonstrates Case Western Reserve’s commitment to translational approaches that could rapidly benefit children’s health.”

Suh, who is also an assistant staff member in the Department of Stem Cell Biology at Cleveland Clinic, was awarded for his work entitled, “Hippocampal Nerve Cell Networks in Autism Spectrum Disorders.”

More than 3.5 million children in the United States are diagnosed with autism, with one of 68 younger than age 8 estimated to have the disorder. Suh’s work will test a new idea that autism is a disorder of specific neural circuits, which are structural arrangements of neurons and their interactions with each other.

Suh theorizes that aberrant neural circuits in the part of the brain called the hippocampus formed during fetal development and early childhood cause autism.

As fetuses and young children develop, new hippocampal neurons integrate into existing neural circuits and make numerous connections with other parts of the brain, especially the cerebral cortex. The neural circuits connecting the hippocampus and the cortex ensure the information-flow necessary for learning, memory, emotion, language and social interaction. Problems in these connections may be tied to the development of autism.

To evaluate the possible contribution of aberrant neural circuits to autism pathology, Suh will map and manipulate brain neural circuits in a mouse model. Understanding how neural circuits are anatomically and functionally altered in autism animal-models will provide greater insight into how autism develops and progresses in affected children.

“If we find that aberrant neural circuits in the hippocampus play an important role in the development and progression of autism, this will provide a compelling foundation for developing therapies for autism by targeting those circuits, said Suh, who received a PhD in neuroscience from the University of Michigan and a bachelor’s degree in biochemistry from Yonsei University in Seoul, Korea.

“We have enjoyed a strong and growing relationship with Case (Western Reserve), as evidenced by its success in the Hartwell annual competition,” said foundation President Frederick A. Dombrose. “This September, we plan to hold our Ninth Annual Meeting Biomedical Research (a meeting of the funded investigators) in conjunction with the university.”

Case Western Reserve has already initiated the limited submission process for the next round of funding from the Hartwell Foundation. Letters of intent are now being taken from those individuals seeking nomination in the areas of basic and applied-life sciences, including engineering focused on biomedical applications. The proposed research must have the potential to benefit children of the United States. Information is posted online at https://www.research.case.edu/limitedsubmissions/Hartwell2016.cfm. For questions about the process, please contact Stephanie Endy, associate vice president for research, at [email protected].

Case Western Reserve has six other faculty who are current or former Hartwell investigators:• 2014, Brian A. Cobb, an associate professor of pathology, for his work entitled, “Harnessing Lymphocyte Cooperativity for the Treatment and Prevention of Asthma.”

Two fellowships have also been awarded by Case Western Reserve from the Hartwell Foundation support:

• 2014, Luke Bury, PhD, for his work in genetics and genomics sciences.

• 2013, Andrew Barnes, PhD, for his work in psychological sciences and biomedical engineering.

In addition, in 2014, Sears received a Collaboration Award in association with a researcher from Cornell University for their proposal entitled, “Overcoming Retinopathy of Prematurity and Chronic Lung Disease: Unified Systemic Approach.” The collaborators received $698,407 in combined direct cost over three years.