Have You Heard? Nearly 15 Percent of Work Email Is Gossip 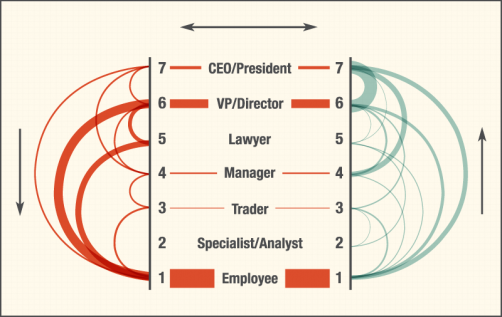 Eric Gilbert of the Georgia Tech School of Interactive Computing examined the Enron email corpus to determine the amount of gossip in workplace email, and this figure shows how gossip was found to flow among every layer of the Enron hierarchy. The thickness of the lines represents the level of gossip, which flowed down the hierarchy (left side of ladder), up the hierarchy (right side) and between employees of the same rank.

Newswise — According to some estimates, the average corporate email user sends 112 emails every day. About one out of every seven of those messages, says a new study from Georgia Tech, can be called gossip.

Assistant Professor Eric Gilbert of the School of Interactive Computing examined hundreds of thousands of emails from the former Enron corporation and found that—by the definition of “gossip” as messages that contain information about a person or persons not among the recipients—14.7 percent of the emails qualify as office scuttlebutt. What’s more, Gilbert found that gossip is prevalent at all levels of the corporate hierarchy, though lower levels gossip the most. (Click here to watch a YouTube video about this research.)

“Gossip gets a bad rap,” said Gilbert, an expert in social computing who runs the Comp.Social Lab at Georgia Tech. “When you say ‘gossip,’ most people immediately have a negative interpretation, but it’s actually a very important form of communication. Even tiny bits of information, like ‘Eric said he’d be late for this meeting,’ add up; after just a few of those messages, you start to get an impression that Eric is a late person. Gossip is generally how we know what we know about each other, and for this study we viewed it simply as a means to share social information.”

Still, another finding was that “negative” gossip, characterized through a Natural Language Text Processing analysis, was in fact 2.7 times more prevalent than positive gossip, though a significant portion of the messages were sentiment-neutral. The findings, according to Gilbert and Ph.D. student Tanushree Mitra, represent an important test of anthropological theories about gossip in what can reasonably be called the world’s most popular electronic social medium: email.

“There is a rich literature in anthropology and sociology on the universality and utility of gossip among human social groups,” Mitra said. “A recent survey of that literature summarized gossip as having four main purposes: information, entertainment, intimacy and influence. We found evidence of all those categories in the Enron emails, relating to both business and personal relationships.”

Might these findings be unique to Enron? After all, actions leading to the energy-trading company’s 2001 bankruptcy have earned it a notorious place in U.S. corporate history. Could such an environment lead to social behavior that is outside the norm?

“Enron certainly had what could be called a ‘cowboy culture,’ but I suspect the way they behaved internally to each other did not differ significantly from most other U.S. corporations,” Gilbert said. “A lot of the emails we’re looking at were from the rank-and-file, and it was the Enron CEOs—a tiny fraction of its employee population—who initiated and directed the actions that brought the company down. The average employee had no idea what was going on.”

Indeed, the Enron corpus—some 600,000 messages purchased following the company’s bankruptcy and now made freely available for study—represents the world’s largest publicly accessible body of naturally occurring emails, and it has provided grist for numerous scientific and technical advances. For example, Gilbert said, email spam filters took a huge leap forward in efficiency in 2005 due largely to advancements made from analyzing the Enron corpus. And recently, Gilbert himself used Enron emails to discover that certain words and phrases in email strongly predict whether those messages are delivered up or down the corporate hierarchy. Still, he admitted to finding a slightly higher level of workplace gossip flowing around via email than he expected.

“I was a little surprised that it turned out to be almost 15 percent,” Gilbert said. “But then again, gossip is something we all do in every aspect of our lives. I imagine corporate executives will probably take note of this—and then send an email to Jennifer down the hall saying that Bob in purchasing gossips all the time.”

Gilbert’s and Mitra’s findings are summarized in the paper “Have You Heard? How Gossip Flows Through Workplace Email,” which Mitra is presenting today at the 6th International AAAI Conference on Weblogs and Social Media (ICWSM ’12), being held at Trinity College in Dublin, Ireland.