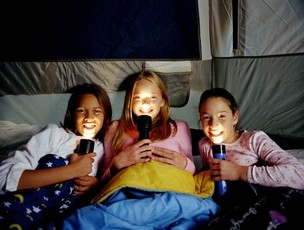 Girls with flashlights camping out 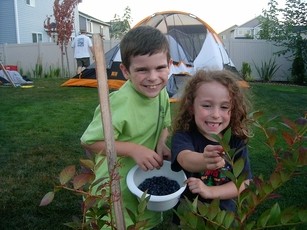 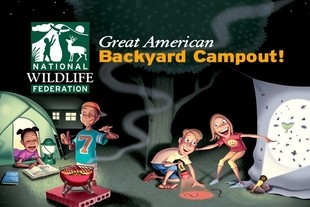 Newswise — What: Great American Backyard CampoutHigh gas prices keeping you at home? You're not alone. This spring America witnessed the steepest decline in driving since 1942. Instead of packing up and hitting the road, here's an idea for family fun, no further than your backdoor. The National Wildlife Federation encourages parents and kids alike to trade their website for a campsite.

Turn off computers, TVs, iPods, Wiis, MP3 players, cell phones and all things high tech, to experience a night with Mother Nature, listen for nocturnal wildlife (maybe even see a few), star-gaze, cook outdoors, tell stories about Bigfoot and the Loch Ness Monster, and explore a whole other world right in their own backyard.

Last year over 42,000 people from around the country participated in the Great American Backyard Campout. You don't need to go to Yosemite National Park to experience the great outdoors and the wonders it has to offer. Just open up your backdoor! June has been officially designated Great Outdoors Month by the White House and more than half of America's governors and what better way to celebrate.

Where: Backyards across AmericaWhen: Saturday night, June 28, 2008Who: Families, friends, neighbors, and communitiesWhy: This initiative is part of a National Wildlife Federation campaign to rescue our nation's kids from what famed author Richard Louv calls "nature deficit disorder." Research now shows that kids spend an average of 44 hours per week staring at electronic screens, TV, video games and computers -- for the first time in our country's history; we have an entire generation that is growing up disconnected from nature.

This can lead to a weaker immune system, greater dependency on Attention Deficit Hyperactivity Disorder (ADHD) drugs, lost creativity, less self-sufficiency, lack of interest in maintain the wildlife legacy they have inherited. To say nothing of the good old fashioned fun they are missing.

The National Wildlife Federation is providing everything you need to head out into the great outdoors called your backyard. The web site has packing lists, recipes, nocturnal wildlife guides, exploration activities, nature guides. Check it out at www.backyardcampout.org. People can even sign up on the site to share their campout plans and experiences.

The National Wildlife Federation inspires Americans to protect wildlife for our children's future.