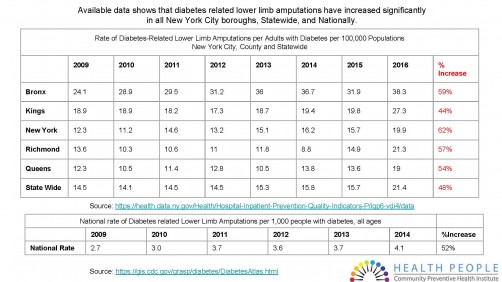 Summary:  In barely the past decade, New York City has seen a 55% increase in diabetes-related foot amputations among patients known to have diabetes; this includes an almost 60% increase in the Bronx, the borough with the highest rate of diabetic foot amputation and 62% and 57% increases in Manhattan and Staten Island respectively, a 54% increase in Queens and 44% increase in Brooklyn. Lesser, but still striking increases have been observed in New York State and nationally.

These increases in an often crippling, but significantly preventable complication of diabetes have produced no noticeable concern or action from the New York City Department of Health and Mental Hygiene or from the New York State Department Health----or from New York’s large and influential medical establishment.

Yet, diabetes-related foot amputation is so potentially preventable that it is, in fact, the sole stand-alone surgery included on the federal list of 14 potentially preventable adult hospitalizations known as the Prevention Quality Indicators (PQIs.) The PQIs are targeted hospitalizations widely tracked under the guidance of the federal office of AHRQ (Agency for Healthcare Research and Quality) and used to gauge the effectiveness of both clinical care and community health efforts in states and counties. “[These are] conditions for which good outpatient care can potentially prevent the need for hospitalization, or for which early intervention can prevent complications or more severe disease,” the AHRQ website emphasizes.2

However, in New York, city and state policy makers are not using this key data to improve community health care. The startling rise in the amputation rate documents a complete failure of public health, clinical institutions and policy makers to promote feasible, demonstrated approaches to amputation prevention---including good foot-care education for patients and appropriate clinical monitoring of the feet of diabetics.

In sum, diabetes-related foot amputation is substantially preventable---yet more and more prevalent---- to the mammoth cost of the medical system and to terrible cost for individual patients.

Review failures in prevention, gaps in accessible data and long pattern of city and state inaction.

Method:  The only publicly available data in New York which enables an overview of diabetes-related amputation trends is the annual state reporting on the Prevention Quality Indicators. All hospitals now report this data to the federal AHRQ which compiles it by state and county. As noted, Diabetes-related lower limb amputation is considered so potentially preventable that it is the sole stand-alone surgery included in the 14 adult Prevention Quality Indicators (which also include conditions like hypertension, heart failure, low birth weight and urinary tract infection admissions.)3

Results:  City, State and National results are summarized in the chart on Page 1

New York City has experienced an astounding increase in diabetes-related lower-limb amputations for almost a decade. The most recent eight years (2009 to 2016) for which Prevention Quality Indicator data is available show that the city, overall, experienced a 55% rate increase in lower-limb amputations. Four of five boroughs had a more than 50% increase. The Bronx, with the highest rate of amputations, had almost a 60% increase.

The overall New York State amputation rate (which includes New York City) increased by 48% during the same time period. Generally, rate increases seem to have most escalated after 2011.**

National data for diabetes-related foot amputations are only available from the Centers for Disease Control and Prevention only through 2014. The CDC expresses its amputation rate as the number of amputations per 1,000 people who have diabetes. It does not project an overall population rate; in sum, its rate defines the specific risk that an individual with diabetes will undergo an amputation. This CDC data also shows a pronounced national increase in amputations---from 2.7 per 1,000 patients with diabetes in 2009 to 4.1 per 1,000 patients with diabetes in 2014, a 52% increase.4 Unfortunately, the CDC does not release this important calculation by state, much less by county. (Please see below for discussion of major data gaps.)

Lower limb amputation can refer to a range of surgeries---from removal of toes to above-the-knee amputation. Major causes are poor vascular circulation and peripheral neuropathy which deadens feeling in the foot so that patients are often not aware they have small lesions which can ulcerate rapidly.

While among the worst complications of diabetes, lower-limb amputation is also substantially preventable when patients receive education on proper foot care, have regular clinical foot examinations and quick access to specialists when needed.

Even targeted education alone reduces amputation rates---particularly because proper education alerts patients to immediately contact their doctor when they have the smallest foot lesion or problem, thereby helping prevent more severe ulcerations that lead to amputation.

A major analysis published in 2017, for example, concluded that interventions, such as group education, costing up to $150 per patient and directed at diabetics at moderate to high risk for foot ulcers would provide cost savings even by reducing foot ulcer incidence by 10%. (Important note:  this probabilistic analysis only calculated savings from decreased foot ulcers; it did not add in the further mammoth savings from amputations prevented through foot ulcer prevention. Overall, foot ulcers precede some 85% of diabetes-related amputations. One above knee amputation, for instance, can cost $250,000 just for the first year, adding the costs of surgery, prosthetics, physical therapy and other ongoing care!)5

As the AHRQ underscores “Patients with diabetes may be hospitalized for diabetic complications if their conditions are not adequately monitored or if they do not receive the patient education needed for appropriate self-management.”1

Nothing could be clearer than that the New York City, New York State and CDC data alike reflect pervasive failures to utilize well-documented amputation prevention strategies for patients.

Disturbing Mis-Statements on Amputation Trends by the New York City Department of Health and Mental Hygiene and the Centers for Disease Control and Prevention:

The more recent increases in diabetes-related foot amputation are not simply increases----but represent a major reversal in the large decreases in diabetes-related amputation in the decades prior to 2010. This shift---where a major disease complication that was going down for years then climbs back up---makes it ever more distressing that public health officials have not paid attention to amputation rates. Instead, both the New York City Department of Health and the Centers for Disease Control and Prevention have issued fundamentally misleading reports on amputation trends.

In the last overview the New York City Department of Health and Mental Hygiene released on city diabetes-related amputations, which was published in 2013, the Department reported that New York City amputations had decreased by 11% between 2000 and 2011; in the following year, 2014, in its own last released study on diabetes-related foot amputation, the Centers for Disease Control reported that the national rate of lower extremity amputation for people with diabetes had declined by 51.4% between 1990 and 2010!6

These reports---especially the Centers for Disease Control report--- received extensive media coverage. Yet, they gave the public an entirely wrong sense that foot amputation was being steadily controlled. Data like annual amputations rates takes time to collect; as often occurs in medical and public health reports, these reports were released with a lag of 3 or more years after the last data analyzed. However, foot amputations had already started to increase by the reports’ actual release and it was increasingly evident the claim of rates decreasing was mistaken.7 Yet, in the more than four years since these reports were issued, neither the New York City Department of Health nor the Centers for Disease Control has undertaken any updated report on foot amputation---and correctly told the public, and medical world, that amputation is soaring and has become a major crisis that must receive attention.

As observed, diabetes amputation data is generally expressed in two ways----as an amputation rate f or diabetics per 100,000 population or as a clear, straightforward numeration of amputations per a defined number of diabetics as seen in the CDC’s number of amputations for every 1,000 people with diabetes.

While the population rate as used for the Prevention Quality Indicators is helpful for monitoring population trends, it is actually the number of amputations per a defined number of diabetics that could most clearly help local communities, health advocates and people who have diabetes best understand their direct risks of amputation. In its 2014 Diabetes Atlas, for example, the Centers for Disease Control reported that the national rate of amputation was 4.1 amputations for every 1,000 people with diabetes and there had been 108,000 total amputations in the United States. 4

Obviously, amputation rates per patient with diabetes in some localities are much higher than this (and some lower) but ordinary people and local public health advocates cannot find out these local risks. Only certain large institutions, such as hospitals and health departments can readily access data on direct amputation risk for a person with diabetes in a county or state---or, most usefully, zip code. The Centers for Disease Control and Prevention, while it releases the national average of amputations for every 1,000 people with diabetes doesn’t even report this revealing rate by state, much less by county. Meanwhile, only the CDC reports the actual overall number of amputations. Neither New York State nor New York City report this key number. Although the city did report that there had been 2,744 amputations in 2011---in the same report where it claimed the amputation rate was decreasing----this has been removed from the Department of Health website.6

Conclusions:  The rising foot amputation rate underscores an overall indifference in public health and the medical establishment to the well-recognized potential of preventing a complication and outcome which widely cripples people----especially people who live in lower-income communities and who are black and Hispanic.

Like the New York City Department of Health and Mental Hygiene, the New York State Department of Health has absolutely refused to even fund primary diabetes prevention in the form of the well-recognized National Diabetes Prevention Program. New York City, although it declared diabetes an “epidemic” in 2013(!), has taken none of the public health measures----from real and consistent public information campaigns to extensive clinical training and patient education---- that are typically used to fight epidemics. Indeed, in 2017, Crain’s Health Pulse Extra reported that the New York City Department of Health and Mental Hygiene spent so little on diabetes-related programs----about $2.8 million in a $1.6 billion total health budget---that it did not even bother to clearly break out diabetes spending as it does for other major public health issues such as HIV/AIDS and tobacco control.8

The indifference to diabetes on every level is totally unacceptable---and literally crippling communities.

** Note:  Since AHRQ stopped counting toe amputations in the PQI in 2015, it is important to realize that the rising rate in recent years entirely reflects increases in more severe and crippling amputations.