Heart-on-a-Chip: Influence of Static and Perfusion on Cardiac Cells 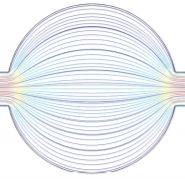 Newswise — A new report in the October 2017 issue of SLAS Technology shows how microsystems can be used to understand processes in heart tissue in detail and to test newly developed compounds applied in the treatment of cardiac diseases.

Their results support their hypothesis that external stimulation (continuous medium flow) enhances both the growth and parallel orientation of cardiac (H9C2) cells; and that the use of verapamil, L-type calcium channel blocker, inhibits H9C2 cell proliferation in cultures performed under perfusion conditions. The authors observe that these parameters depend on the geometry of the culture microchamber.

To study cell growth after incubation with verapamil hydrochloride, poly(dimethylsiloxane) (PDMS)/glass microfluidic systems with three different geometries of microchambers (a circular chamber, a longitudinal channel, and three parallel microchannels separated by two rows of micropillars) are prepared. The authors find that static conditions do not enhance the growth of H9C2 cells in the microsystems. On the contrary, perfusion conditions have an influence on division, morphology, and the arrangement of the cells. The highest number of cells, their parallel orientation, and their elongated morphology are obtained in the longitudinal microchannel, showing that this kind of microsystem can be used to understand processes in heart tissue in detail and to test newly developed compounds applied in the treatment of cardiac diseases.

Visit SLAS Technology Online to read "Heart-on-a-Chip: Influence of Static and Perfusion on Cardiac Cell Proliferation, Morphology, and Alignment." SLAS Technology is one of two MEDLINE-indexed scientific journals published by SLAS. For more information about SLAS and its journals, visit www.slas.org/journals.