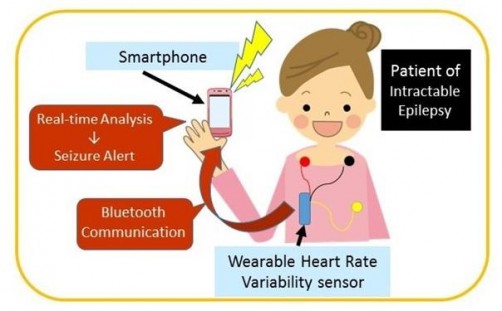 Representation of the wearable epileptic seizure prediction device that is under development. 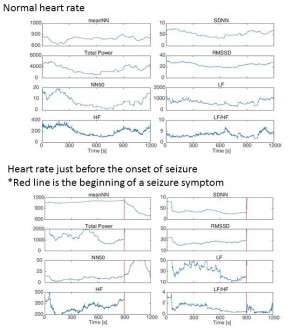 It is difficult to determine the difference between the normal heart rate and the heart rate before seizure onset when using an ECG to analyze heart rate variability. 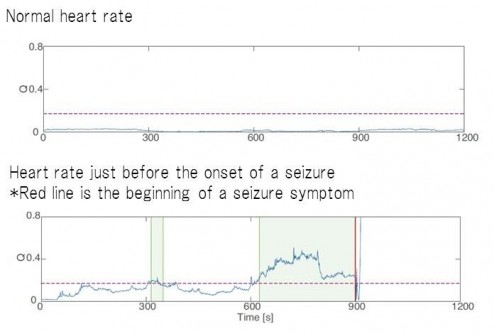 The onset of a seizure is made very clear by using multivariate statistical process control to analyze heart rate variability.

Newswise — Epilepsy is a neurological disorder that causes seizures of many different types. Recent research from Japan has found that epileptic seizures can be more easily predicted by using an electrocardiogram to measure fluctuations in the heart rate than by measuring brain activity, because the monitoring device is easier to wear. By making more accurate predictions, it is possible to prevent injury or accident that may result from an epileptic seizure. This is a significant contribution toward the realization of a society where epileptic patients can live without worrying about sustaining injury from an unexpected seizure. This finding comes from the combined research of Kumamoto University, Kyoto University and Tokyo Medical and Dental University.

Epilepsy is a disease that affects 1% of the global population. It is a chronic disease of the brain characterized by recurrent seizures in which excessive excitation suddenly occurs in nerve cells (neurons) in the brain.

Seventy percent of all epileptic patients are able to go through their daily lives without any problems due to the suppression of seizures through anti-epileptic drugs. However, some patients have drug resistant epilepsy where their seizures cannot be controlled by medication, and they live in a constant state of fear that an epileptic seizure may occur at any moment. For this reason, development of a method to predict epileptic seizures has been strongly desired.

Previous attempts at predicting epileptic seizures by heart rate did not have very high accuracy. It was difficult to determine the difference between the normal heart rate and the heart rate just before the onset of an attack. Additionally, differences among individuals was large, and there were many false positives. Practical application was therefore considered to be difficult.

"We analyzed heart rate fluctuations in the electrocardiographic data of 14 patients who had been hospitalized for long-term EEG video monitoring using a novel technique," said Dr. Toshitaka Yamakawa, Assistant Professor at Kumamoto University.

The researchers used a Multivariate Statistical Process Control (MSPC) to analyze the heart rate variability. The results produced accurate predictions (91%) for epileptic seizures. Furthermore, predictions could be made an average of 8 minutes (494ÂÂ±262 sec) before seizure onset. The difference between normal and preictal (before-seizure) heart rates was made very clear, and there were few false-positives (0.7 times/hour). These result shows that it is possible to make accurate predictions of epileptic seizures.

"The next step is to develop a wearable seizure prediction device," said Dr. Yamakawa. "With that kind of device, patients would be able to ensure their safety before a seizure occurs and since the envisioned device would be attached to the chest, where it's invisible externally, they would be able to have normal daily lives while wearing it. They wouldn't need to be afraid of sustaining injury due to an unexpected seizure."

This research was posted in the medical engineering journal, IEEE Transactions on Biomedical Engineering and was introduced in the Editors' Choice section of Science Translational Medicine. 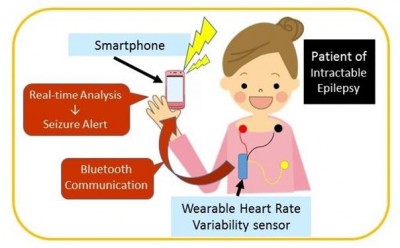 Caption: Representation of the wearable epileptic seizure prediction device that is under development. 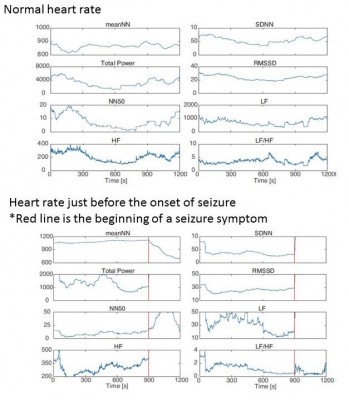 Caption: It is difficult to determine the difference between the normal heart rate and the heart rate before seizure onset when using an ECG to analyze heart rate variability. 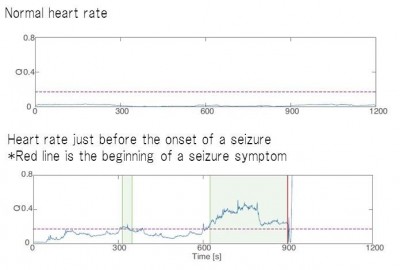 Caption: The onset of a seizure is made very clear by using multivariate statistical process control to analyze heart rate variability.