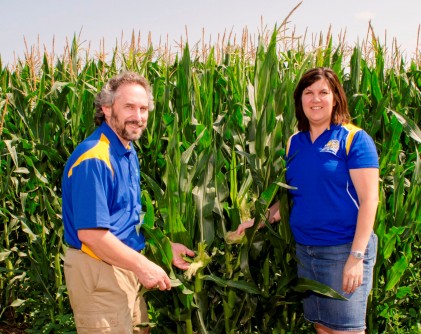 State climatologist Dennis Todey and climate field specialist Laura Edwards from the South Dakota State University Extension office in Aberdeen examine the condition of corn in southeastern South Dakota. The lack of rain in July has had a limited effect on the crops thus far because of the cool temperatures, Todey said.

Newswise — Two new online decision-making tools are available to farmers through the U.S. Department of Agriculture’s Useful to Usable, or U2U, research project, according to state climatologist and South Dakota State University associate professor Dennis Todey. The project is funded through the Agriculture and Foods Research Initiative.

Corn Growing Degree Days, or GDDs, will show producers how their crops are developing in lieu of this year’s planting delays and a cool summer, explained Todey, who is the South Dakota U2U project director. GDDs are a measure of heat accumulation used to predict plant development rates. Farmers can choose their location, when the corn was planted and the number of days it takes to reach maturity. The program then assesses current development compared to a 30-year average and projects tasseling and maturity dates, according to Todey. The farmer can then compare that with when the first freeze has occurred during any of the last 30 years. A second tool, the Climate Patterns Viewer, allows farmers to examine the impact global climate patterns, such as El Niño Southern Oscillation and the Arctic Oscillation, have had on the Corn Belt. “This is very timely, since we’re looking at a pending El Niño,” he added. Farmers can track month by month how these oscillations have influenced temperatures, precipitation and subsequently crop yields.

These and other online tools can be found by going to the U2U website at http://www.agclimate4u.org and clicking on the “Decision Dashboard” tab.

Farmers are producing crops under more variable conditions, so these tools can be critical to both food safety and the farmers’ economic survival, Todey explained. Two additional tools are under development—one looking at the impact of inseason nitrogen application and another to help farmers decide whether to invest in an irrigation system.

“The goal of U2U is to develop a dashboard of tools people can use for decision-making not only within the season but also when looking ahead at multiple seasons,” said Todey. The project, which is headed by Purdue University, involves researchers from 10 land-grant universities in the Corn Belt. “U2U capitalizes on the work scientists have been doing on longer-term practices that are better for sustainable corn production,” Todey said. Teams of agronomists, sociologists, climatologists and environmental and soil scientists are examining all aspects of the corn production system.