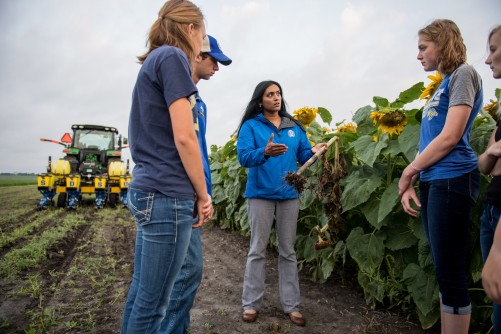 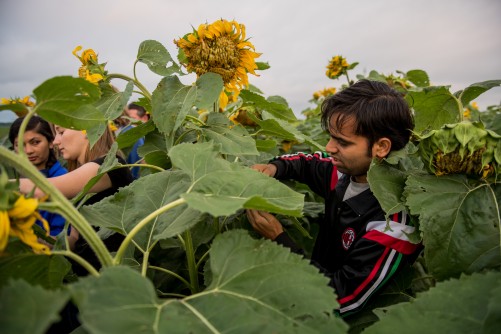 Newswise — Cool, wet conditions during and after flowering increase the chance of sunflowers becoming infected with Phomopsis stem canker. The fungus can reduce yields in affected fields by 40 to 50 percent, according to South Dakota State University field crops pathologist Febina Mathew.

“Fungicides can help, but timing is critical,” said Mathew. That’s why she is developing a disease-forecasting model to help farmers manage stem canker in sunflowers. The three-year project is supported by $300,000 U.S. Department of Agriculture grant through the Critical Agricultural Research and Extension program.  The project also involves Extension pathologists Sam Markell of North Dakota State University and Bob Harveson of the University of Nebraska-Lincoln.

“This disease could have a significant impact on the sunflower industry, if we don’t come up with a solution,” Mathew said, noting 80 percent of the nation’s sunflowers are produced in the Midwest. The fungus overwinters in plant debris and, recently, researchers identified soybean and weeds as reservoirs for the stem canker pathogens. The spores are spread by wind and rain splash.

South Dakota Oilseeds Council Executive Director Rick Vallery said, “Phomopsis stem canker is a very serious disease for the sunflower industry. We are interested in any and all research related to this disease.”

Part of the problem is the disease varies, with greater losses some years than others and a lot depends on how fast it spreads, Vallery explained. He anticipates the model will identify factors that affect rate at which the diseases spreads.

“The model was developed using information technologies originally developed in response to the threat of Asian soybean rust,” Mathew explained. She is working with professor Scott Isard of Pennsylvania State University and Roger Magarey, a senior researcher at the North Carolina State University Center for Integrated Pest Management.   Their work in cooperation with the precision agriculture company ZedX inc, has led to the development of the integrated Pest Information Platform for Extension and Education (iPiPE).

The iPiPE is an internet platform that allows for the national sharing of pest observations and pest and disease model outputs. “They have a lot of experience developing weather-based forecasting model to help growers with timing fungicide applications and manage diseases,” Mathew said.

Once the stem canker forecasting model has been fully validated, the risk maps will be available on the National Sunflower Association website along with instructions to help farmers use the model.

National Sunflower Association Executive Director John Sandbakken said, “Having this model will allow growers an opportunity to get ahead of the disease and spray at the appropriate time to try to mitigate losses. This will be a very valuable tool.”

Mathew has been at the forefront of the fight against Phomopsis stem canker since the 2010 epidemic devastated the Midwestern sunflower crop. “We always believed only one pathogen caused the disease,” she explained. While doing her doctoral work at NDSU, Mathew identified a second stem canker-causing pathogen. Last year, a third pathogen was identified in Minnesota.

“The problem is growing, yet options for farmers to manage the disease are very limited,” she said. Though seed companies are trying to develop resistant hybrids, current varieties offer only partial resistance.

Previously, Mathew, Markell and Harveson found the strobilurin chemical family of fungicides, specifically FRAC group 11 in products such as Headline, can be effective against Phomopsis stem canker, but timing is the critical issue. “How to time the spraying is the million-dollar question,” Markell said.

Vallery elaborated: “Only one fungicide works and there’s a very short window of opportunity, about 10 days. If you put it on too early or too late, it doesn’t do any good.”

“We are developing the disease-forecasting model so farmers know when to spray fungicides,” Mathew said. A similar model developed in France has worked well to manage stem canker in Europe. Doctoral student Krishna Ghimire has been working on the model since last year and Marina Johnson, a postdoctoral researcher, joined the group this year.

The model is being validated using six locations—three in South Dakota, one in Nebraska and two in North Dakota. “These are areas where cooler, wetter conditions tend to occur and where we know there has been disease,” Mathew noted. “We compare spraying fungicide based on root stage with what the model tells us.” In addition, they evaluate disease severity and impact on yield.

Markell explained the fungicide trials and data on the pathogens can help test the timing. “Harveson’s and my role is to provide some arms and legs for Febina when she is developing the model,” he said. In addition, the researchers are also working with industry partners and sunflower farmers. “It’s a good relationship,” Markell added.

After analyzing results from the first testing season, Mathew said, “We identified factors, besides weather variables, that play an important role in the development of Phomopsis stem canker of sunflower.”  These include number of years since previous sunflower crop, number of Phomopsis-infected plants in previous sunflower crop, whether sunflower is planted under irrigated conditions and whether Phomopsis stem canker was observed in the last five years.

The model will continue to be validated in 2018 and 2019 in Nebraska, North Dakota and South Dakota.