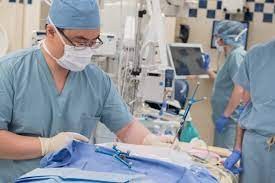 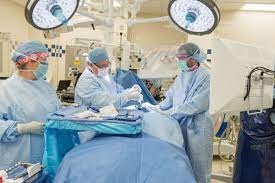 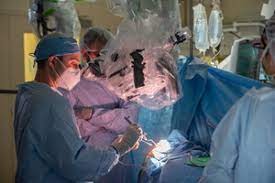 Newswise — DETROIT – Henry Ford Cancer Institute is the first-in-Michigan and second-in-the-world to complete an innovative cancer treatment known as Spinal Laser Interstitial Thermal Therapy (SLITT), which destroys cancer cells that are adjacent to the spine without the need for open surgery. SLITT is a minimally-invasive procedure that allows a patient to recover within days, instead of months of recovery that are necessary for open surgery.

“We’ve offered laser ablation as an effective brain cancer treatment since 2013, but using it to treat cancer that has metastasized to the spine is a newer approach,” said Henry Ford Cancer Institute neurosurgeon Ian Lee, M.D. “Cancer metastasizing to the spine is common, and SLITT will offer many patients a treatment option with quicker recovery and reduced risk of infection.”

For Jacquelyn Donley, SLITT was a promising alternative treatment option for what would otherwise require a more invasive open surgery.

Jacquelyn’s journey with cancer began when she was diagnosed with lung cancer in 2013. Following the successful removal of the left lobe of her lung, she underwent radiation and chemotherapy treatments. These were effective for her until 2017, when she had a recurrence that doctors learned had metastasized to a different area of her body – her spine.

To treat her metastasized cancer, Jacquelyn was treated by Mira Shah, M.D., radiation oncologist at the Henry Ford Cancer Institute. Dr. Shah treated the cancerous lesion on her spine using the Edge® Radiosurgery System. Following the procedure, all signs of cancer on Jacquelyn’s spine were gone until the spring of 2019, when it appeared again. Dr. Shah and Dr. Lee discussed Jacquelyn’s case and determined that she would be a strong candidate for SLITT – a new procedure that Dr. Lee had learned from Claudio Tatsui, M.D., neurosurgeon at MD Anderson Cancer Center in Houston, Texas, who was first in the world to perform it.

For patients who have cancer that has metastasized to their spine, stereotactic radiation therapy is a common treatment utilized. But, if the tumor is touching the spinal cord, it must be separated before stereotactic radiation can be safely used. Prior to SLITT, patients would have to undergo open surgery to treat these tumors. As was the case with Jacquelyn, SLITT is ideal for patients who have already received the maximum cumulative dose of radiation to the spine and are not strong candidates for open surgery.

Since undergoing SLITT, Jacquelyn is recovering well and is thankful for both her expert care and having SLITT as a new treatment option.

“Dr. Lee explained what this procedure was, and why it made sense for me,” Jacquelyn said. “He is a fantastic doctor, has phenomenal bedside manner and made me feel like I was his only patient. He answered all of my questions and I am very grateful he took care of me.”