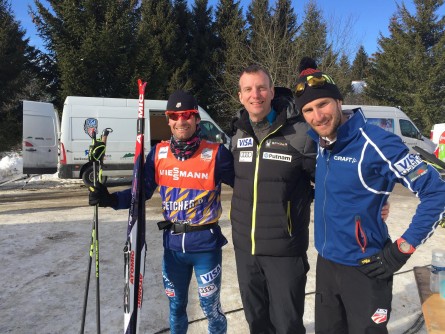 Dr. Guyer is flanked by the Fletchers brothers - Taylor on the left and Bryan on the right

Newswise — DETROIT – When the ski and snowboard competitions get under way at the 2018 Winter Olympic Games in Pyeongchang, South Korea, watching and following with interest will be Christopher Guyer, M.D., a Henry Ford Hospital sports medicine physician and a team physician for the U.S. Ski & Snowboard Association.

Even though he is not assigned to the Games, Dr. Guyer will be closely monitoring the performances of many of the athletes he’s cared for since he became a USSA physician four years ago.

“I’ll be following the Fletcher brothers – Bryan and Taylor – in the Nordic Combined event and our teams in slopestyle and halfpipe,” Dr. Guyer says.

Dr. Guyer is part of a medical pool of physicians who are assigned to small care teams by USSA that travel to national and international ski and snowboard competitions. They diagnose and treat sports-related injuries suffered by U.S. athletes. His last competition was the Burton U.S. Open snowboarding championships in Vail, Colo. and Nordic Combined World Cup, both in 2017.

“I’ve always had an interest in the sport of skiing,” says Dr. Guyer, an avid skier and snowboarder, skills that come in handy when navigating a course to get to an injured athlete in the field at competition. “I did additional training in Park City, Utah, Killington, Vermont and Big Sky, Montana and trained with doctors experienced in ski medicine. I’m proud to represent my country and Henry Ford in the care and work I provide for USSA.”

“We’re extremely proud of the work our sports medicine physicians do and have done with our U.S. national teams,” says Vasilios (Bill) Moutzouros, M.D., chief of the Division of Sports Medicine at Henry Ford. “Drs. Guyer, White and Kolowich are exceptional, experienced physicians.”

When on assignment, Dr. Guyer works with U.S. athletic trainers and nutritionists to ensure the athletes are performing at their highest levels. During peak training, he says, athletes consume 9,000 calories a day, thus requiring disciplined eating habits.

Once competition ends, though, the athletes are known to splurge on plates of pasta, burgers and shakes, and the like, he says.

Hydration is crucial to performance, no matter the climate, Dr. Guyer says. The forecast for Pyeongchang, one of the coldest parts of South Korea that sits about a half mile above sea level, is bitterly cold temperatures and blustery winds. Temperatures there are often in the single digits in the month of February. “Water and sports drinks are best for hydrating,” Dr. Guyer says.

The medical staff is also challenged with ensuring that athletes strictly adhere to medications acceptable for national and international competition. “We carry medications that we know are safe,” Dr. Guyer says, “and we routinely reference and research what we’re carrying.”

Advances in CT, MRI and ultrasound imaging and surgical procedures, Dr. Guyer says, has allowed athletes to recover from injury – U.S. alpine ski racer Lindsey Vonn a notable example – and return to sport at high levels and extend their career. Biomechanical conditioning, a video analysis to correct form and balance issues that could lead to injuries, is a mainstay in sports conditioning for athletes at all levels – weekend warrior to Olympic and professional athlete.

“While there’s no limit to the number of surgeries an athlete can have, you do have to consider the time required for recovering from surgery and the risk of repeating an injury,” Dr. Guyer says. “There’s also the risk of arthritis developing.”

Of course, advances in equipment technology have played a role in improving performance while keeping athletes safe, Dr. Guyer says.  Helmets are lighter and stronger and skis and snowboards are lighter, though all equipment must meet specific regulations for competition. And don’t be deceived by the sleek ski or bulky snowboarding uniforms. Beneath them are the so-called armor of elbow, knee and back pads.

So, when the competition heats up, rest assured Dr. Guyer will be among the millions of viewers taking it all in. He does, after all, have a vested interest in seeing his patients do well.