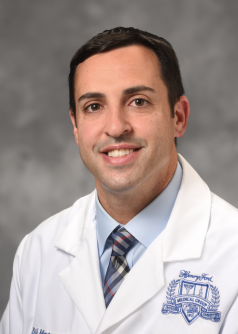 Newswise — DETROIT (November 17, 2021) – A study by Henry Ford Health System published in the October issue of The American Journal of Sports Medicine provides a promising answer to the question “Can patients effectively manage their pain after ACL knee reconstruction surgery without opioids?”

“The study constitutes practice changing research,” said Vasilios (Bill) Moutzouros, M.D., chief of Sports Medicine at Henry Ford and the study’s lead author. “The data is powerful in showing we can do such a complex surgery and control post-operative pain without the need for opioid medications.”

The retrospective study involved 62 patients who underwent anterior cruciate ligament reconstruction between February 2019 and January 2020. Of those patients, 28 received opioids for pain control and 34 received opioid-free pain medicines that included nonsteroidal anti-inflammatories, acetaminophen, and muscle relaxers. Researchers reported that pain scores from the opioid-free group were equivalent to those who received opioids to manage their pain There were no significant differences in side effects between the two groups. Drowsiness and constipation were the most adverse side effects in both groups.

Studies have shown that patients can become addicted to their opioid pain control medications after various types of surgery including ACL reconstruction. “Our non-opioid approach is a pro-active response to advancing pain management practices for our patients,” Dr. Moutzouros said.

“ACL injury patients and parents of young patients really appreciate the ability to have surgery and have no concern of opioid exposure and chance of misuse.”.

In response to the opioid epidemic and ongoing efforts to reduce opioid misuse, Dr. Moutzouros sees the study’s findings as another important step toward the reduction and potential elimination of addictive opioids for pain management of all types of surgeries.

The study resulted from Henry Ford’s broader initiative launched in 2016 to reduce the number of opioid pills and patches. In 2019, the State of Michigan enacted new laws regulating the prescribing and dispensing of controlled substances including opioid painkillers. From 1999 to 2016, Michigan saw a 17% increase in fatal prescription drug and opioid overdoses.

The health system has more than 33,000 employees and is home to the 1,900-member Henry Ford Medical Group, one of the nation’s most recognized physician groups. More than 2,500 physicians are also affiliated with the health system through the Henry Ford Physician Network and Jackson Health Network.

Henry Ford Health System is also one of the nation’s major academic medical centers, receiving nearly $100 million in annual research funding, among Michigan’s largest NIH-funded institutions. Also, an active participant in medical education and training, the health system has trained nearly 40% of physicians currently practicing in Michigan and provides education and training for other health professionals including nurses, pharmacists, radiology and respiratory technicians.

The American Journal of Sports Medicine