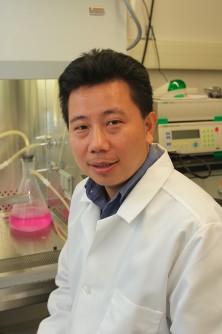 Infection of liver cells (green) by a non-resistant virus (left panel) is efficiently cleared by drug treatment. This same drug treatment has no effect on a resistant form of the virus (right) and infection can therefore persist (green).

Newswise — In recent human trials for a promising new class of drug designed to target the hepatitis C virus (HCV) without shutting down the immune system, some of the HCV strains being treated exhibited signs of drug resistance.

In response, an interdisciplinary team of Florida State University biologists, chemists and biomedical researchers devised a novel genetic screening method that can identify the drug-resistant HCV strains and the molecular-level mechanisms that make them that way –– helping drug developers to tailor specific therapies to circumvent them.

More than 170 million people worldwide are infected with HCV, which leads to both acute and chronic liver diseases.

“In collaboration with pharmaceutical firm Gilead Sciences and researchers from the University of Heidelberg (Germany), what our research team discovered was how the latest drug for HCV works and what changes in the virus that makes it resistant to this unique therapy,” said Hengli Tang, a Florida State University molecular biologist.

“This is knowledge that is essential to drug developers focused on HCV,” said Tang, “but equally important is that our method, which we call ‘CoFIM’ (Cofactor-independent mutant) screening, can also be applied to other drug targets and other viruses.

“And, since we now understand how this latest class of drug works and what causes resistance to it, we can better select other classes of drugs with distinct mechanisms –– in other words, those that target other parts of the virus –– in order to craft a combination therapy, which is the future of HCV therapy and the key to overcoming drug resistance.”

The groundbreaking research is described in a paper published online in the September 2010 issue of the journal PLoS Pathogens.

Driving the team’s development of CoFIM screening was the need to identify key “cellular cofactors” and their mechanisms of action –– a fundamental aspect of virus-host interaction research.

“’Cellular cofactors’ are proteins that normally exist in host cells that have been hijacked by viruses to facilitate viral replication.” Tang said. “They became accomplices to the invading viruses.

“Our research team was the first to show that ‘cyclophilin A’ (CyPA) is an essential cellular cofactor for hepatitis C virus infection and the direct target of a new class of clinical anti-HCV compounds, which include cyclosporine A (CsA)-based drugs that are devoid of immunosuppressive function,” Tang said.

“In addition, we went a step further than other research teams by employing our newly developed CoFIM screening method, which we used to demonstrate not only HCV’s dependence on cellular cofactor cyclophilin A and susceptibility to cyclosporine A drugs but also to uncover the molecular-level regulators that determine those two traits in the virus.”

Those molecular-level regulators are known as “small interfering RNA libraries” –– collections of molecules so named for their size and ability to suppress gene expression. They act to individually suppress every gene in the cell, resulting in different consequences depending upon which gene is suppressed by a given member in the library.

The CoFIM screening method involves inducing or “coaxing” the HCV virus to mutate by itself, in vitro, absent the replication assistance it normally receives from a particular cellular cofactor. Then, CoFIM tracks the changes in the virus’s response both to CsA-based drugs and any other drug designed to inhibit the cofactor.

Funding for the research conducted at Florida State University came in largest part from a $1.4 million grant awarded by the National Institutes of Health (NIH). And, because chronic liver disease caused by HCV can lead to liver cancer, a grant from the American Cancer Society provided additional support. 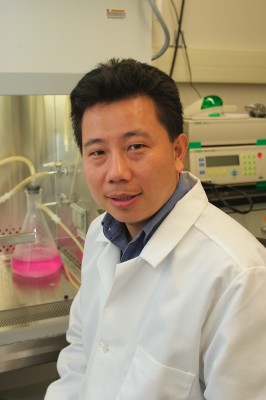 Caption: Infection of liver cells (green) by a non-resistant virus (left panel) is efficiently cleared by drug treatment. This same drug treatment has no effect on a resistant form of the virus (right) and infection can therefore persist (green).