Newswise — BIRMINGHAM, Alabama — There’s no telling where the call will come from, or when. But Randy Cron, M.D., Ph.D., professor of pediatrics and medicine at UAB, knows to expect them.

“Not a week goes by when I don’t get a call from someone on the planet asking, ‘Does this seem like it’s it?’” Cron said. The “it” in question goes by several names in the medical literature. But the one Cron has chosen for his new textbook, the first of its kind, is Cytokine Storm Syndrome (Springer, 2019).

The calls tend to be urgent. A cytokine storm — aka cytokine release syndrome, macrophage activation syndrome, hemophagocytic lymphohistiocytosis — is the result of an immune system gone wild. Killer cells are often defective, resulting in increased production of inflammatory proteins that can lead to organ failure and death. The title of a 2015 article in the Journal of Immunology by Cron and his former trainee and long-time collaborator, Edward Behrens, M.D., of the University of Pennsylvania, captures the stakes doctors face: Kill or Be Killed.

The good news is that “we now have a variety of therapeutic options to treat cytokine storm syndrome,” Cron said. “But especially a lot of the older physicians don’t know what this is.” That was one of Cron’s primary motivating factors in writing his book, he said. “Cytokine Storm Syndrome” offers detailed descriptions of symptoms and clinical presentations, along with the latest treatments and care regimens. “The sooner you recognize it, the better the outcomes,” Cron said. “If we can get people to diagnose this in the ER and the ICU, that would be ideal.”

Up to 15% of the population

“Cytokines are inflammatory immunologic proteins that are there to fight off infections and ward off cancers,” Cron explained. “But when they’re out of control they can make you very ill.”

Cron’s research has shown that cytokine storm syndrome is much more common than previously thought — as is the number of people at risk. Scientists seeking the cause of cytokine storm syndrome have focused their attention on the perforin pathway, the series of proteins that work together to deliver perforin. Perforin is a key weapon of the immune system’s cytotoxic T-cells and natural killer cells. They use it to punch holes in the walls of infected, cancerous or otherwise undesirable cells. Then they use these perforin channels to pour in toxic granzyme B, which induces the cells to self-destruct. Mutations in the genes responsible for “any one of the 10-plus proteins that get perforin to do what it does” are linked to a higher risk of cytokine storm syndrome, Cron said.

Some 10% to 15% of the population may carry these mutations, according to Cron’s calculations. Unlike infants, who tend to have two bad copies of one of the 10+ perforin-associated genes, these people have one mutated copy and one normal copy. “Generally, that’s enough to produce all the killing you need,” Cron said. “But if you get the wrong organism or the wrong inflammatory state it may push you over the edge.”

“These patients almost always present with fever, something like 96 percent, and they tend to be sicker than you would expect for why they are in the hospital,” Cron said. “Even sepsis patients will get cytokine storm syndrome on top of the sepsis, and if you don’t treat the cytokine storm syndrome, even if you treat the infection causing the sepsis, they may still die.”

Unfortunately, “there are a lot of triggers for this,” Cron said. “In addition to rheumatic diseases, such as juvenile arthritis and lupus, certain types of blood cancers, like leukemias and lymphomas,” can cause cytokine storm syndrome, he said. “And there are a whole slew of infections that can do this, including the herpes virus family (including the bug that causes mono and CMV), Ebola, dengue — there are 80 to 100 bugs that have been associated with it in case reports.” Also reported, although less common, are cases of cytokine storm syndrome in patients with rare metabolic disorders and in patients who go on heart-lung bypass machines such as ECMO.

Recently, cytokine storms also have been noted in patients treated with the new chimeric antigen receptor T-cell therapy (CAR-T) as immunotherapy for cancer. “They see that in about 20% to 30% of cases,” Cron said. “CAR-T saves the patient’s life, but it also triggers this.”

In a 2016 study, Cron and colleagues found evidence of perforin pathway-related mutations in five of the 14 samples they analyzed from patients who died in the 2009 H1N1 flu outbreak. More than 270,000 people were hospitalized and nearly 12,500 died in the H1N1 pandemic in the United States, according to estimates from the Centers for Disease Control and Prevention. As many as 575,000 people died worldwide, 80 percent of them people younger than age 65, the CDC said. Cytokine storm syndrome was a contributing factor in this abnormally high number of deaths in otherwise healthy individuals, Cron believes.

The syndrome was first identified (as hemophagocytic lymphohistiocytosis, or HLH) as a rare genetic disease in pediatric patients in the 1950s. Most infants born with HLH died within a few days to weeks. Even today, when chemotherapy and bone marrow transplantation are used, the chances of children with primary HLH living to age 5 are only about 50%, Cron said.

But for other patients, new treatments can calm the storm and bring remarkable recoveries. Cron and Behrens “both got interested in this through a patient we saw in Pennsylvania,” Cron said. “Probably the sickest patient I ever saw come out of the ICU unscathed.” The doctors treated her with anakinra, a cytokine-targeting therapy that was approved to treat the autoimmune disease rheumatoid arthritis. “She turned around and it was magical,” Cron recalled. “We’re both research scientists, so he developed a mouse model [of cytokine storm syndrome] and I’ve been studying the genetic and human aspects. We’ve identified new genes not previously described as a part of this genetic workup.”

In 2016, Cron and Winn Chatham, M.D., professor in the Division of Clinical Immunology and Rheumatology, began a clinical trial at UAB and Children’s Hospital to study the safety of anakinra in patients with signs of severe, potentially life-threatening inflammation. Cron is director of the Division of Pediatric Rheumatology at Children’s of Alabama. Anakinra is “remarkably safe,” and following this initial study, the researchers hope to begin a larger trial in the future.

A cheap, simple test, widely available at most hospitals in the United States and worldwide, can help diagnose cytokine storm syndrome, Cron said. “A protein called serum ferritin tends to get very high in this disorder,” he said. “If you are sick enough to be in a hospital and you have a fever, you should get a serum ferritin. It typically comes back in less than 24 hours and almost every hospital can do it, and if it’s high you can work them up for cytokine storm syndrome.”

At Cron’s urging, the ICU at Children’s Hospital recently added serum ferritin screens to its routine procedures. “The day after we did that we identified a patient and we’ve had three kids in the last couple of months that we’ve identified,” Cron said.

Cron hopes that “Cytokine Storm Syndrome” will help spread this life-saving knowledge more widely in the medical profession. “We have this thing in medicine called Occam’s Razor, which encourages us to gather the data and come up with one unifying diagnosis for what’s going on,” Cron said. “But this is the opposite — you can have juvenile arthritis, or lupus or T-cell leukemia, and then you have cytokine storm syndrome on top of that. And if you don’t treat the cytokine storm syndrome directly, patients can die.

“If we get to the point where people know about it and don’t have to call me to find out, that would be a success.”

Why so stormy? What lies behind cytokine storm syndrome?

Why does the immune system overreact in cytokine storm syndrome? One clue came in a “really lovely paper” by Australian researchers in 2015, Cron said. They took normal natural killer cells and CD8 cytotoxic T-cells, along with version of these cells that were perforin deficient. Then “they did time-lapse photography at the cellular level” as these cells engaged with infected cells, Cron explained. The cells with perforin deficiencies “spent five times longer engaged” and released a flurry of cytokines, even though their lack of perforin made them incapable of destroying their target cell. One hypothesis is that these signals could spark the intense inflammatory response seen in cytokine storm syndrome. 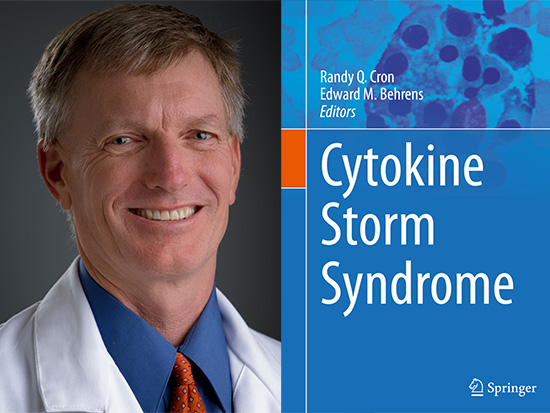 Caption: UAB pediatric rheumatologist Randy Cron gets calls from doctors around the globe asking if their patients have cytokine storm syndrome. Now he has co-authored the first textbook on this mysterious and deadly condition with his former trainee.

Caption: UAB pediatric rheumatologist Randy Cron gets calls from doctors around the globe asking if their patients have cytokine storm syndrome. Now he has co-authored the first textbook on this mysterious and deadly condition with his former trainee.