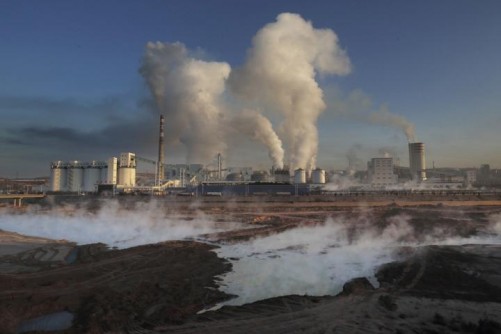 Newswise — DURHAM, N.C. -- China's plan to ramp up production of new chemicals and synthetic fuels made from coal could derail recent efforts to lower its carbon dioxide emissions and instead lock the Chinese government into high-carbon investments for years to come, a new Duke University study finds.

"The high-carbon coal chemicals being developed as part of its new national action plan should not be qualified as 'clean coal' unless they incorporate carbon sequestration to lower their carbon footprints," said Chi-Jen Yang, research scientist at Duke's Nicholas School of the Environment.

In April 2015, China's National Energy Administration announced a new action plan to guide the country's clean coal policies. Most of the actions the plan calls for -- such as boosting the efficiencies of new coal-fired power plants and industrial boilers, and washing raw coal more thoroughly to lower its ash content and improve its burning efficiency -- will significantly help reduce China's carbon footprint, Yang said.

But the plan also calls for demonstrating and developing new industries to produce chemicals and fuels derived from coal. These include synthetic natural gas, synthetic gasoline and diesel, and coal-derived olefins such as ethylene and propylene, which can be made into plastics, synthetic rubber, detergents, lubricants and additives. Chinese officials hope production of the new chemicals will boost the nation's economy.

"The problem," said Yang, "is that despite being described in Chinese government documents and media reports as low-carbon, highly efficient clean coal technologies, these 'modern coal chemical' industries have very high carbon footprints."

Of the dozens of new facilities being built or operated across China to produce the coal-derived chemicals, only two sites have carbon capture and sequestration capabilities, Yang said, and at both of these plants, the capacity is very small.

"One plant captures about four percent of its total carbon emissions; the other captures only one percent," he said. "That's especially troubling, considering the amount of carbon dioxide the coal-to-chemicals processes emit."

The coal-to-olefins process emits about 5.8 metric tons of carbon dioxide for each metric ton of olefins produced. That's nine times more emissions than if ethane was used instead of coal to make the olefins, and seven times more than if naphtha, a liquid hydrocarbon mixture, was used.

"China's coal-to-olefins capacity was expected to reach about 12 million metric tons by the end of last year," Yang said. "That equates to nearly 70 million metric ton of additional carbon dioxide being emitted into the atmosphere." Globally, China is the only nation where coal is used to make olefins, he added.

Synthetic gasoline and diesel emit more than one-and-a-half times the amount of carbon dioxide than petroleum-based gasoline or diesel over their life cycle. Chinese officials aim to increase the nation's annual output of these coal-derived fuels to roughly 6.6 million metric tons by 2020.

Synthetic natural gas emits about three times as much carbon dioxide per cubic meter of fuel produced as regular natural gas. Enthusiasm for synthetic natural gas has waned recently due to environmental concerns and poor results at some pilot plants, but the Chinese government has already approved the construction of nine new facilities with a total capacity of producing 37.1 billion cubic meters of synthetic natural gas annually and Yang said these plants will likely continue to operate even if they are not profitable.

According a recent database compiled by Greenpeace East Asia, if all coal-to-chemicals projects that are currently proposed were to go on line in coming years, China's total high-carbon investment could top $300 billion U.S. dollars, compared to the $83 billion it spent on clean energy in 2014.

"If you look at the broader picture, China is doing a lot of right things to reduce its carbon emissions," Yang said. "The only wrong thing it is doing is the development of these coal-to-chemicals industries. If it keeps promoting coal-to-chemicals, its high-carbon investment will far outweigh its clean energy investment. Such a contradictory policy deserves greater scrutiny from the international community."