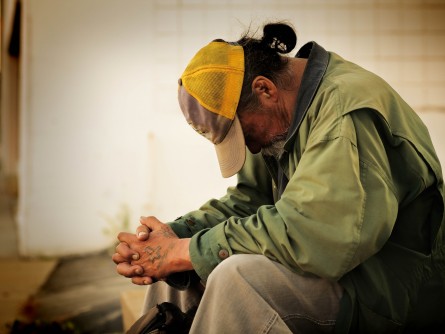 Newswise — BOSTON (June 8, 2018, 2:00 p.m. ET)—A new cross-sectional study led by public health researchers at Tufts University School of Medicine has found significant food insecurity for adults on probation in Rhode Island. The research team found that nearly three-quarters of the 304 study participants experienced food insecurity over a 30-day period, with almost half having very low food security. The study is published today in PLOS ONE.

“Our study is among the first to assess food insecurity and food acquisition methods for adults on probation. The high levels of food insecurity we identified suggest that access to foods on a regular basis is a widespread problem for individuals on probation,” said last author Aviva Must, Ph.D., professor and chair of the public health department at Tufts University School of Medicine.

“More than half of participants – 58 percent – with very low food security reported not eating for a whole day for an average of nine days in one month,” said lead author Kimberly Dong, Dr.P.H., M.S., R.D., research assistant professor in public health at Tufts. Dong did this work as part of her dissertation at Tufts University School of Medicine.

“Criminal justice reform is often focused on prisons, but this study suggests that reforms also need to target what happens after prisoners are released into the community. Given the high rates of incarceration in the U.S., this public health problem will only get bigger unless we address it. Identifying those who are at greatest risk for food insecurity – in our study, often relating to homelessness and depression – is a step forward,” she continued.

The team obtained data for each participant on food acquisition meal patterns and meal preparation along with sociodemographics, correctional supervision history, depression, hazardous alcohol use, illicit drug use, and address or area of residence (GIS). Questions included: where do you normally get food; do you usually eat breakfast, lunch or dinner; and how often do you have help preparing a meal?

Depression was more common in participants with very low food security (73 percent) compared to other participants.

“The prevalence of food insecurity and very low food security among adults on probation was extremely high compared to the general population, indicating a critical need for action. We identified characteristics of probationers most at risk for food insecurity, which includes being homeless, depressed, and lacking social support for meal preparation. These findings can inform development of targeted interventions and policies to mitigate health disparities in this marginalized population,” said Dong. Her upcoming related research focuses on health measures and access to care for people on probation.

Of the 304 participants, the median age was 36 years, 53 percent were non-Hispanic white, and 28 percent were female. The highest level of education attained for many participants was high school (42 percent). Only one-quarter of the participants had a child currently living with them, 22 percent had a full-time job, almost two-thirds (63 percent) had an individual annual income of less than $10,000, 28 percent always had access to a car and almost three-quarters (73 percent) of participants received SNAP benefits. Current drug use in the past 30 days was reported by 19 percent of the participants and 24 percent currently consumed alcohol at a hazardous level. Depression was identified in 56 percent of participants.

Limitations to the study include the inability to assess temporal relationships due to the cross-sectional study design and potential limited generalizability since the study is based on a convenience sample in one probation office in a small state.

Rhode Island has the second highest rate of community corrections supervision in the nation with 23,823 adults on probation (or about 2.8 percent of the state population). There are 11 probation offices across the state and this study took place in an office that supervises 12 percent of the people under community corrections in RI. The study enrolled English-speaking adults that were under probation supervision at this office between July and October 2016.

About Tufts University School of Medicine