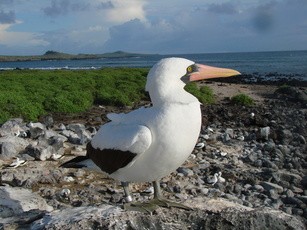 Newswise — The Nazca booby, a GalÃ¡pagos Island seabird, emerges from its shell ready to kill its brother or sister. Wake Forest University biologists and their colleagues have linked the murderous behavior to high levels of testosterone and other male hormones found in the hatchlings.

The study appeared in the June 18 edition of the online journal PLoS ONE available at http://www.plosone.org/doi/pone.0002460.

The elevated levels of male hormones, called androgens, increase aggression in both male and female chicks and prepare the birds to fight to the death as soon as they hatch, said David J. Anderson, professor of biology at Wake Forest and project leader.

Much of the field work was completed by Martina MÃ¼ller, while she was a graduate student at Wake Forest. MÃ¼ller, lead author of the study, is now a doctoral student at the University of Groningen in the Netherlands.

"The older of two Nazca booby hatchlings unconditionally attacks and ejects the younger from the nest within days of hatching," Anderson said. Because Nazca boobies have difficulty raising more than one chick, it is important for the older chick to vanquish the younger one in order to increase its own chances of survival.

According to the study, the high hormone levels also cause the surviving chicks to behave like bullies after they grow up. They frequently seek out nestlings in their colony, and during those visits they often bite and push around the defenseless youngsters.

The researchers suspect that the Nazca booby hatchlings experience the high level of aggression-related hormone during a "sensitive period" in their growth, when long-term growth patterns are easily affected.

"The hormones that are part of this epic battle early in life seem to permanently change some aspects of their social personality," Anderson said.

Nazca booby chicks have aggression-related hormone levels three times as high as their less aggressive cousins, the blue-footed boobies. Blue-footed boobies do not have the same lethal fights right after hatching and do not go on to bully their fellow birds as adults.

The research is part of a long-term study by Anderson that has included monitoring more than 16,000 Nazca booby nests at Punta Cevallos, Isla Espanola, in the GalÃ¡pagos Islands since 1984.