By liquefying cells with ultrasound, researchers lay bare cellular scaffolding that could serve as a template on which to grow new tissue 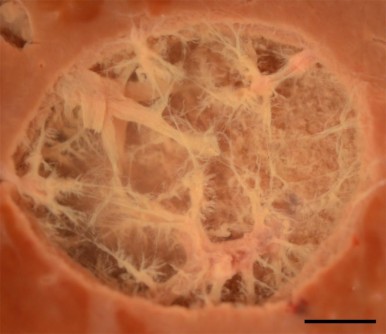 A cross section through a histotripsy lesion created in bovine liver tissue with the liquified cellular contents washed out revealing the remaining extracellular matrix. The scale bar represents 5mm.

Newswise — WASHINGTON, D.C., October 30, 2014 – Researchers at the University of Washington have developed a way to use sound to create cellular scaffolding for tissue engineering, a unique approach that could help overcome one of regenerative medicine’s significant obstacles. The researchers will present their technique at the 168th meeting of the Acoustical Society of America (ASA), held October 27-31, 2014, at the Indianapolis Marriott Downtown Hotel.

The development of the new technique started with somewhat of a serendipitous discovery. The University of Washington team had been studying boiling histotripsy -– a technique that uses millisecond-long bursts of high-intensity ultrasound waves to break apart tissue -– as a method to eliminate cancerous tumors by liquefying them with ultrasound waves. After the sound waves destroy the tumors, the body should eliminate them as cellular waste. When the researchers examined these ‘decellularized’ tissues, however, they were surprised by what the boiling left intact.

“In some of our experiments, we discovered that some of the stromal tissue and vasculature was being left behind,” said Yak-Nam Wang, a senior engineer at the University of Washington’s Applied Physics Laboratory. “So we had the idea about using this to decellularize tissues for tissue engineering and regenerative medicine.”

The structure that remains after decellularizing tissues is known as the extracellular matrix, a fibrous network that provides a scaffold for cells to grow upon. Most other methods for decellularizing tissues and organs involve chemical and enzymatic treatments that can cause damage to the tissues and fibers and takes multiple days. Histrostipsy, on the other hand, offers the possibility of fast decellularization of tissue with minimal damage to the matrix.

“In tissue engineering, one of the holy grails is to develop biomimetic structures so that you can replace tissues with native tissue,” Wang said. Stripping away cells from already developed tissue could provide a good candidate for these structures, since the extracellular matrix already acts as the cellular framework for tissue systems, Wang said.

Due to its bare composition, the matrix also induces only a relatively weak immune response from the host. The matrix could then theoretically be fed with stem cells or cells from the same person to effectively re-grow an organ.

“The other thought is that maybe you could just implant the extracellular matrix and then the body itself would self-seed the tissues, if it’s just a small patch of tissue that you’re replacing,” Wang said. “You won’t have any immune issues, and because you have this biomimetic scaffold that’s closer to the native tissue, healing would be better, and the body would recognize it as normal tissue.”

Wang is currently investigating decellularization of kidney and liver tissue from large animals. Future work involves increasing the size of the decellularized tissues and assessing their in-vivo regenerative efficacy.

ABOUT THE MEETINGThe 168th Meeting of the Acoustical Society of America (ASA) will be held October 27-31, 2014, at the Indianapolis Marriott Downtown Hotel. It will feature more than 1,100 presentations on sound and its applications in physics, engineering, and medicine. Reporters are invited to cover the meeting remotely or attend in person for free. PRESS REGISTRATIONWe will grant free registration to credentialed journalists and professional freelance journalists. If you are a reporter and would like to attend, contact Jason Bardi ([email protected], 240-535-4954), who can also help with setting up interviews and obtaining images, sound clips, or background information.

168th meeting of the Acoustical Society of America